“Life is short. Buy the shoes!” reads a cushion resting on the bed of British accessories designer Sophia Webster. It’s just one of the many playful touches in her East London house that reflect her mission to put the fun back into luxury fashion. Paper lanterns shaped like ice creams hang from the trees in the garden and a half-eaten chocolate cake made to resemble a Disney princess in a frothy yellow ballgown bears witness to her daughter Bibi Blossom’s third birthday party the day before. Webster is wearing a cat-print jumper that reaches down to her knees (she’s a dainty five-foot-one) and bright pink fluffy slippers, while Bibi is clearly still in party mood as she runs around dressed in a bright pink flamingo onesie. 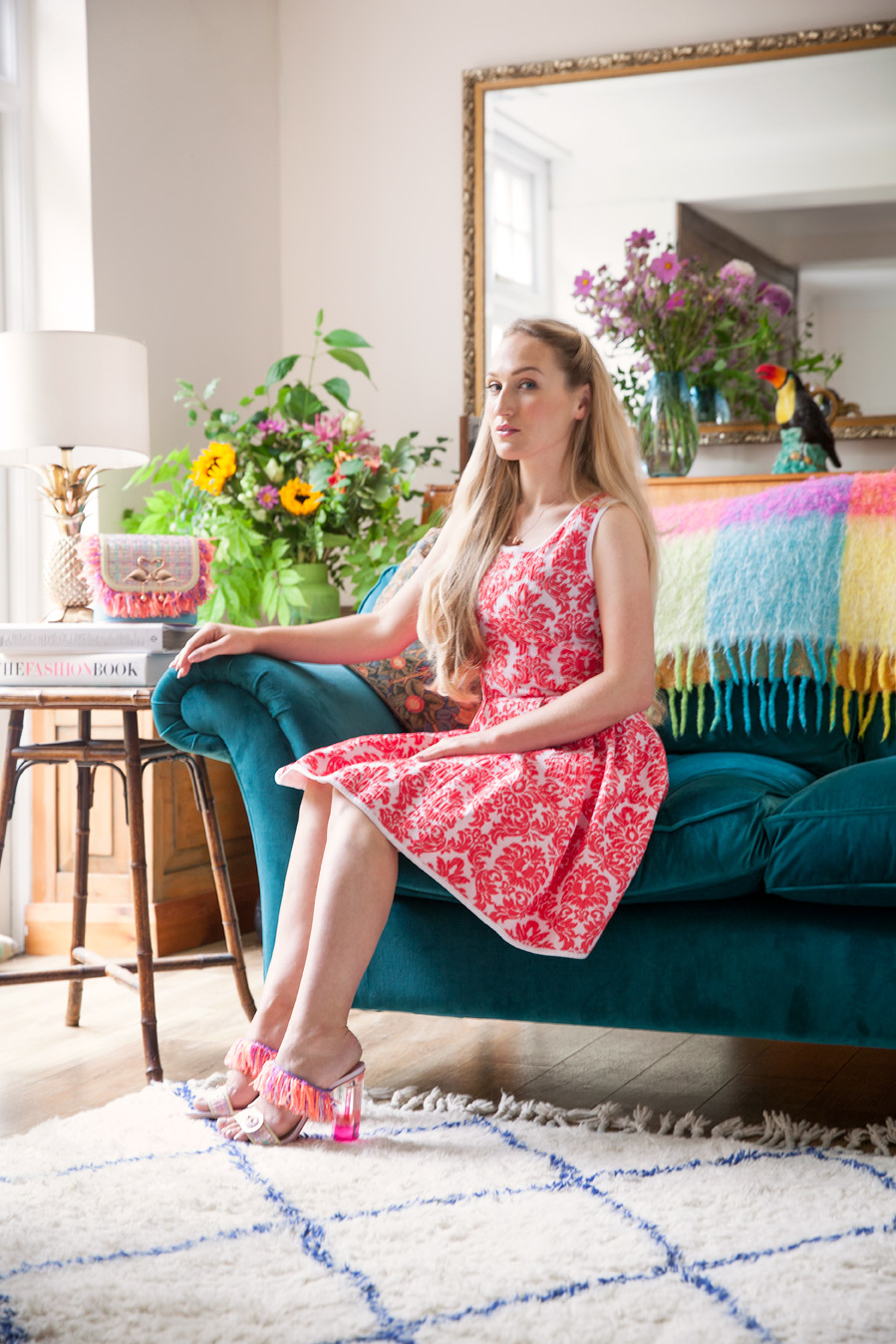 Webster in her living room.
Calf leather and raffia heels; and calf leather and cotton bag (on table), both from Sophia Webster. Vivetta dress, Webster’s own.

Yet, there is no doubt about the seriousness with which Webster approaches her business. Combining exuberantly feminine designs with a strong sense of sophistication, she not only produces eight adult shoe collections every year, but also brings out two more for children, as well as four handbag lines, and bridal pieces into the bargain. “I love adding different product categories but it has to be the right timing. I designed the kids’ shoes when I was pregnant and they’ve been a huge success. But really I was just being selfish because I wanted cute shoes to put Bibi in,” she laughs. 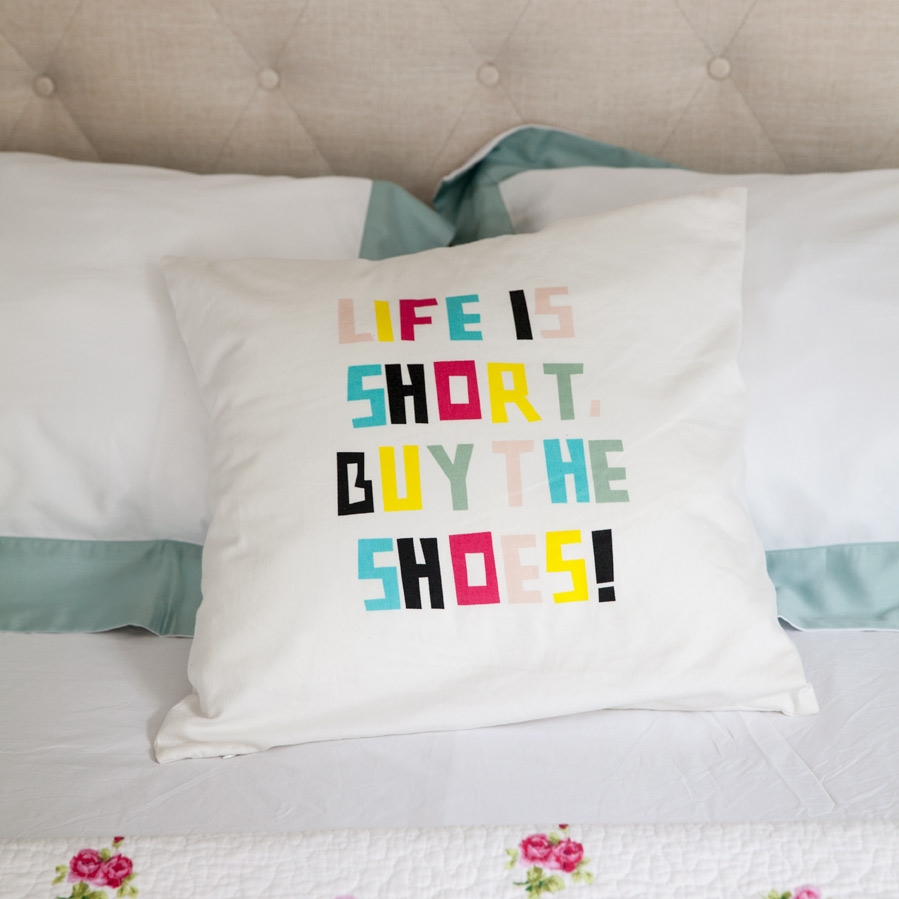 The slogan cushion on Webster’s bed

Webster’s first love was not fashion, but dance. With her older sister Claudia, she would travel up and down the country for freestyle disco competitions. “I wanted to stand out on the dance floor,” she says, “so we used to have sparkly costumes covered in diamanté. I think my penchant for crystals and embellishment probably comes from back then.” Her grandmother was another early influence: “I used to go to Nanny Peggy’s house after school most nights. She always wore glamorous outfits and would leave a trail of glitter everywhere she went.” 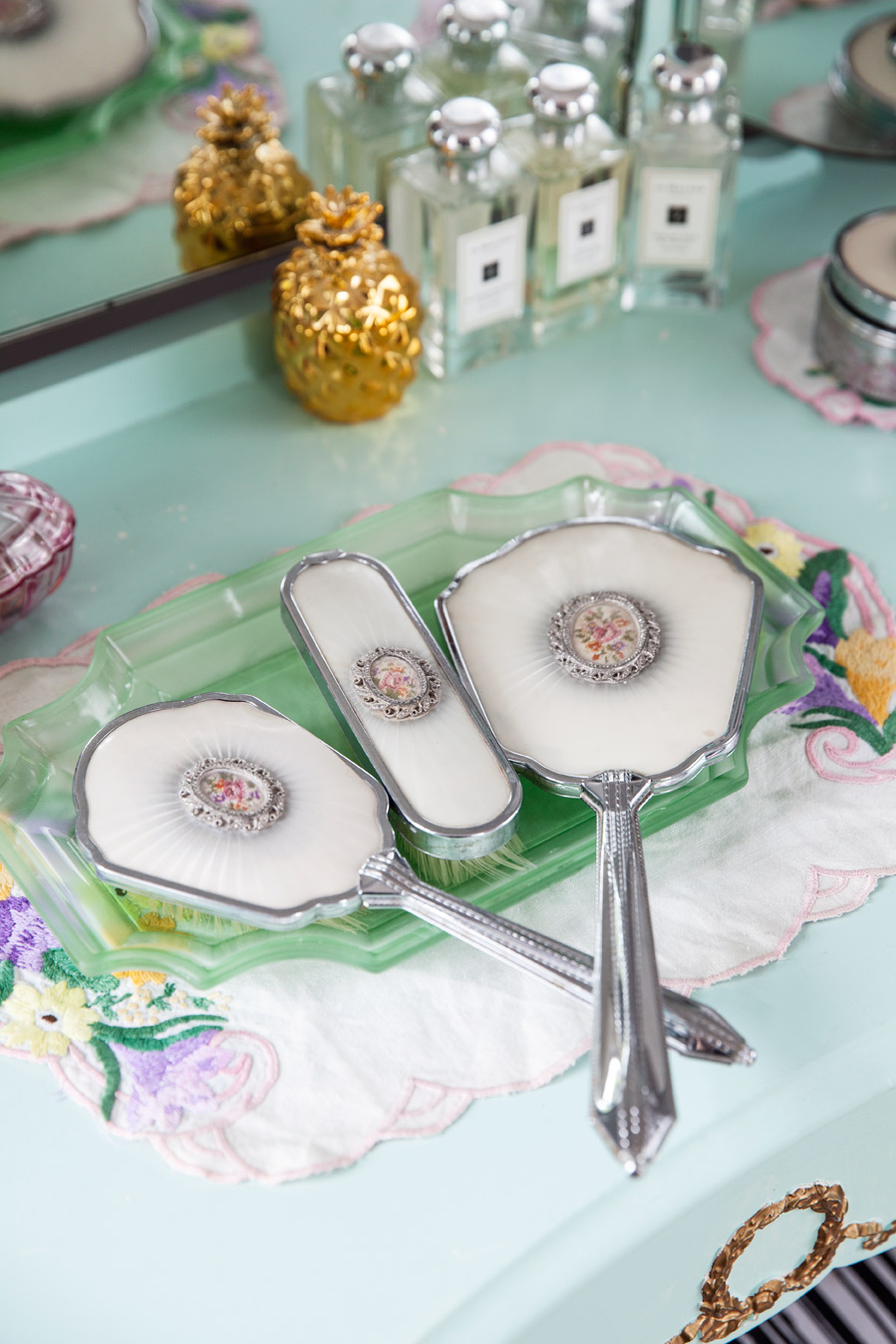 Her late grandmother’s vanity set on her dressing table

Webster then studied art and sculpture at the Camberwell College of Arts in London before one particular life drawing class sparked her passion for footwear. “The model brought in a big bag of clothes,” she says, “and it was then that I found myself really focused on sketching her shoes.” This led to a four-year degree course at the prestigious shoemaking college Cordwainers at London College of Fashion, followed by a masters in womenswear at the Royal College of Art. There, she met the designer Nicholas Kirkwood, whom she subsequently assisted for three years. “It was a long road,” she says. “Shoes are very technical—I could have become a surgeon in that time!” 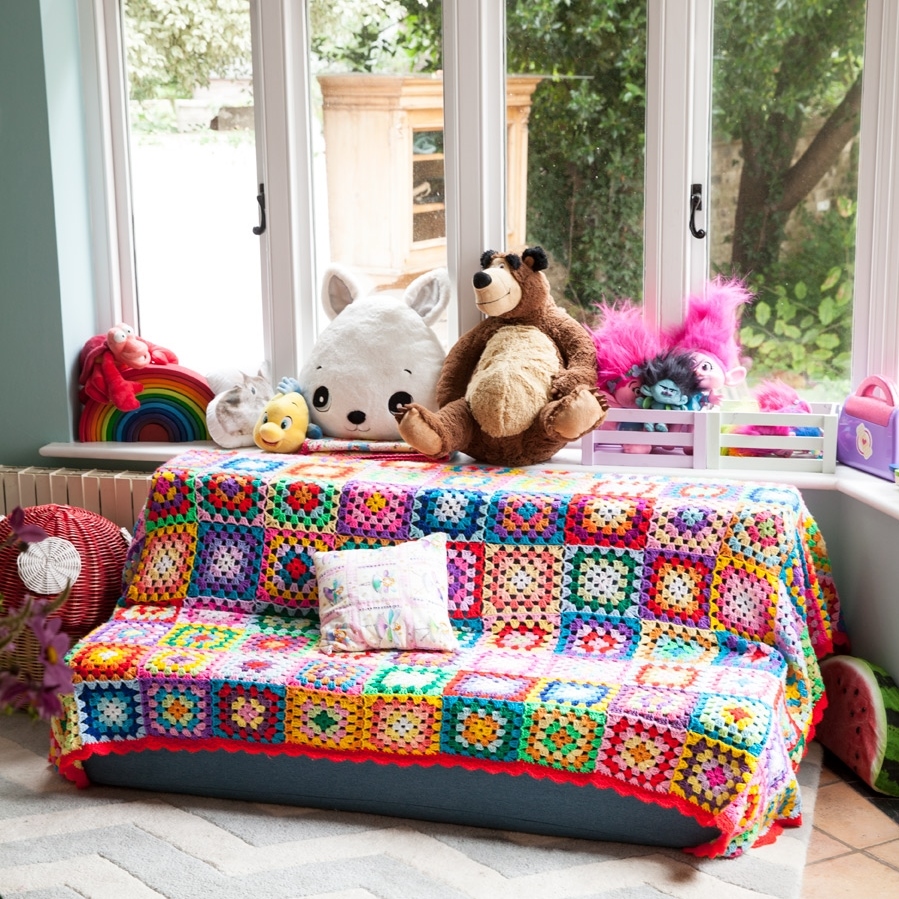 After founding her eponymous label in 2012, Webster travelled to Brazil to find out more about the manufacturing process for her designs. “That year, I went for the whole summer to get to know the suppliers and the tanneries,” she says. “I only speak a bit of Portuguese, but I did learn the most used phrase in the factory: “Ai Sophia! E muito complicada!” While the factory workers may have found her whimsical designs challenging to make, their efforts caught the eye of Browns founder Joan Burstein, who spotted Webster’s Chiara butterfly-appliqué sandals and decided to stock them; they flew out of the shop. “That was an incredible turning point for me,” Webster says. “It was unusual for an unknown designer to sell out like that, so we knew there was something magical about them.” 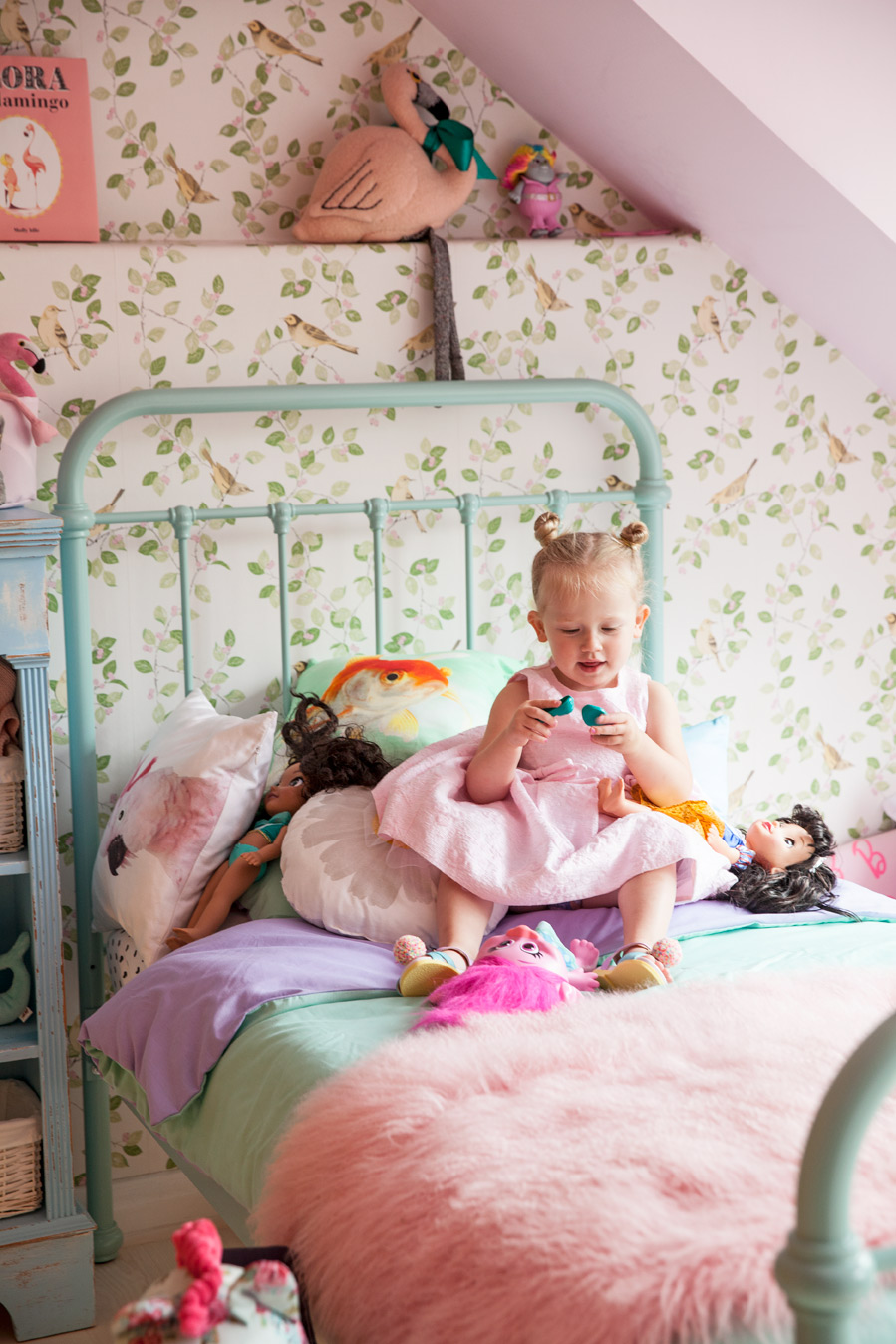 Bibi in her bedroom

After winning several coveted accolades including the British Fashion Award for Emerging Accessories Designer 2013, in 2016 Webster opened her flagship store on Mount Street in Mayfair, where her neighbours now include Christopher Kane, Roksanda, and Loewe. In part, she credits the savvy use of social media for her meteoric rise: “We noticed very early on that people would share photos of their shoes on Instagram, and we decided to dedicate a page to them on our website, showing how real women buy and style the shoes in different ways. It has been instrumental in the growth of the brand.” In five years, she has garnered a million Instagram followers and her shoes have been worn by Scarlett Johansson, Beyoncé, and Gwen Stefani. “I was so made up when Gwen wore them; when I was younger I was obsessed with her and that’s probably why I dress like a glamorous tomboy now.” 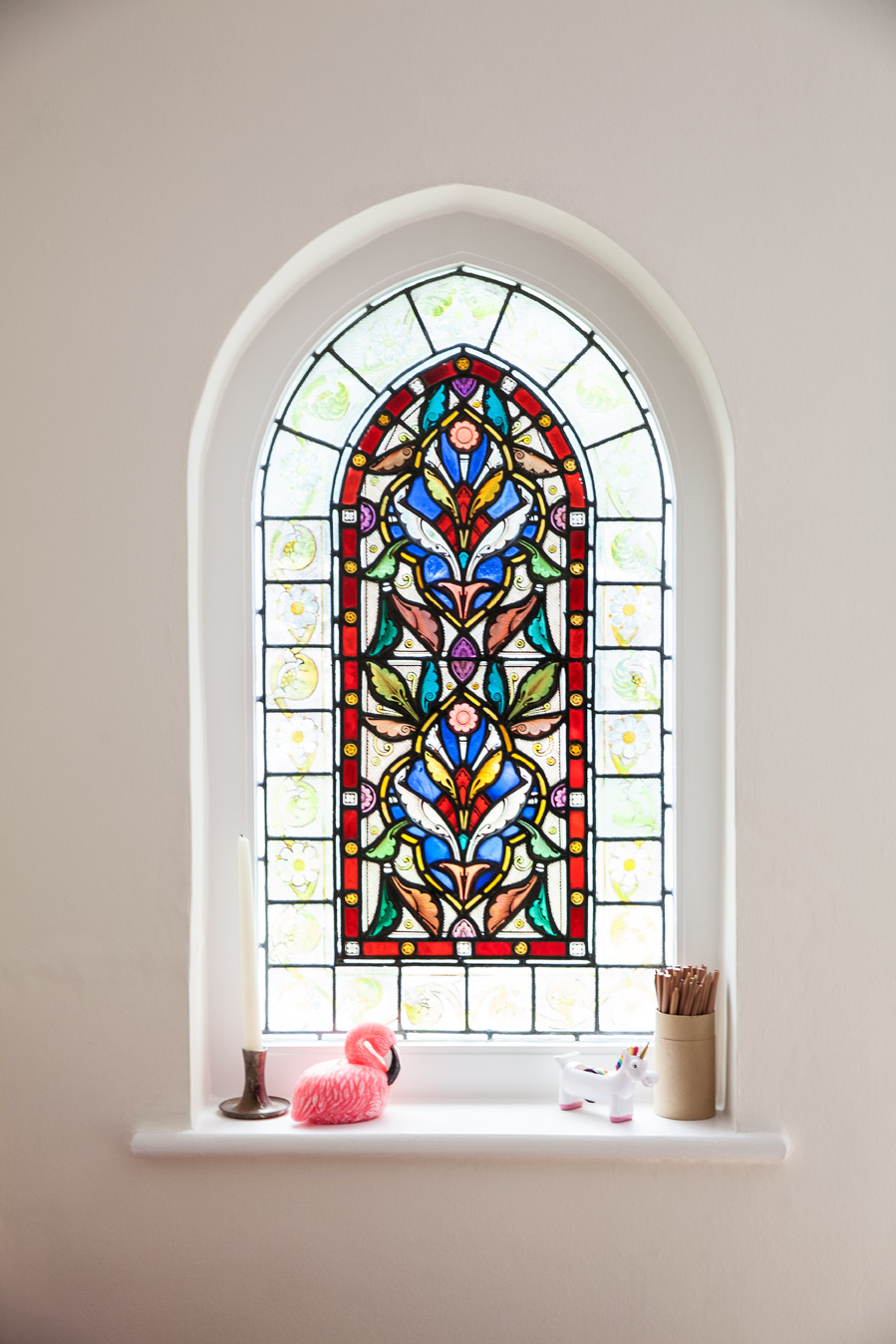 Day-to-day you’ll find her dressed casually in jeans, a sequined or slogan T-shirt from Markus Lupfer under a House of Holland jumper, and a pair of her own Riko trainers; by night she prefers vibrant print dresses from Mary Katrantzou. “I’m a bit of a chameleon,” she says. “I love bold colours and statement pieces but since becoming a mum, I’ve bought a lot more dungarees and denim, and I definitely wear more flat shoes.” 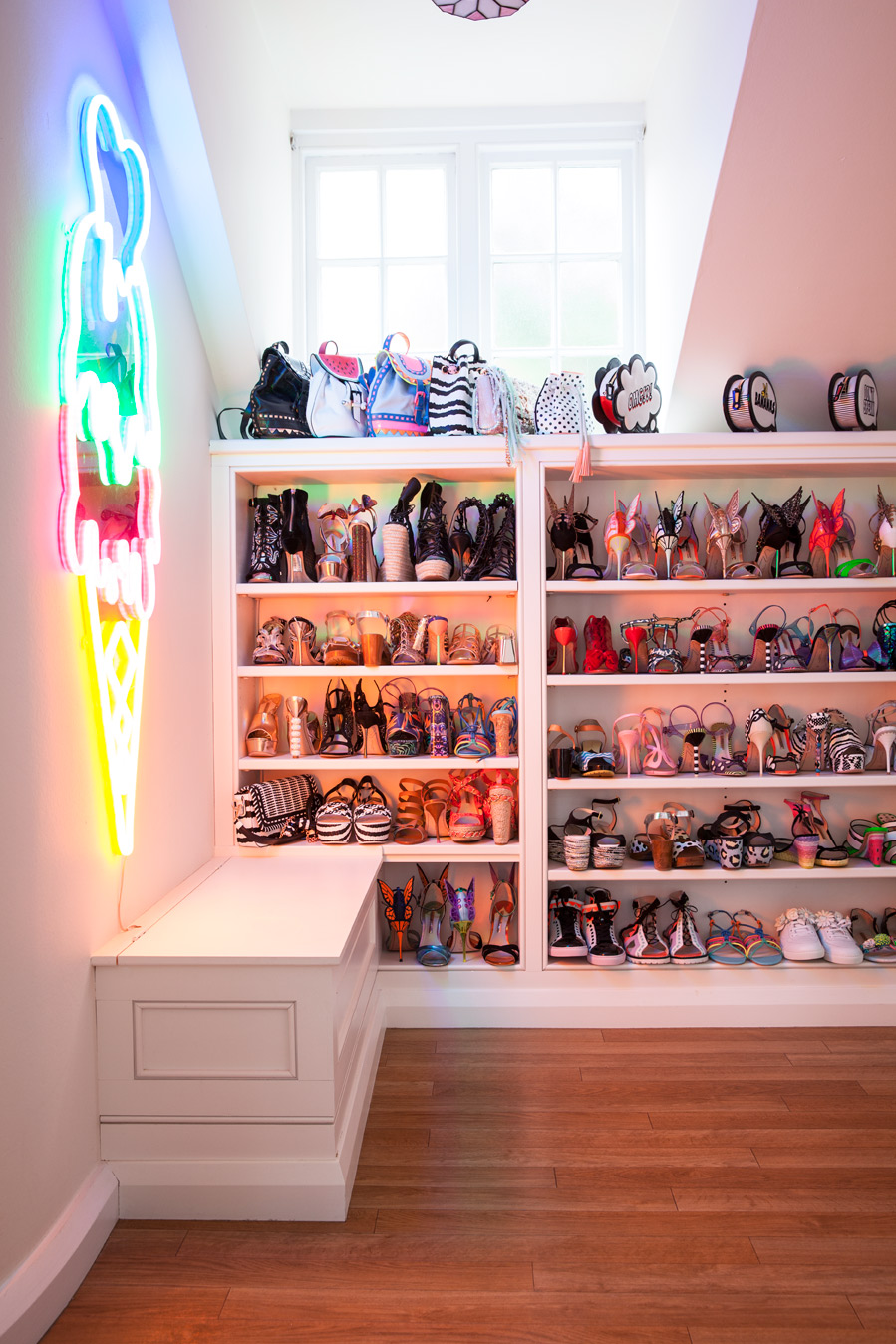 The designer’s collection of shoes and bags on the landing

A similar aesthetic is evident in her house, a converted church, where she lives with her husband Bobby Stockley, a former electrical engineer who has been involved in the business from the beginning and is now CEO. The interiors are part-Baroque, part-Barbie, with wood panelling, pastel coloured walls, and shearling rugs. While Webster says she doesn’t like buying brand-new furniture—“You’re more likely to find me getting into a bidding war for Art Deco lighting on eBay at four in the morning”—she has filled the house with pieces including prints from Hattie Stewart and the street artist Pure Evil. The upstairs corridor is dedicated to 200 pairs of shoes displayed neatly on shelves, and a neon sign in the shape of an ice cream by Electric Confetti from one of her maximalist London Fashion Week presentations. But it’s a handwritten sign on the blackboard in the playroom that is her all-time favourite piece. “Be like a pineapple: stand tall, wear a crown, be sweet on the inside.” For the Webster household, it’s the perfect motto to live by. 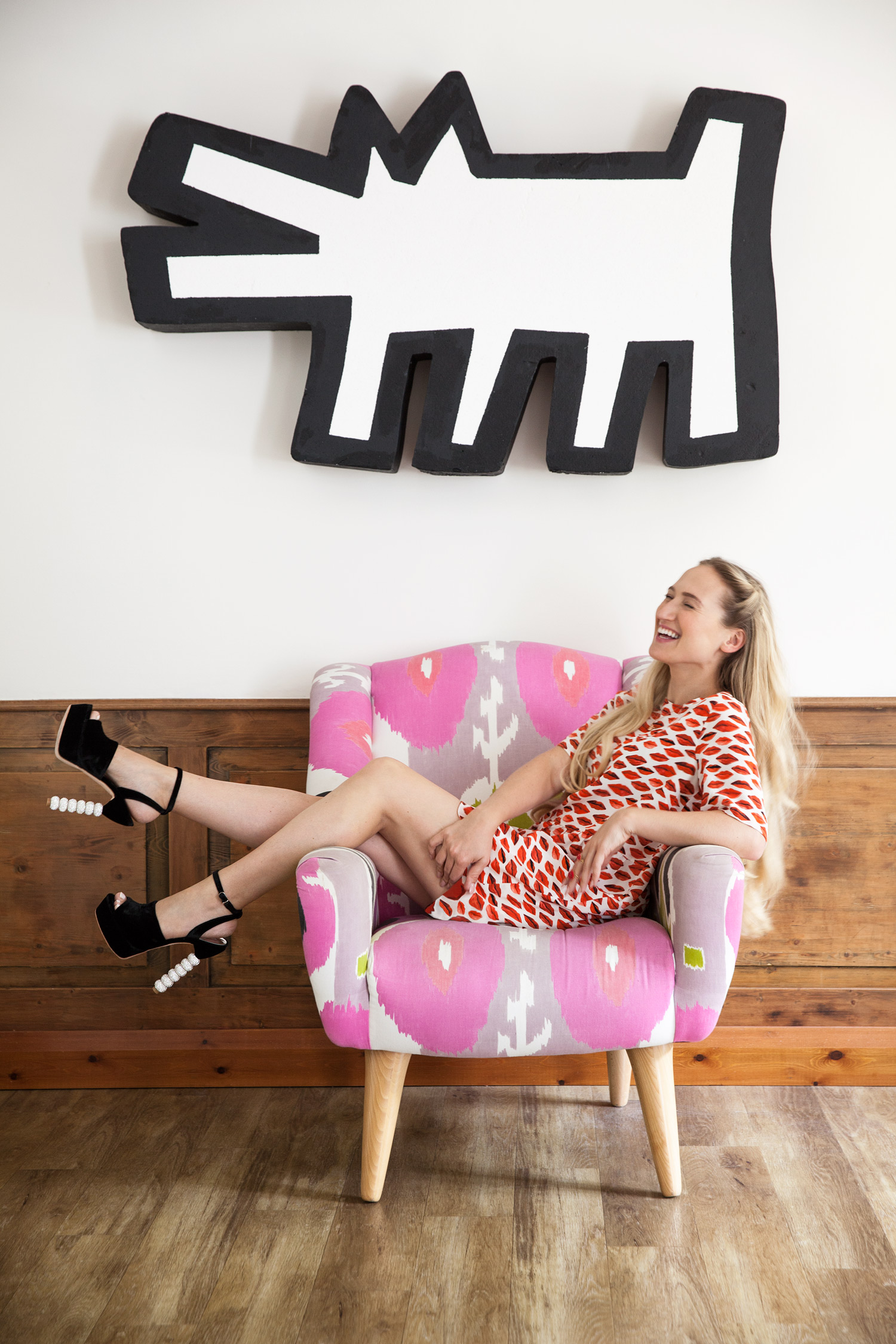