Amy Yasmine gets a lesson in history at The Bloomsbury, whose very own feminist past gets an unexpected bourgeoise makeover.

To say that London is a city full of surprises is an understatement. At every turn and corner, something unexpected awaits. It’s a happenstance that I’ve somewhat grown accustomed to, having spent nearly most of my formative years growing up in the city itself. Despite my thinking of having already discovered all London has to offer, I found myself rediscovering all which I thought I once knew, at The Bloomsbury Hotel. 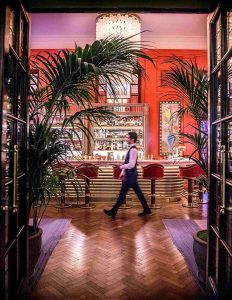 Tucked away in a quiet alley on Great Russell Street, The Bloomsbury is located in London’s literary heartland. It’s a prime address whose parameters were once dominated by the greatest writers in history—E.M. Forster, Lytton Strachey, John Maynard Keynes, and Virginia Woolf—all who were known collectively as the Bloomsbury Set. Indeed, it was this illustrious group of intellects that inspired the Grade II–listed building-turned-hotel. Step inside and you’ll soon discover 36 original masterpieces by illustrator Luke Edward Hall paying homage to literary icons, while restaurants and bars take on the period’s famed novels to new epicurean heights. 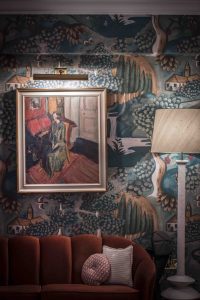 But for all its novel accouterments, it is the landmark building’s own storied heritage that sets itself apart from the rest. Unabashedly feministic, the hotel’s history kicked off in October 1923 when a former national general secretary of the Australian Young Women’s Christian Association was concerned to find that there were no provisions for club life in London. This apprehension eventually culminated in a fundraising campaign, propelled further by signs plastered across the city. Six years and many donations later, Her Majesty Queen Mary laid the first stone on 12th June 1929, and within two years, the building was complete. As the laying foundations of The Bloomsbury began to blossom, so did the emancipation of women.

By the mid-1990s, the upkeep of the YWCA was hard to maintain, and the Lutyens-designed building went up for sale. But leave it to Irish group Doyle Hotels to bring new life to the heritage landmark. Formerly known as Jurys Great Russell Street, the hotel did more to attract the corporate crowd than it did with the jet-set. Walking through the newly revamped hotel’s spruced-up corridors, I was immediately taken aback by its rich velvet interiors, cleverly juxtaposed against panoramic wallpapers and pops of red and turquoise. Opposite the reception nook, a fireplace crackled, as fabulous guests sat in an intimate discussion. 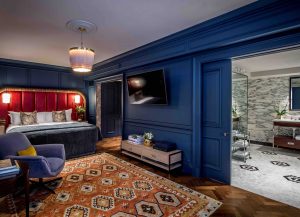 The luxury studio suite, in all its mid-century glory 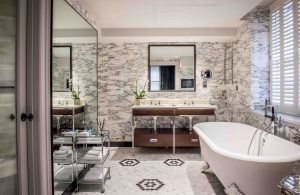 It certainly was a far cry from its former glory, punctuated even further by its polished eclecticism. Case in point, the Luxury Studio Suite, which with its Michaelis Boyd upholstery and Colefax wallpaper, seemed to have popped out of a nouveau Wes Anderson film. Space was most certainly not an issue here, as the entire room was able to fit a generous study, a snug kitchenette, a plush seating area, and perhaps its pièce de résistance, an expansive marble bathroom with free-standing clawfoot tub.

Nothing says “Gin O’Clock” more than the hotel’s Coral Room bar. Here, is where the hotel’s magic is brought to life. Designed with the bougie scholar in mind by Martin Brudnizki, five chandeliers crafted from Venetian Murano glass balls screamed opulence to the nth degree while sunset-pink walls were made for a highly instagrammable setting. 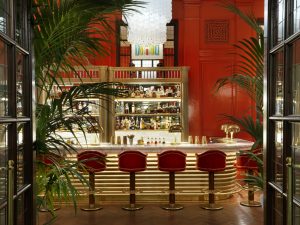 After an indulgent start to the evening, I decided to retreat myself to the hotel’s al fresco Dalloway Terrace, decked with French bistro chairs and candle-lit tables along with rich faux fur throws and climbing flowers. As for a feast, its vast selection of British favourites were all excellently done up, like crispy fish and chips or traditional rabbit stew. Vegetarians would do well to consider its mushroom risotto with just the right amount of creaminess. 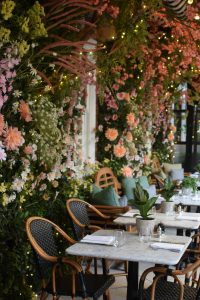 About a few courses in and half a bottle of wine through, it wouldn’t be wrong to imagine yourself mingling with the original Bloomsbury Set. A novel yet a fitting idea, because at The Bloomsbury, “suite” dreams really do come true.