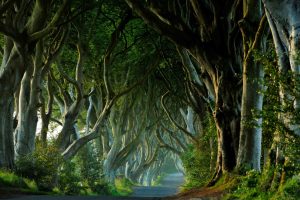 This eerie avenue of beech trees is a completely natural phenomenon made up of 150 trees in opposing rows, which were grown during the 18th century as an impressive entrance for visitors to a Georgian mansion. As the trees matured, they intermingled and formed this atmospheric tunnel.

Playing the Kingsroad in Game of Thrones, this amazing sight is best viewed during a stay at the glorious, five-star Galgorm Resort & Spa on a spa break, just half an hour away from Dark Hedges. Visit spabreaks.com