Travel /
City Guides
Empty expanses of desert, rugged stretches of mountains, golden beaches: the Sultanate of Oman is having a moment. By Caroline... 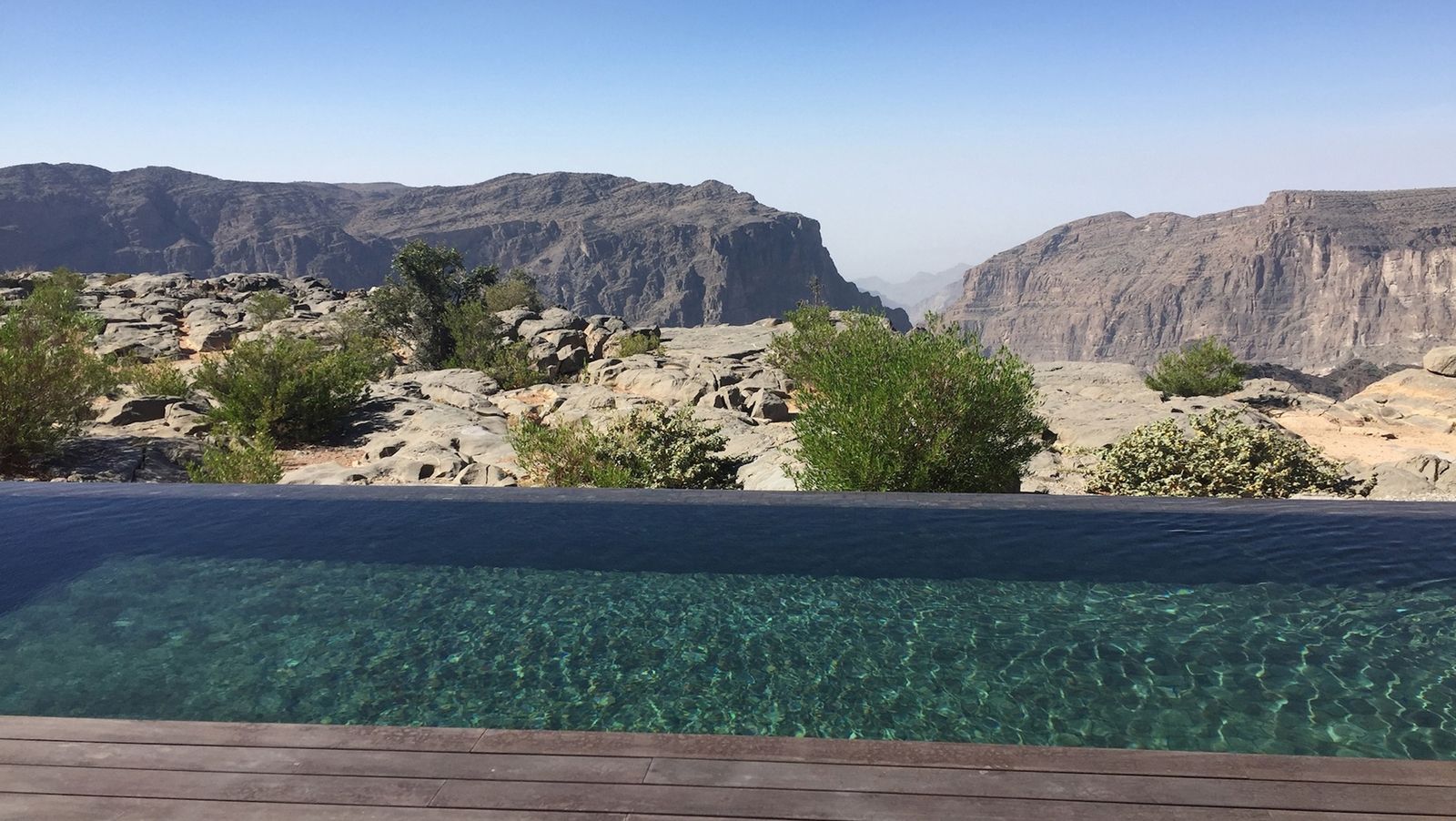 It’s almost dusk in the Empty Quarter and the sun is setting fast. A jeep carrying four Bedouin has already come to our assistance and we can see the headlights of another winding through the desert tracks in the distance. Such is the sheer volume of sand in this golden expanse – which spans 250,000 square miles and accounts for vast swathes of Oman, Saudi Arabia, Yemen and the UAE – that even four-wheel drives are at its mercy and we’ve been stuck for over an hour. Luckily the 43-degree heat has subsided and the stars are starting to come out, replacing the scorching sun as the sky turns a milky pink.

It takes six men – whose starched white dishdashas are now a dusty orange – several tow ropes, a rug (don’t ask) and some serious horsepower, but we’re soon on our way back to Salalah, Oman’s southern city and the home of Anantara Al Baleed Resort. Our ‘guru’, Hussein, assures us he will keep a spade in his boot from now on and bids us goodnight. After a quick, refreshing dip (mostly to remove the remnant sand) in our villa’s plunge pool, we sit out under the stars at Al Mina, eating mixed grills to the sounds of the live entertainment. 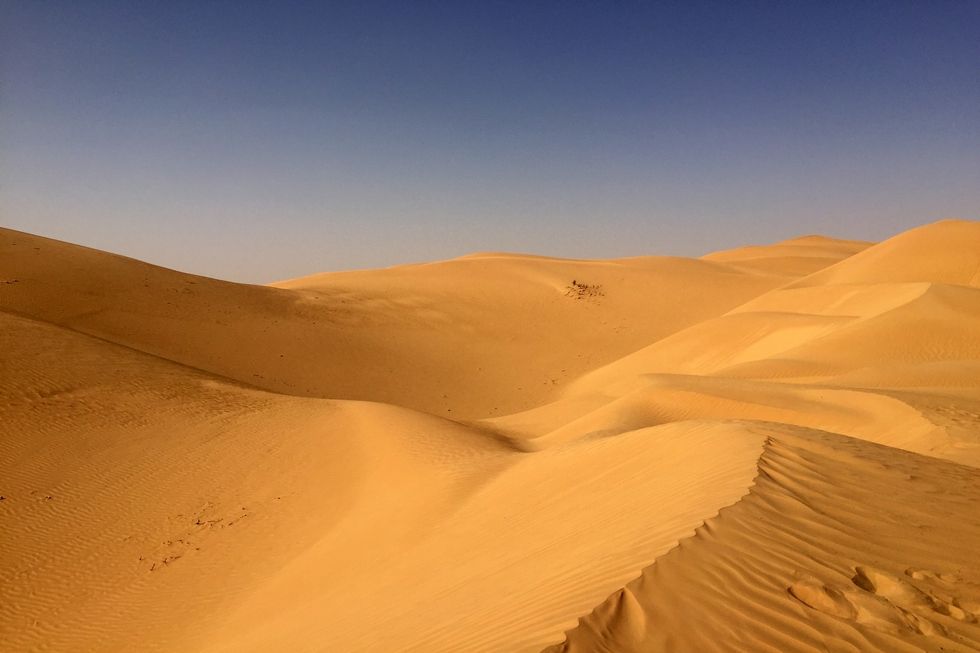 This new resort is a gleaming, maze-like expanse of palm-trees and white buildings, many of which are standalone villas, with their own garden, sitting-room and bedroom, and some of which open straight out onto the beach. On arrival, our feet had been massaged and washed as part of the welcome briefing; an insight into what is on offer at the mosaic-lined spa, where treatments include a frankincense ritual in homage to the area’s famous commodity – the heady tree resin has been harvested and traded here for centuries.

Between June and September, this part of southern Oman is inundated with visitors, mostly desert dwellers from the Arabian Peninsula desperate to witness rainfall. If you prefer showers to sunshine, this is the time to come – especially as all that moisture turns the landscape a vivid, glorious green.

A short flight north to the capital, Muscat, and an onwards transfer by road to the Jabal Akhdar (Green Mountain) in the Al Hajar range takes us to another Anantara outpost. On the Saiq Plateau and 2,000 metres above sea level, this hotel can lay claim to being the highest five-star retreat in the entire Middle East. The area is impressive from the moment you start the ascent onto the limestone massif, up steep, quiet roads, past herds of goats, until you reach the entrance to this fort-like property. But things get really extraordinary at check-in, especially if you’ve booked a Cliff Pool Villa and get the chance to glimpse the view out across the canyon past your deck and private pool.

Diana’s Point – a terrace that hovers over the edge of the cliff, so called for the namesake princess who visited the area with Prince Charles in the 1980s – is the perfect place for sunrise yoga and sunset snaps. With a little help from the concierge, it can also be sequestered from other guests for romantic dinners à deux. 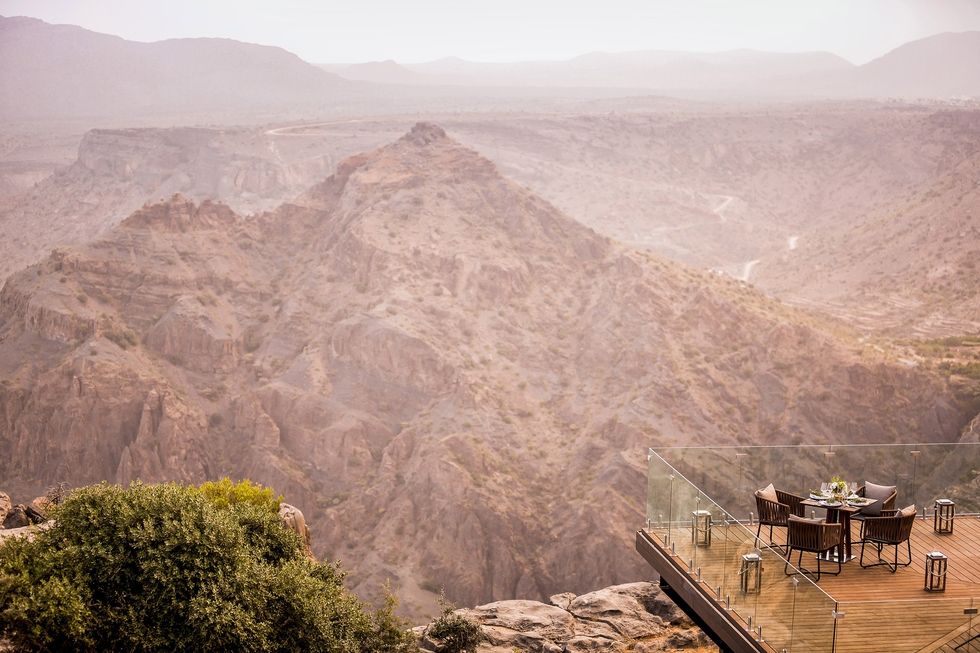 The next day, I find myself in a helmet and harness, leaning back into the deep gorge for a photo opp, thanks to gentle coercion by my guide Mahir, who is skilled at getting the money shot from terrified guests. I later manage to abseil down a cliff face, but discover that getting back up isn’t quite so easy. I’m grateful for the via ferrata (steel cable) that enables my safe, less energy-expending return to the resort.

Mahir grew up in one of the villages across the valley; though many Omanis are now heading to the towns and cities to find work, it was a privilege to accompany him on a walk later that day to the nearby hamlets to see both the ancient falaj irrigation system and his childhood home, where his family lived among the goats who are now the most populous of the remaining residents.

Back at the hotel, dinner options include fine-dining Middle Eastern fare at Al Qalaa, Bella Vista, a surprisingly authentic Italian restaurant, and eating under the canopy of stars on the terrace of Al Maisan.

After a brief pit-stop enjoying the pools and palm-trees of the Chedi Muscat, it’s time for the seven-hour flight back to London, a perfectly manageable distance and a small trip to endure for guaranteed winter sunshine. Oman offers a different side to Arabia, away from the glossy, seven-star hotels of Dubai, and the unadulterated excess of the other Gulf states. It was recently named the fourth-safest country in the world; its people are kind, warm and gentle; the Sultan is revered, not just for being royal, but because he looks out for his people, giving every citizen land on which to build a house should they want to. This year, everyone wants to go to Oman – and it’s not difficult to see why.

Original Travel arranges bespoke itineraries to Oman, including stays at the Chedi in Muscat and the Anantara properties in Salalah and Jabal Akhdar (020 3582 4990).