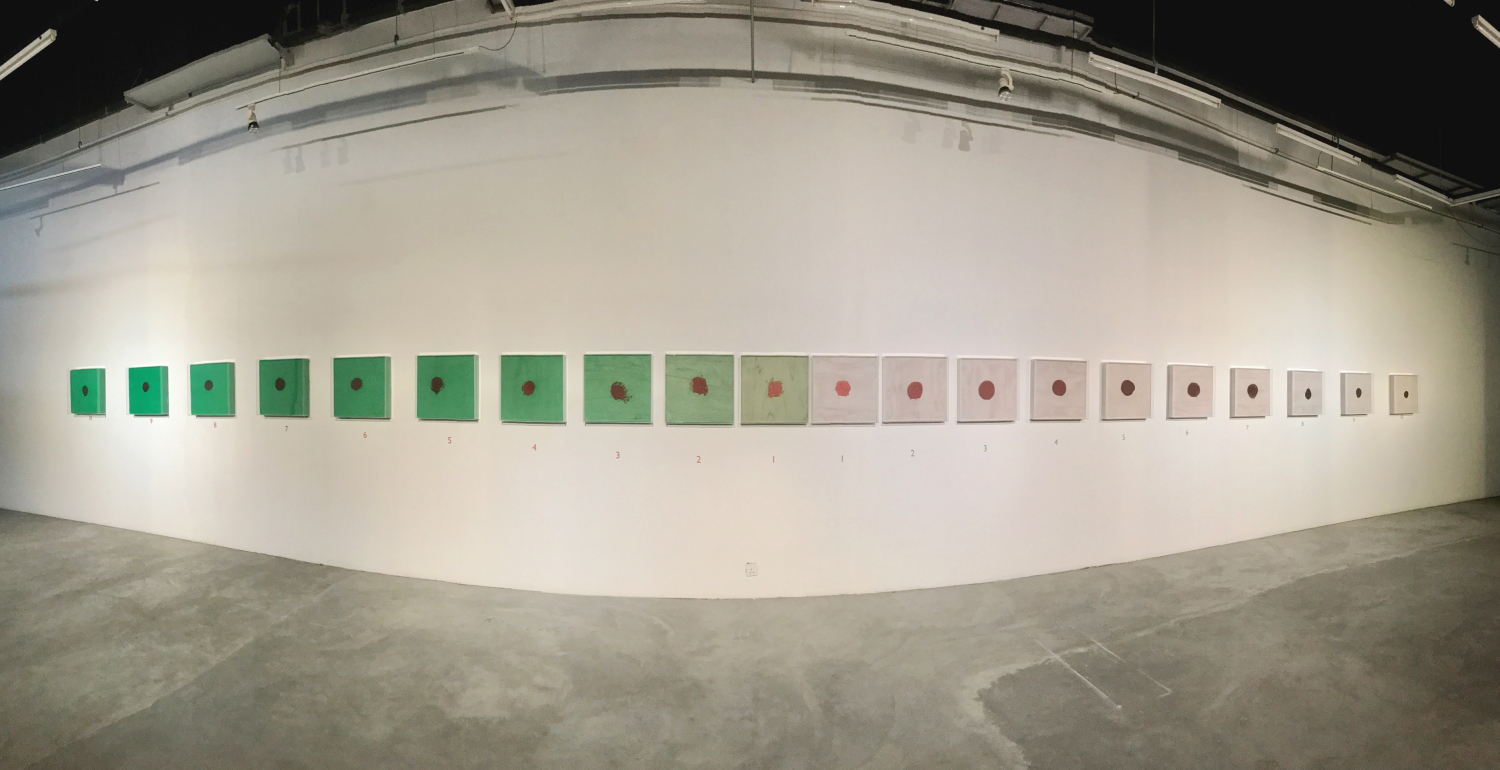 Culture /
Art & About
An essay on the interpretation of Ivan Lam’s latest work that was exhibited at Wei Ling Gallery.
by Line Dalile

In 1989, post-modern artist Barbra Kruger famously proclaimed, “Your Body is a Battleground” on an art poster designed for the pro-choice march on Washington. The analogy between female bodies and battlefields has been a recurrent theme throughout history, one that female artists and writers have returned to navigate again and again through their creative work. The female body, impregnable by social, cultural and historical factors, is considered a capacious topic, specifically because women bodies do not stand in an external relation to power, but are inscribed, shaped, acted upon and regulated by religious and political institutions. To understand the power relations that have colonized the female body, one need to look no further than Hélène Cixous’s seminal essay “The Laugh of the Medusa”, in which she spoke of the body as an entity confiscated from women and turned into an “uncanny stranger on display”.

In a similar vein, Margret Atwood did not shy away from slicing her fictional female bodies wide open, unabashedly showing the reader how power structures are written onto the female flesh. In the Handmaid’s Tale, Atwood navigated colonized bodies – specifically female bodies – which were depicted as contested sites of power that have already been marked, inscribed and engraved by social pressures. In the dystopian novel, a woman’s anatomy dictated her destiny. If not state owned “two-legged wombs”, as referred to by Atwood, then the female body is drafted as another socio-cultural document, left to navigate territorial disputes between being virginal (pure) or sexual (tainted). Treading the fine line between these territories, women bodies, as echoed by Elizabeth Grosz are neither neutral nor universal. They are not “ahistorical, precultural, or presocial”, but always linked in one way or another to a system of power and representation. Writing about the female body then, or positioning it as a subject of artistic inquiry, is an inescapably critical act that speaks of the wider cultural and political forces that produce the female body and dictate our perception of it. And while the desires, pains and pleasures of the body differ in articulation depending on the culture, the narrative engraved in the female body is of universal resonance.

One artist, interestingly, a male artist, has set to explore this narrative, and through artistic inquiry, offered an poignant commentary on the sexual politics attached to specific parts of the female body, specifically the hymen. In his latest performance work, The Hymen Project, Malaysian artist Ivan Lam delves into a new territory, one that has predominantly been explored by feminist scholars, writers and artists. Yet, Lam approaches this territory with precision and care. As a male artist, he is careful not to take up too much space, or in modern terms, not to “mansplain.” Lam’s presence, as well as his artistic touch, and to some extent his voice, are all absent from the actual performance. Even his artistic vocabulary has been reduced to show and communicate only what is necessary, and his choice of materials was limited to the use of only what is essential. What is left to hang on the walls of the gallery is the outcome, the trace that remained after an ephemeral performance. 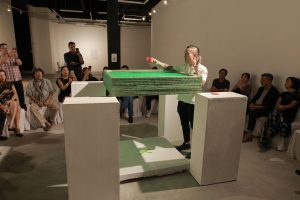 Women bodies, too, leave traces. They are ever-changing sites onto which narratives are marked by blood. From the onset of menses, loss of virginity, childbirth, and finally menopause, blood appears and disappears to signal different stages of womanhood. The centrality of blood as a symbol of a woman’s life cycle is a vital element in Lam’s work. The red paint used is suggestive of blood, which Lam uses to simulate female bleeding.

In the Hymen performance, the thick texture of the red paint slowly drips through the green netting onto a numbered diaper cloth. This performative process is repeated again and again, with the artist gradually altering the height between the green net and the diaper cloth. The green netting, too, gets denser as new layers of green nets are added onto previous ones. Finally, a difference in the value of the red paint can also be spotted. Whereas originally the value was pure red, the final work that is comprised of ten layers, sees the red evolve into 90% black red. The performance culminates in 10 pairs of image carriers (green nets and their corresponding white diaper cloth) that are marked by one motif, a single red dot. What is visually arresting about the Hymen Project is the process is repeated and the motif is the same across the twenty pieces on display, yet each piece speaks of a different stage in the journey of womanhood and conjures up a different memory. The elements and their symbolism are captivating enough to behold the viewer’s gaze and, for the female audience, looking at the body of work is an act of remembrance. In fact, it is in the value of the red paint that one sees the progression from being seen as “innocent” to being viewed as a sexual being. Set against the white cloth, the presence of “blood” refers to a multitude of memories, either that of white pads associated with menstruation or white bed sheets associated with defloration. In imposing a set of limits upon his artistic language and choice of materials, Lam was able to portray the passage from girl to woman in a manner that is unambiguous, demanding meditation, not explanation, from the viewer.

Minimal in presentation, yet heavy with symbolism, the nature of the female blood exists within a paradox. While menstrual blood carries with it the stigma of that which is abject and unclean, virginal blood signals purity. Regardless of the context, female blood provokes and shocks. Its uncontrollable and chaotic nature, a blatant reminder of women’s procreative power, threatens the patriarchal aspirations to control and assume ownership over female bodies. In an effort to contain what cannot be contained, laws of purity and pollution have marked women bodies by “codes” that serve to control their autonomy both physically and metaphorically. Where there is a flow of blood, there is life, and when women are too close to the divine life force, their bodies become marked as taboo. Whether it is the shame associated with menstruation, which under patriarchal monotheism was perceived as a “curse” and a punishment for Eve’s primal disobedience, or the sanctification of virginity as seen by the institution of patriarchal marriage, the female body is reduced to less than the sum of its parts and made manageable under male control.

In Lam’s latest work, the focus is on the sexual politics attached to one part of the female body, the hymen. The hymen occupies a liminal space, standing in between the inside and outside of a woman, and at once sewing confusions between opposites. The “little curtain of flesh”, an embodiment of the moral virtue of chastity, signals the melding of two disparate ideas: open/close, presence/absence, virginity/consummation, and finally as Jacques Derrida theorized in “The Double Session” in Dissemination, the “jewel box of virginity” also stands in- between “desire and fulfilment”.

At once tainted with vice, yet sacred, the hymen is a metaphor for the undecidable and the in-between. The paradoxical logic of the hymen is symbolized in Lam’s choice of materials. The green net, used as a metaphor for the hymen, is the same material used in construction sites, its original purpose being to protect and guard against the rubble from the building site. Yet, despite its protective qualities, and regardless of how dense it is, the paint dripped on to it always seeps through and finds its way onto the white diaper cloth. The hymen that the culture has imposed on the female body also carries within it the sentiment of protection. The hymen, is there so it must be “safeguarded” and because it is “safeguarded” then it must be “there”. 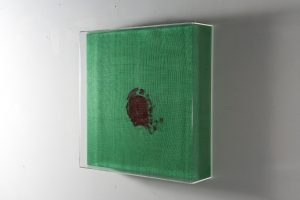 This phantom membrane – now you see it, now you don’t – posses an anxious and uncertain existence, yet it still thought of as a shield guarding the interior of a women’s body. In thinking of it as an obstruction, the hymen becomes a monumental pendant, simultaneously associated with shame and honour, and an instrument of control designed to regulate female sexuality. What Lam’s performance piece highlights is that the existence of the hymen is not so much rooted in the scientific and the medical field as it is entrenched in the social, cultural and religious fabric that has caged the female body and imbued it with a set of codes. In an effort to protect, the protected loses agency and becomes a property. Likewise, the female body that is embroidered with cultural codings, is on a quest to reclaim agency, and perhaps in a constant search to write its own narrative. As Lam’s construction nets show, the veil of protection that we have constructed around our daughters is fragile. More often than not, the veil turns their womanhood invisible, and rather than protect, it distorts their perception of their own bodies.

“Where does woman belong?” and “What belongs to woman?” asks Derrida in “Double Session” In the Hymen Project, Lam attempts to answer. The rustle between attachment and detachment, between the want to protect and the need to let go permeates throughout the performance. Lam has set up the protective net, he has poured the paint. Now, he lets go. In relinquishing control, the artist becomes a distant observer of his art. Perhaps this Lam’s unique answer to Derrida’s question lies in stepping aside and listening to the wisdom in the answers of the girls, women, daughters, and mothers of the world.

Fashion News
Start the new decade with a fresh perspective – from augmented-reality couture, to the lab-grown gems.