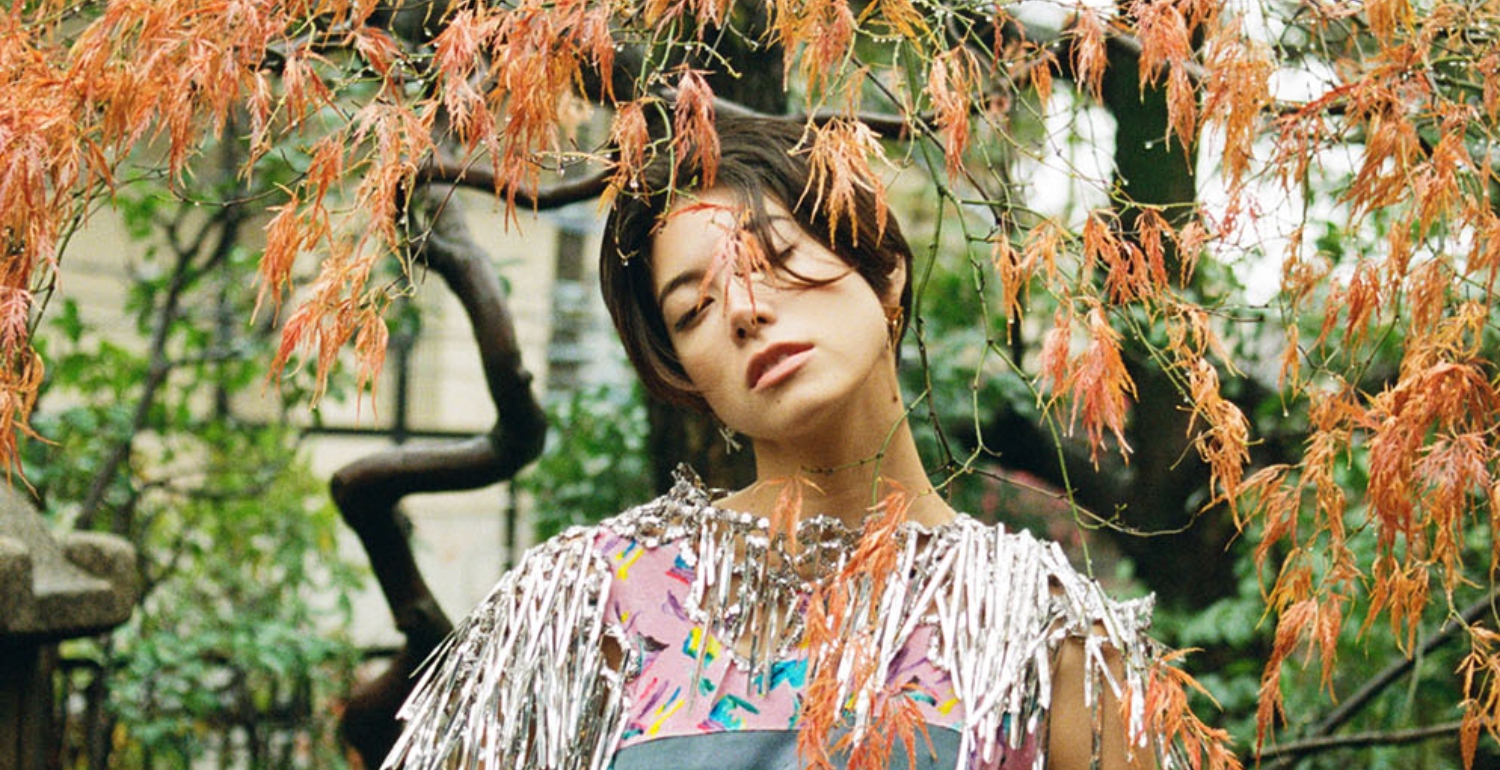 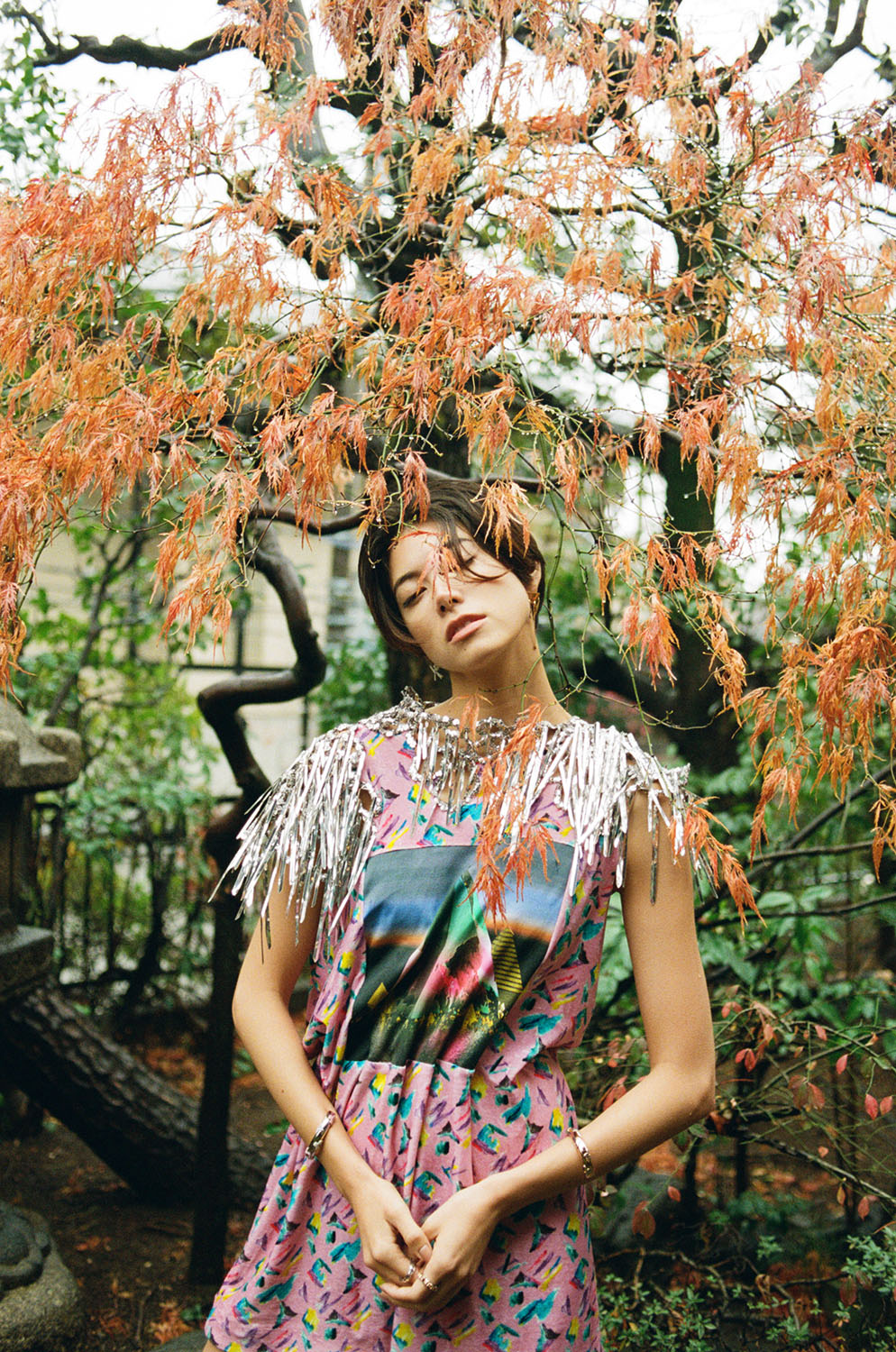 Dress; earrings; bracelets; and rings, all from Louis Vuitton

“Don’t touch my moustache!” Hikari Mori exclaimed, as I was getting her dressed in an origami-esque ’80s cocktail dress by Louis Vuitton for Harper’s BAZAAR Malaysia’s February 2019 cover story. But before you jump to any conclusions, no, the Japanese supermodel doesn’t have a moustache—nor was I touching one. She was merely teaching me how to say “you’re welcome” phonetically in her native Japanese. “It’s actually pronounced dō itashimashite, but if you say it fast enough to an English speaker, it sounds like you’re telling someone not to touch your moustache!” Laughter ensued, and needless to say, I’ve been using that phrase ever since.

Such is the 26-year-old’s infectious charm; her sunny disposition was also a welcome contrast to the sobering downpour that unexpectedly enshrouded Tokyo. Fun fact: there was a strange bout of an Indian summer the week before our shoot, with the Japanese capital reaching highs of 28°C despite it being early in December. So when the temperatures dropped, who better than Hikari to liven up the room? Dressed in an effortless mix of A Bathing Ape fur bomber jacket, slogan Missoni tee, and billowing palazzo trousers, the statuesque beauty was reminiscent of a young Tina Chow, the ’80s pixie-haired socialite whose irreverent spirit made her a muse to designers such as Yves Saint Laurent and Giorgio Armani. Hikari was all smiles as she entered our Japanese tea house studio, in the heart of Tokyo’s Minato district. “Konnichiwa!” she chirped, bowing respectfully to the crew. I followed suit, because not only was it customary, but I was also bowing to fashion royalty. 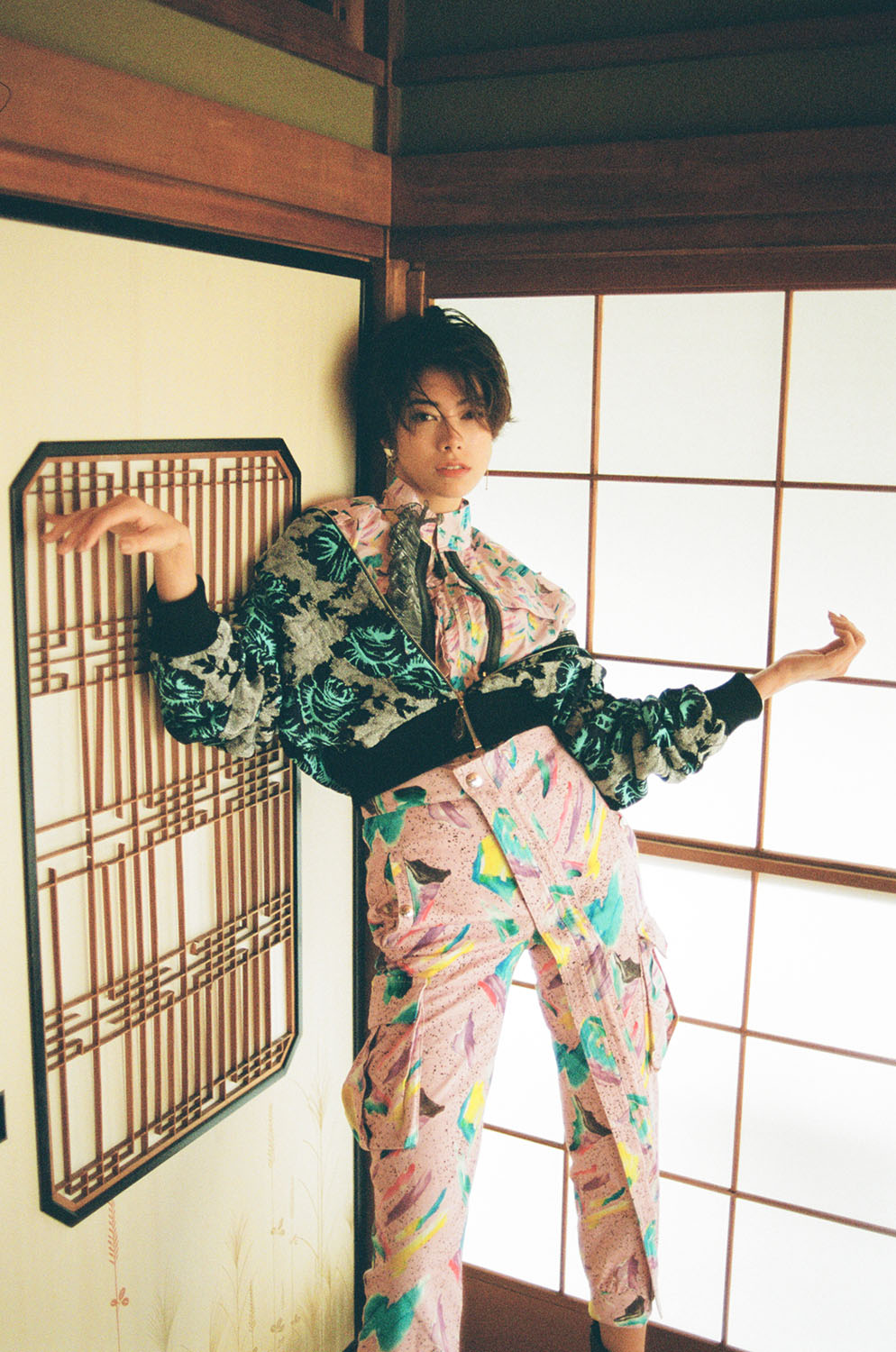 Bomber; jacket (worn inside): trousers; and earrings, all from Louis Vuitton

In case her last name isn’t enough of a hint, Hikari is the granddaughter of famed Japanese couturier Hanae Mori, the first Asian woman to be inducted into the Chambre Syndicale de la Haute Couture. Known for her signature butterfly prints, Hanae dressed influential women such as Nancy Reagan, Imelda Marcos, and Princess Grace of Monaco, and was awarded the Order of Légion d’Honneur by former French president François Mitterand in 1989. Evidently, fashion runs deep in Hikari’s veins. In 2018, Hikari was the first Japanese native to attend the prestigious Met Gala, and is currently a front-row regular at fashion weeks, on top of her red-carpet appearance at the 75th Venice Film Festival. “She taught me a lot about elegance,” Hikari noted, as we went into detail about her grandmother’s legacy. “I remember her getting mad at me, if ever I would bare too much skin, or dress a little tomboyish!” she recalled. Still, a quick scroll through her Instagram feed—@hikari, 1.3 million followers and counting—would suggest a certain sense of duality, one that sees her frolicking on an Arabian desert in gilded flared trousers and a fringed crop top, and posing with Kate Moss in a zebra-print kimono.

“I have two sides to me. I can be both energetic and powerful, but also shy and reserved, which most Japanese women can relate,” she confessed, crediting her multifaceted personality to her mixed heritage. Born to an American mother Pamela and Japanese father Akira, Hikari’s world consists of two contrasting cultures, though she admits one certainly outweighs the other. “I feel like I’m the most Japanese in my family,” Hikari confided. “I stayed in Japan when my siblings went to school in the United States. I attended a Japanese school, so my siblings always tell me that at times, I tend to be obedient.” According to her, “blending in” was favoured over “standing out” and so, as a child, the fashion maverick always tried to fit in. “I was afraid to wear clothing that was too different to what others were wearing, but that side of me is gone now. Being in this industry, I’ve been able to experiment with my style, meet and work with so many different characters, and learn that there isn’t a ‘right’ way to wear certain clothes.” 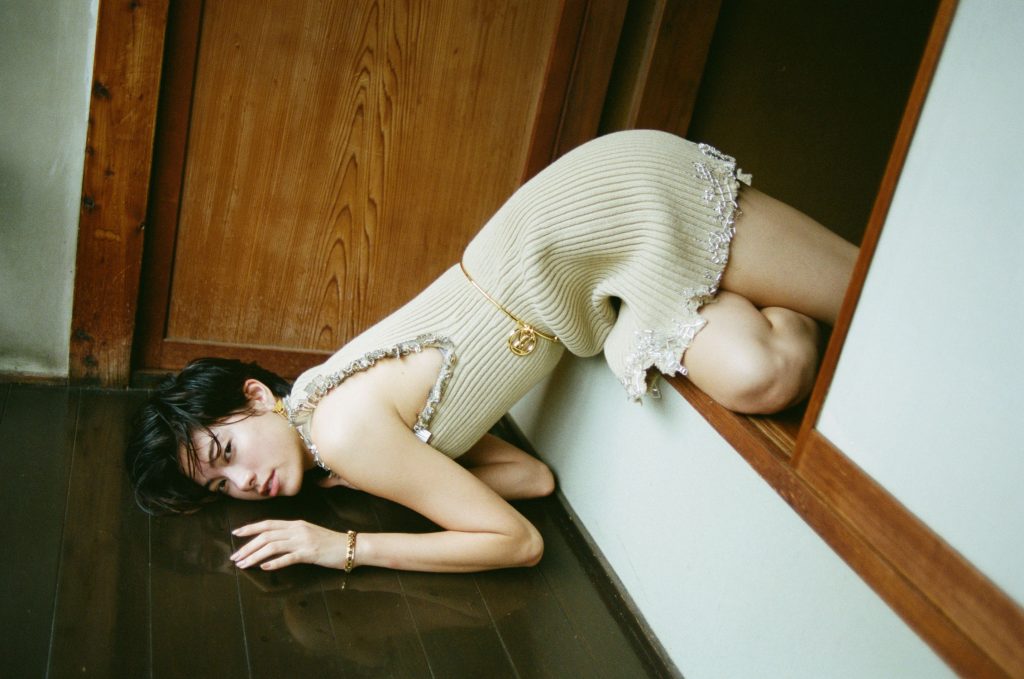 Dress; belt; earrings; and bracelet, all from Louis Vuitton

Perhaps that’s the reason why she’s been thrust into the spotlight. A natural shapeshifter, Hikari understood from the beginning that in order to make it in the industry, she needed to set a goal—one that doesn’t stem from material wants, but rather, one of substance that would forward her career. “I started to take on a healthier lifestyle,” she revealed, elaborating how ambitions had to start from within. “And so I started to eat better, get fitter, and eventually my mind and soul got to a good place.” In other words, today, she is at peace with her inner self; a level of zen reflected through a headstand she demonstrated to the crew before the shoot commenced. This is what truly sets her apart from her peers, especially in today’s digital age. “These days, everything is so fast-paced, and you just have to love the things you already have,” she explained, noting that it’s not always about winning the race, but finding beauty in absolute stillness. “Things that don’t just come and go—treat them like they’ve been inherited, and with value.” She goes on to use the Louis Vuitton Spring/Summer ’19 pieces that we’re shooting her in, as an example. “Growing up with my grandmother, I learned how to appreciate the beauty in longevity. Just look at all the dresses we shot today; the details and intricacy of each piece are just so fun to see,” the model elaborated. Like a cocktail dress pleated to the extremes, fanning out like a crane spreading its wings, or a knitted dress with frosted crystals at its hems, crafted in such a way that it looked like it had been plucked out from the Ice Age. “It’s things like these that never get old,” she said, with a glint in her eye. 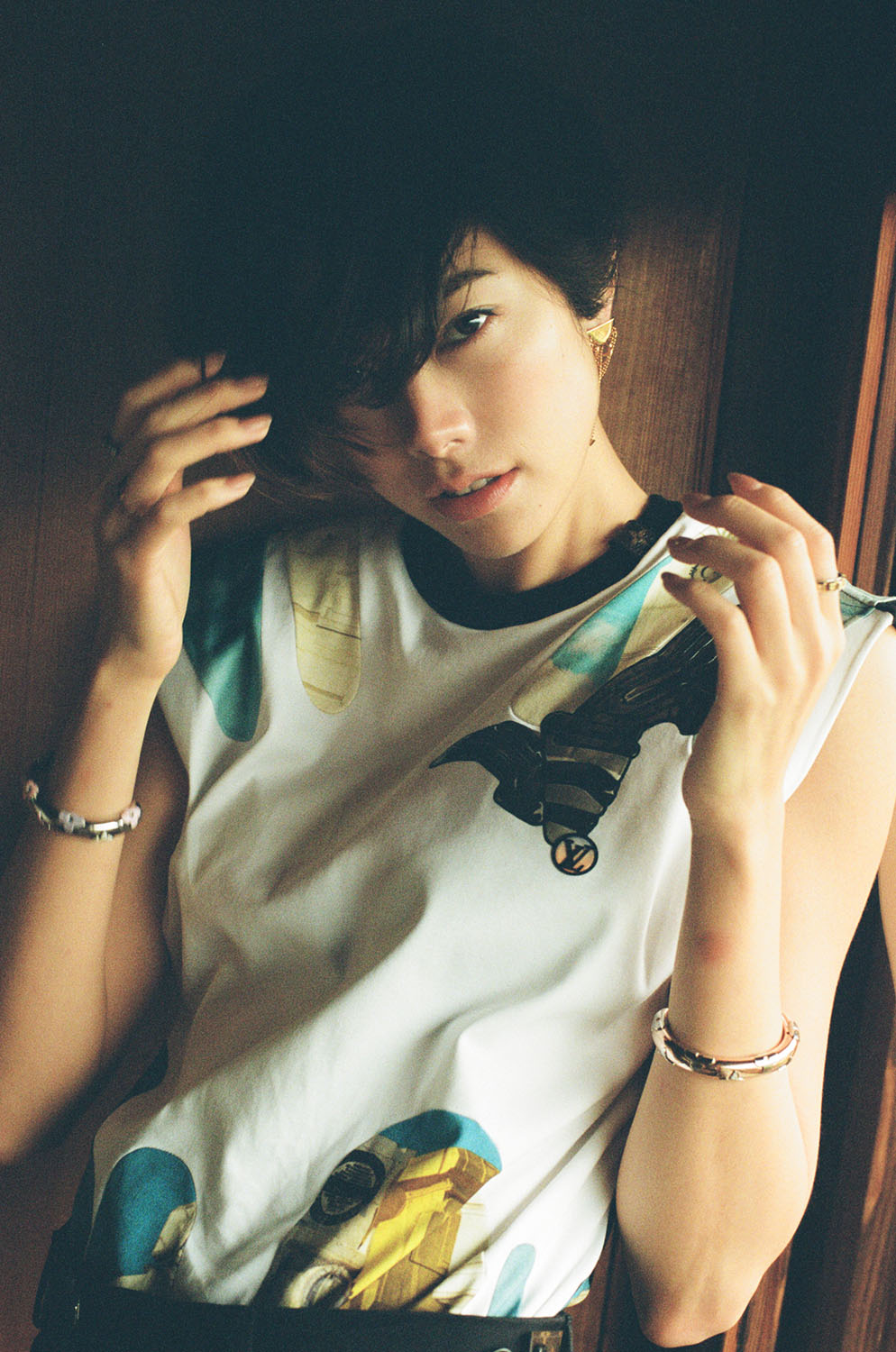 Dress; belt; earring; and bracelets, all from Louis Vuitton

Such appreciation for craft comes with an old-school soul. It’s what I’ve come to discover, as Hikari revealed her latest project that involves her true love—food. Just a week before our shoot, I had my eyes glued to Netflix’s latest culinary series, The Final Table. Lo and behold, guess who turned out to be one of its guest judges? Our cover star herself. “I have my own programme now!” she exclaimed gleefully. This foray into culinary arts continues, as the model puts on another hat. This time, as a television host who goes on an epicurean journey throughout Japan, visiting local farms and procuring her own produce, which she will then cook herself. “There’s a word in Japanese, zeitaku, which means extravagance. If something takes time and love to grow, then that to me, is the ultimate luxury,” she added. “I say that about fashion, too. I love surrounding myself with that kind of luxury.” Indeed, time and love are two of the world’s greatest luxuries, and Hikari understands that completely. In fact, it’s what contributes to her happiness. “When people are able to share that love with others, it’s what makes them especially beautiful. To be happy, I try to make myself healthy by spending time with my family and friends, working out, and eating real food. And to learn!” she said, before letting out a slight laugh. “It’s funny, because I used to hate history when I was in school, but now I find it so fascinating. You have to know the past, in order to know the future.”

And in that moment, the mentee has grown to be the mentor.

So as we wrapped up our shoot, I couldn’t help but ask my trusty Japanese teacher one last question. What does her name, Hikari, mean in English? “Light,” she responded. “But not what you’re used to seeing in the day. It’s the light that emanates from stars. A sparkle.” Of course. Just like her spirit. 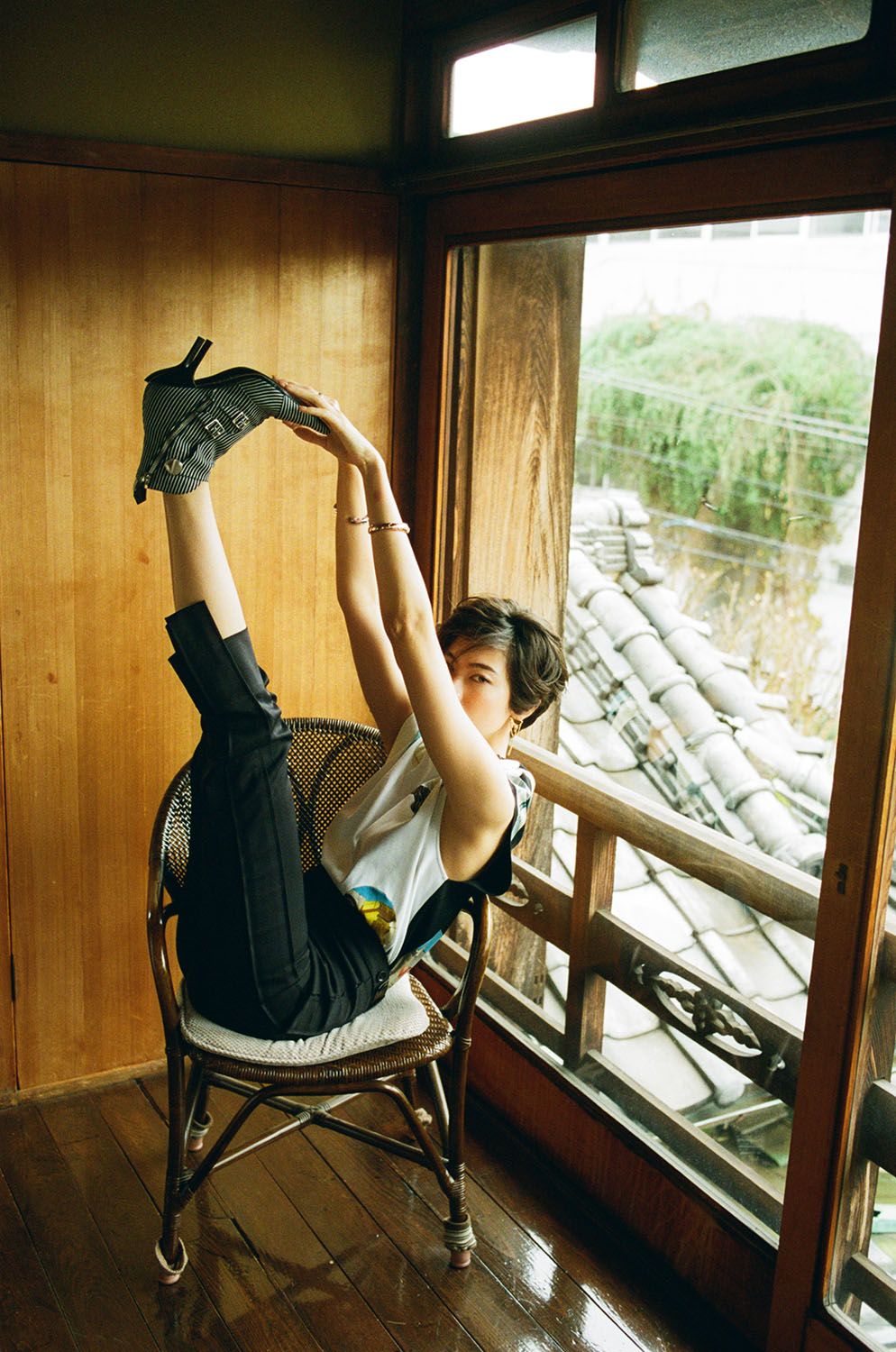 Top; trousers; earrings; bracelet; and boots, all from Louis Vuitton

Fashion
The actor literally sparkled at the U.K. premiere of The King.