Karl Lagerfeld always claimed to be a futurist. “I never look back,” he averred at one of my interviews with him, in his ricocheting manner: “Always forward-forward-forward!” And yet the scope of his historically inspired collections ran deep, wide, and multi-referential, expressed by his Métiers d’Art collections for Chanel that showcased the artisanal work of 26 ateliers under its subsidiary Paraffection, and staged in the most storied destinations around the world. From ’20s Shanghai to ’60s Hamburg, and now re-orienting his mind and eye much further back, to Ancient Egypt, the Temple of Dendur exhibit at the Metropolitan Museum of Art in New York became the double-bill for the Chanel Métiers d’Art 2018/19 Paris-New York collection—sadly, in retrospect, his last.

Perhaps the Pyramids at Giza were much too obvious—he may well have considered flying in his 600 guests—but the 200 sq metre sandstone Temple of Dendur, commissioned in 15BC by the Roman emperor Augustus who ruled Egypt then, that originally overlooked the Nile, made for an extraordinary venue. It was gifted to the United States by the Egyptian government in 1967 for their aid in major restoration work after the Aswan floods, and was housed at The Met since 1978. Within this amazing edifice of two massive temple gates decorated with symbolic reliefs, carvings of papyrus, and ancient hieroglyphics, Egyptian queens and pharaohs coalesced—including a cameo by Pharrell Williams—in Lagerfeld’s interpretation of ancient Egyptian styles meshed with that inimitable ’80s New York spirit.

Gilded in gold, from head to toe 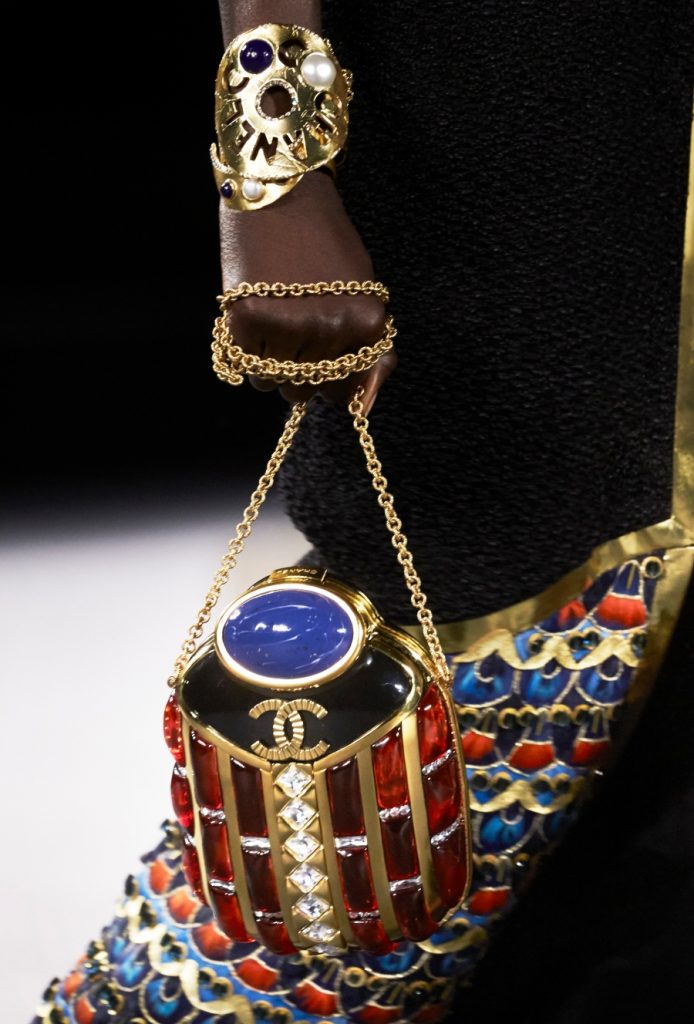 “New York is an energy and a melting pot of cultures, it’s very stimulating,” Lagerfeld said, adding his “fascination with Egyptian civilisation” into the cultural mélange. Who would have thought that the Old Kingdom and New World could ever meet, unless orchestrated by the genius maestro? The show opened with an array of kalasiris, those long, fitted linen dresses that practically made the uniform for women in ancient Egyptian times, here styled as Chanel’s latest take on its signature three-piece, worn breezily under oversized boxy jackets à la Wall Street in nubby beige-and-gold or rich gold-and-bronze tweed, and in Working Girl interpretations of the shendyt traditional skirts the men wore back in the day. Popping it were long amulet necklaces in lustrous stones and precious metals—excess-sorising was de rigueur in ancient times—and the very-now CHA-NEL bejewelled cuffs by Maison Goossens. And yet Lagerfeld’s opening looks were always abstracted ideas that set the tone for his collections, as if taken from his study sketches, each one an elegant and modern page unfolding into the blockbuster showpieces.

Dynasty would be the movie name of this collection, after the period of magnificent Egyptian kings and pharaohs, fast-forwarding to the ’80s primetime American soap of power bitches in killer dresses. Lagerfeld made his name in that era, but eschewed the shuddering shoulder pads of the woman on top for a power neckline cleverly crafted after the plastron collars of ancient Egyptian dress. From a distinguishing structural shape on golden tweed suits and leather bomber jackets, came dramatic variations be it beaded, feathered, or embellished—mostly all of the above—worn on tweed dresses cut into sheath-like silhouettes or the aristocratic detail on XL jumpers by Barrie Knitwear. At halftime, and to the infectious beat of the 1984 “Egypt, Egypt” (by who else but The Egyptian Lover): a magnificent bejewelled collar of carnelian, lapis lazuli, turquoise, and ‘faience’ coloured glass by Maison Goossens, worn over a gold cashmere tunic and gold leather pants, on the god of fashion, Pharrell Williams. 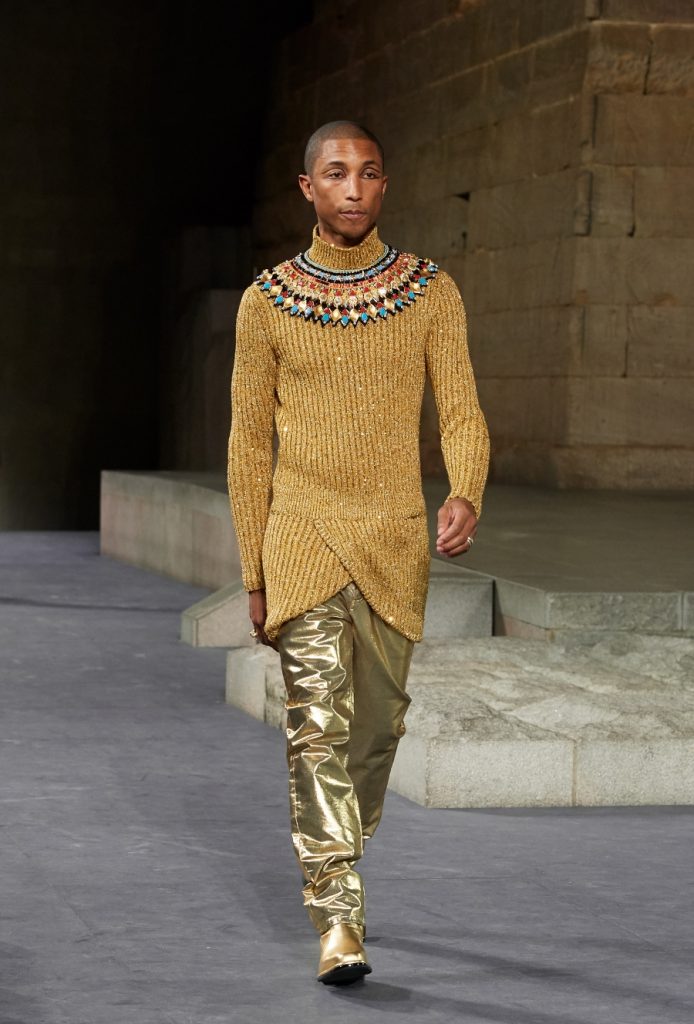 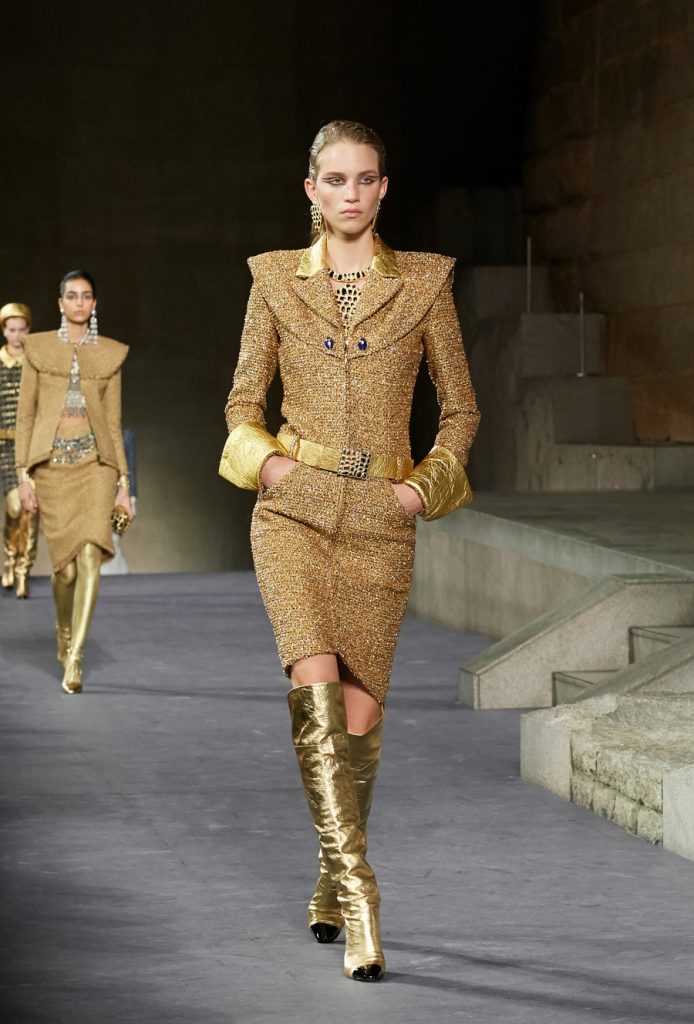 Power shoulders from the Nile

Did I mention gold enough times? Because it clearly was the defining colour, metal, and material of this collection, taken from the richness of Egyptian gold right through the 24K Solid Gold—that totally ’80s TV show of our youth—and the beloved colour of Gabrielle Chanel. The Midas Lagerfeld touched on an entire spectrum of shades and textures, from antique gilded patinas right through to flamboyant 24K in all the finer details: sunshine gold leather cuffs and collars; shimmering gold-beaded silk tops; disco gold booties and leggings; crackled gold on a chic Maison Michel boater (styled after Nefertiti’s crown); and then woven through the tweeds in monochromatics into electric, exotic colours of the Old Kingdom from lapis lazuli to coral reds, burnished ochre to royal purple.

And then there was the Nile crocodile, which made an appearance on aviator jackets, gold knee-high boots, and iridescently gem-embellished plastron collars—but as embossed effects. The croc motif then gilded up on gold-and-onyx jewelled cuffs, as the sequin-embroidered encrusted gems on wraparound miniskirts, and in the form of a massive croc-shaped amulet necklace. In an innovative play on materials, which is what Lagerfeld excelled at like an avant-garde artist, crocodile, iguana, and python were reimagined as crackled or printed reliefs.

On the morning of the show, Chanel made a global announcement that it will no longer be using exotic skins and fur in all of its creations. “The reason why we’ve decided to announce this decision now is because of the Métiers d’Art. We believe that we have talents that are able to

re-offer or restructure in this market, but today it is no longer about the past as it is about the future,” shared Bruno Pavlovsky, president of Chanel Fashion, when we met at The Pierre, New York. “We believe that it has become too complicated, difficult, and complex to ensure the right trustability on these things. We have decided, with a lot of respect for what we have done in the past, to move to something else. It is a big decision for the next generation.”

From the waters of the Nile to the streets of New York, graffiti art came strong through the collection as the hieroglyphic-inspired prototype print for this collection, designed by acclaimed French graffiti artist, Cyril Kongo. Rocking up black leather jackets, aerosol-ed on leather dresses and neon pink graffiti boots with cabochon-bejewelled heels, spray painted on canvas totes, or as gold graffitied CC and camelias on a black 2.55, this Chanel-Kongo collaboration also transformed a cotton poplin dress-bomber ensemble into spectacular artwork in tribute to the defining art of the city.

“It’s where I made my fortune,” said Gabrielle Chanel, whose foray into the New World through this magical metropolis in 1931 made the beginnings of her global fashion empire. And what is New York without its famous skyline? The iconic Chrysler building that represents the stealth—and wealth—of America in its great architecture was fashioned into the embellished graphic motif on two white tweed dresses, dazzling in its nightlight, but also taking on the Egyptian collar placement; and as a fabulously Art Deco rhinestone necklace worn with a BodyMap-styled sweater.

Personally, Gabrielle Chanel truly embodied not only the American dream, but also the empowered woman of the 20th century with her fearless independence, sharp mind, and great ambitions. She fascinated and was celebrated by America, from the upper socials to Hollywood, where she collaborated with Samuel Goldwyn on three of his movies, famously How To Marry A Millionaire—the movie poster advertised the gowns by “Chanel of Paris”. She elevated movie costumes with her exquisite couture and her sense of chic, very much defined by her multi-strands of pearls, little black dresses, and two-tone shoes—which were much copied, too! Off-screen she was dressing the stars on the red carpet from Gloria Swanson to Norma Talmadge, while Truman Capote declared her a “fashion visionary”. 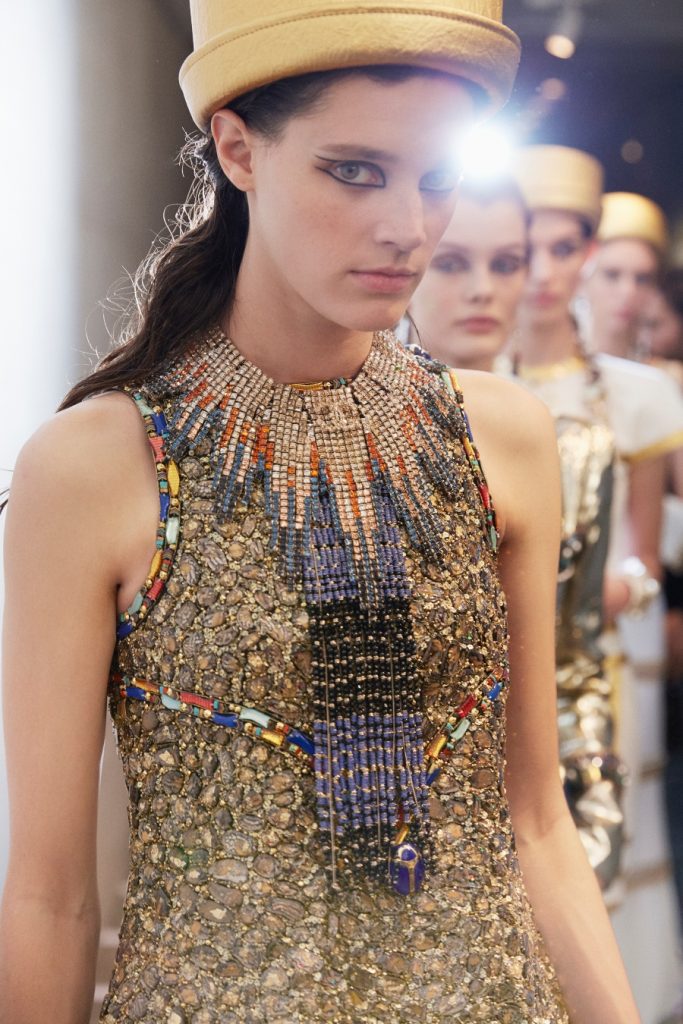 Jewels reminiscent of the Chrysler building

In 1957, she was awarded the Neiman Marcus Fashion Award for Distinguished Service in the Field of Fashion in Dallas by the founder’s son Stanley Marcus—a tribute that became the very basis for Lagerfeld to stage the Chanel Paris-Dallas Métiers d’Art 2014 collection in the Texan city.

Back upstate, this was not the first Paris-New York Métiers d’Art collection, the first being in 2005 to coincide with the opening of the 57th Avenue store and the blockbuster Chanel retrospective at The Metropolitan Museum of Art, where a record-setting 460,000 people attended. Still bitten by the Big Apple, the following year Lagerfeld showed the Chanel Cruise 2006 collection at the iconic Grand Central Station, which then started his penchant for staging shows at epic locations … and inspiring the whole upswing for destination shows.

The fabled museum that has become the epicentre for major fashion events—this show just fresh off The Met Gala and its exhibition ‘Camp: Notes on Fashion’—was the perfect theatre for Lagerfeld’s cultural project. The finale was as if Egyptian paintings on papyrus came alive in classical-yet-cocktail dresses of dazzling feather marquetry by Maison Lemarié in deep red, jet black, and lapis lazuli, dressed up with appliquéd-and-beaded plastron collars—you could imagine the complex procedure involving hundreds of hours of work. The mythical scarab, sacred to the ancient Egyptians, was made the objet du jour by Maison Goossens on necklaces, buckles, and earrings in semi-precious stones, also the most capricious minaudière of the giant beetle. Waitlist! And trending soon: The mini pyramid bag in black and gold.

Precious fabrics, artisanal jewels, heritage techniques, and poetic design to the point of decorative arts, and yet with contemporary patronage, Chanel’s Métiers d’Art collection is the love story of the craftsman and the couturier. And Lagerfeld’s deep dedication truly elevated the imagination, with appreciation for the extraordinariness. Yet these were not at all costumes but creations within a paradigm of elegance and excellence—halfway between art and design, with a clear attitude for innovation and beauty. Chanel Métiers d’Art Paris-New York 2018/19 via Ancient Egypt was fashion from another era; not the past but the future. A dream time, Lagerfeld disclosed, in the scintillating shadow of a city that never sleeps.

Check out the key accessories from the collection below. 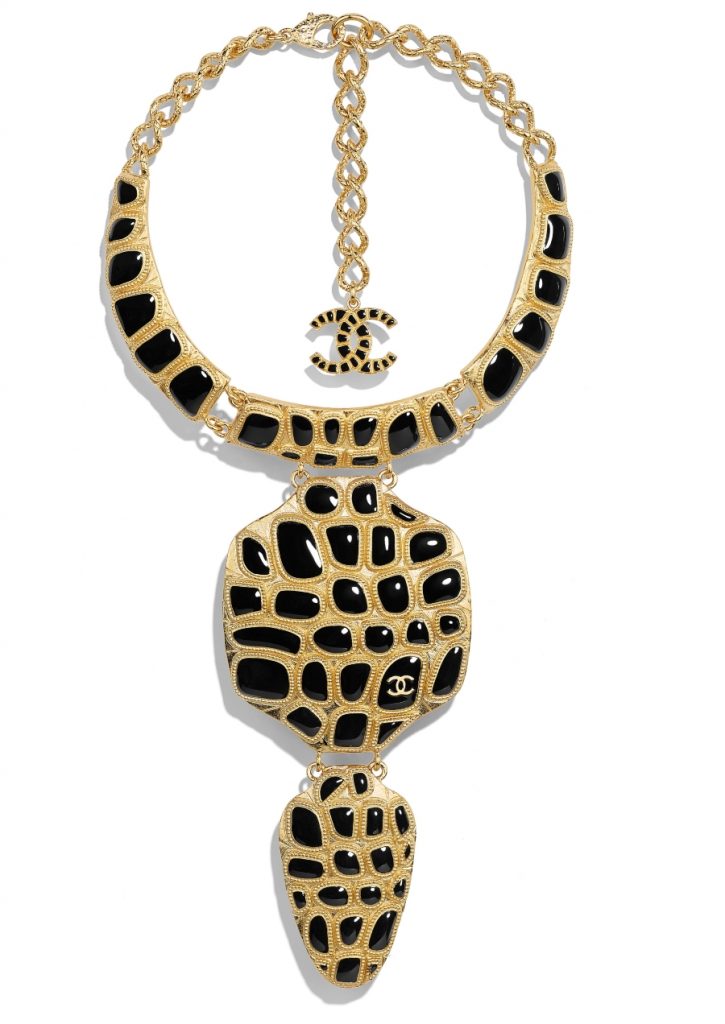