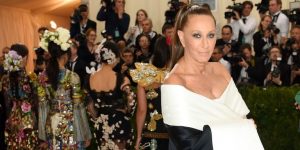 Donna Karan has asked for forgiveness after her controversial comments made about Harvey Weinstein last week.

The famed fashion designer questioned whether women “are asking for it” when it comes to sexual assault and harassment. She was accused of victim-blaming and many said that they would boycott her brand after she made the following on-camera comment at the CineFashion Film Awards in LA:

“How do we display ourselves, how do we present ourselves as women, what are we asking? Are we asking for it, you know, by presenting all the sensuality and all the sexuality?…It’s not Harvey Weinstein. You look at everything all over the world today, you know, and how women are dressing and, you know, what they’re asking by just presenting themselves the way they do. What are they asking for? Trouble.”

Now, in a hugely apologetic, remorseful interview with WWD, she has pleaded with the public to absolve her.

Her quotes shocked the industry and beyond – Karan is known for empowering women and for her sensual campaigns. She put her comments down to fatigue and fear.

“I heard a little bit of rumour. It was not like I had heard the entire story,” she said. “It was like a complete rumour that I had heard and I didn’t want to comment on it. So I kind of weaved my way around it. I know Georgina [Chapman, Weinstein’s wife and principal designer of the Marchesa brand], I know Harvey, and I didn’t think it was appropriate for me to be commenting on it, so I wiggled my way out of it. However, what I did comment on was sexual harassment.”

The designer acknowledges she shouldn’t have said what she did, calling the quotes “inappropriate” and “stupid”. The designer also says she hadn’t heard of the claims prior to last week.

“I was exhausted, I was tired and — [when] it came back to me, I was shocked that I even said this myself. Because I was preparing in my mind what I was going to say in the theatre,” she said. “And I just went off on something that I shouldn’t have, and I apologise profusely. I regret it so strongly. I think every woman who knows me, and I have [worked for] them in all sizes and all shapes, all I do want is women being free to express themselves. And that has nothing to do with being disrespected, molested and harassed. Absolutely not.”