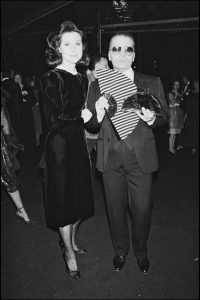 The designer with a friend at a fan-themed party in Paris.