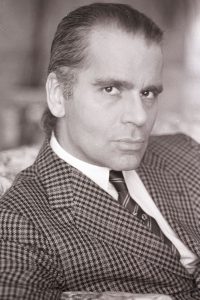 In checks for a portrait taken at the Pierre hotel in Paris.