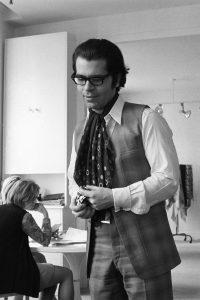 In 1964 he began freelancing for Chloé before eventually joining the brand full-time.