DVF has announced that Nathan Jenden has been appointed as Chief Design Officer & VP, Creative, returning to the brand where he worked for ten years until 2011. Mr Jenden will replace recently departed Jonathan Saunders and will oversee all design for the brand. 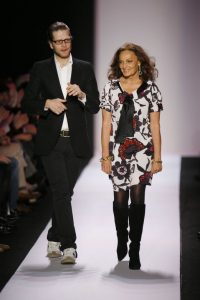 ‘It is with joy and pride that I look forward to welcoming Nathan back at DVF. Nathan is an extremely talented and technically skillful designer who also has a great gift at surrounding himself with young, emerging talent. He totally embraces the DVF woman and the brand enjoyed its greatest commercial success during his tenure’, – Diane von Furstenberg, Founder of DVF.

Nathan Jenden says ‘the fundamental essence of DVF that Diane created is an identity that has empowered women everywhere, delivering accessible style, confidence, independence and a sense of self-worth. Diane delivers that message not only through fashion, but in her approach to life, her love of art, culture, diversity and philanthropy. I see DVF as being more relevant today than it ever was in its message of self-empowerment while being dynamic and modern. I want to give the DVF girl what she wants when she wants it, and with the joie de vivre and sense of purpose that epitomizes Diane, DVF the brand and the spirit of women today. And most importantly of all I want to make great clothes that resonate with women’

Mr Jenden will report directly into Diane von Furstenberg and DVF’s board. His first collection will be Fall/Winter2018, to be shown in February.