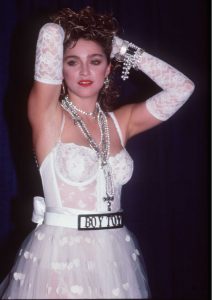 Madonna made bridal wear chic – and sexualised – in 1985, when she donned white lace, rosary beads and gloves for her Like A Virgin music video and performances; an outfit now considered to be one of her most iconic looks. The ‘wedding dress’ went on display at the Hard Rock Cafe in Times’ Square in 2011 and has spurred endless copycat Halloween costumes in the decades since.