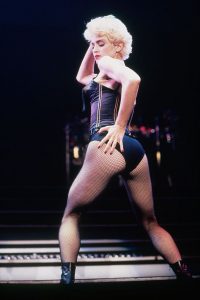 A few years later, in 1987, Madonna cropped and bleached her hair but kept the signature dark eyes and red lips. She also entered the foray of leotards, fishnet tights and boots, a look that would become an on-stage staple in her decades-spanning career.