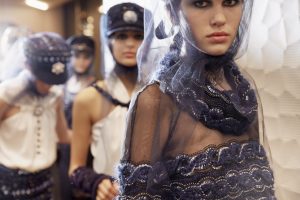 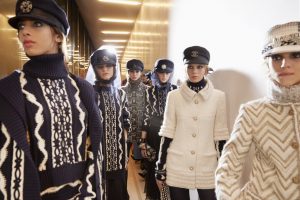 Metallic tweeds and seafaring sweaters, always with a sailor cap

Natasha Kraal joined the audience at the world-famous Elbphilharmonie for Chanel’s stellar Métiers d’Art show that fused music, architecture and fashion in one glorious night.

Full circle, they say, fashion goes around and comes around. For Chanel, everything revolves around Gabrielle Chanel, her century-old legacy kept aesthetically alive in the hands of her artisans with every creation paying homage to her epic life and loves, her inimitable style and spirit. Sometimes the thread is imaginary – “the Shanghai of her dreams” set the stage for Chanel’s Pre-Fall 2010 show I attended in a fantasy barge on the Huangpu River. But there was a particular difference with the Chanel Paris-Hamburg Metiers d’Art 2018 collection. This time it was the story of Karl Lagerfeld, who was born in the northern German state in 1933 – although he claims to be younger than his 84 years – and lived there until he was sent to Paris for his secondary education, thereafter skyrocketing into fashion when he won the International Wool Secretariat prize in 1954.

Hamburg, however, has always remained in his imagination, he expressed, a part that never left, and one he stylistically romanticized for his latest Metiers d’Art extravaganza staged at the newly minted Elbphilharmonie concert hall. It was here, in the Herzog & De Meuron-designed architecture on the historic River Elbe that his personal collection for Chanel crisscrossed down the stairs and through the “vineyard” walkways of the state-of-the-art auditorium. To the hauntingly beautiful strains of ‘La Paloma’ – practically the hymn of Hamburg, where in 2004 the song entered the Guinness Book of World Records for being sung by the largest choir of 88,600 people – sauntered the 87-strong collection of seafaring Sixties, inspired by the men’s sailor uniforms of that time, being a major shipping port, each look topped off perfectly with a fetching elbsegler by way of The Beatles (who cut their first album here) by milliner Maison Michel, some wrapped alluringly in tulle, others embellished for dramatic flair. Score after score, classical crescendos to electronic pulses, played the live orchestra helmed by young British cellist Oliver Coates (so cool in a hoodie and sneakers!), as the models took to stage, like mysterious heroines and capricious socialites from a James Bond movie circa Sean Connery. The audience was rapturous, and the band played on … 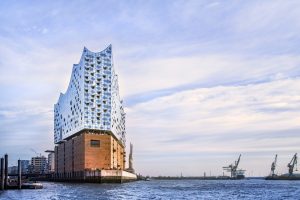 Lagerfeld has famously said that he’s never sentimental, and ever the futurist, but this could be the fine equilibrium between the Hamburg of his emotions, underscored by his fashion-forwardness. The building itself, in the manner of his magnificent show sets, is even more symbolic. “The Elphi”, said to be the largest and most acoustically advanced concert hall, designed by renowned acoustician Yasuhisa Toyota, and defined by its 1,000 curved glass panel facade that reflects the sky, sun, sea and city, sits curiously atop the oldest warehouse Kaispeicher, all rust-brown and built in 1875. Therein this old and new, history and the abstract, the fusion of perfect stylistic harmony of contrasting colours, character materials, and compositional lines inspired the aesthetic energy of the Pre-Fall collection. Similarly, it makes the very ethos of Chanel’s spectacular Metier d’Arts – its 16th since debuting in 2002 – that showcases the meticulous handwork, precious fabrics, and elaborate techniques of its exclusive 11 artisanal workshops, giving them fresh modernity within this extravagant exercise.

Fashionably elegant best describes Chanel, what more with the classic sailor theme, here opening with an all-navy-blue series of cable-knit jumpers, styled into dresses with matching thigh-high legwarmers, as the men wore the sweaters with sailor pants, pipes in hand and duffel backpacks on. This segued into regimented navy uniform looks of three-piece suits and heavy frock coats in striped grey flannel, and chequered pea coats gussied up with glass-beaded star, anchor and lion strass brooches by Desrues. Setting the tone of the collection, they also showcased the star accessories: patent spool-heeled brogues by shoemakers Massaro, adorned with embellished bows by costume jeweller Maison Desrues; and the novelty accordion bag that debuted with the very first look on German model, naturally, Anna Ewers – said to be Lagerfeld’s “updated” Claudia Schiffer.

The textures and colours picked up in multi-tone tweeds, some jostling with their boxy jackets and long coats, but all illuminating ideas of the exposed bricks of the docks in the Hanseatic port, and the curvilinearity of the Elphi. In hand, a double case of a cargo container minaudiere or a miniature buoy masterpiece, with the Kaiser’s tongue-firmly-in-cheek. Rust brown made a powerful shade, taken from the old warehouses, in contrast to the iridescent charmeuse and metallic mosaics appropriated from the Elphi as Lagerfeld’s eloquent play of past and future, music all around.

What I loved most were the unique navy-and-white sweaters by Barrie, the Scottish cashmere knitwear atelier acquired by Chanel in 2014, in the most intricate display of seafaring knots. Look 27 was worn with a mellifluous chiffon midi skirt cinched with a bejewelled brooch as stacked bangles and bracelets by Goosens anchored the look with edge. Then came a 60s mod mini dress of feathers forming sailor stripes by Lemarie in the best case of creative whimsy and sublime execution. The latest addition to the ateliers, master pleater Maison Lognon displayed its unique skill with a hand-pleated silk satin jacket fashioned as a modernist winter puffer.

What’s Chanel without its buttery black leather, this time cut into sailor culottes and striped tunics, and crafted into a lace-effect leather peacoat? And the gloves by Causse were perfect accomplices to each style –those fingerless cashmere arm-warmers brought a whole level of cool to each look they accessorized. For night, the rendering of oil-slick sequins by Lesage on a two-piece tweed jumpsuit, prismatic embroidery on cut-out dresses by Montex, a wide-leg tuxedo or the all-velvet navy version redefined classic evening chic. And like a quiet poem to close, the final look was a fairytale dress of white feathers floating underneath a gossamer cape of embroidered black flowers … a reverie of light and lightness with the violins on high, into the dramatic finale where Lagerfeld took his bow to the replay of ‘La Paloma’. 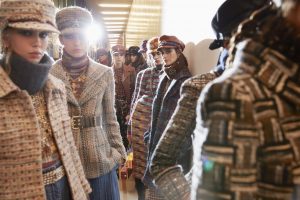 Beatnik-style tweeds in a melange of reds, browns, and blues 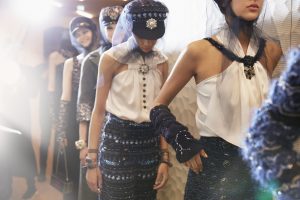 If anyone was looking for fashion cues, it was really the cast of characters in Lagerfeld’s dream Hamburg: the sailor girls and boys, the nightwalkers versus the officers, the 60s Beatniks in their breakaway styles and the bourgeois intelligentsia, the gangsters and the aristocrats, all with a touch of the Beatles, who famously launched their careers on the fringes of the Reeperbahn red-light district, and inadvertently the trend for the sailor cap. You have to know Lagerfeld’s intellect and sense of humour to totally get his unabridged story – it’s about dressing the part with a touch of impertinence – plus some understanding of 60s Hamburg with its dark grittiness, salt-infused energy, and cultural creativity. Take this all, and put it in one of the most impressive architectures of the 21st century – tune in music made like art – and there ladies and gentlemen, you have the greatest show of the season, written, directed and produced by the Kaiser as his homecoming opus. 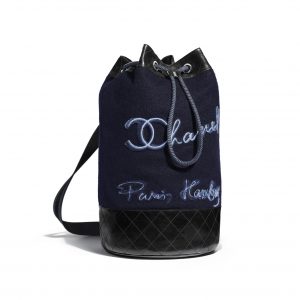