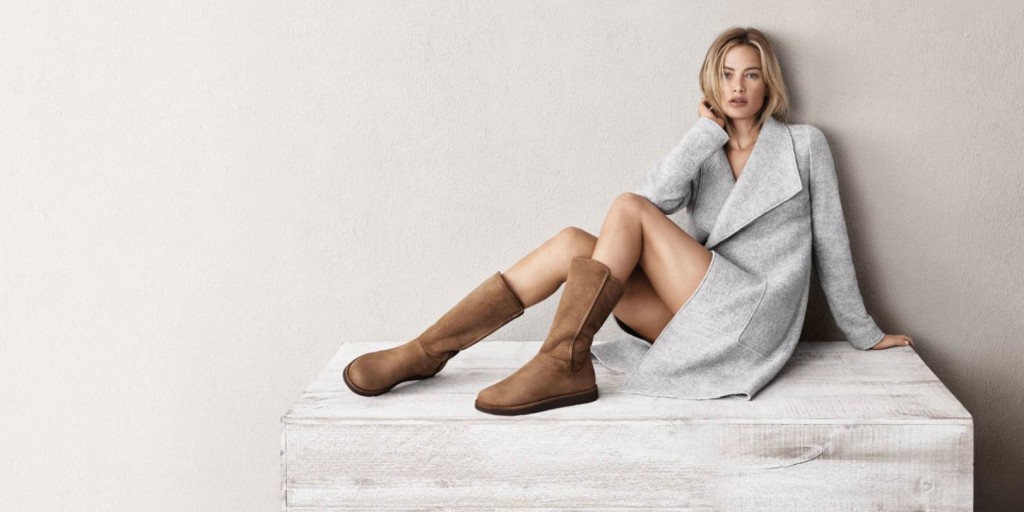 Harper’s BAZAAR: Why did you decide to partner with UGG this season?
Carolyn Murphy: The partnership with UGG is very serendipitous actually; I grew up with the brand. I have uncles who spent a lot of time between Australia and Santa Barbara, where they would surf (they went to UCSB), so I actually know the UGG boot very well. They were always a part of my life growing up, and when the brand  asked if I would shoot their campaign I got super excited, not only because I knew I would have access to these boots, but I was even more excited because there’s obviously a real authenticity. I was really surprised when I showed up to do the shoot, because of this new “Classic Luxe” collection— you know, being a little bit more tailored and having a different shape.  I’m excited about that! People have this notion of the UGG boot being the UGG boot, ​but as you can see it’s very different this go-around.

HB: It’s interesting how people originally saw them more as snow boot but they’re also for the beach.
CM: I think that they’re really transitional—snow, surf, whatever it is. They’re so comfortable, and even the people who say that they don’t wear them…you know that they do. There’s the naysayer, but there’s nothing like them out there and to be able to slip on an UGG boot in the fall and winter, and especially for me after surfing, which is how I was introduced to them. It’s really interesting to have this different shape. They’re more wearable for everyday. It’s pretty exciting.

HB: What’s your favorite way to wear your UGG boots off the beach?
CM: It’s interesting because when we were doing the shoot, it was kind of dreamy because we had these gorgeous coats and knits. I loved the chunky sweater with a really great leather pant. We did that toward the end in an off-the-cuff moment for the look book. If feels super casual, but still doesn’t look sloppy. It doesn’t look like you just rolled out of bed.

HB:Rewinding back to the current summer season—where are some of your go-to summer spots?
CM: I’m in the Hamptons quite a bit just because my daughter rides horses there. This year we’re trying to venture out a little bit more though. We spend a lot of time in Costa Rica. I’m thinking of actually going back to Santa Barbara, we have so much family out there and then maybe we’ll skip over to Hawaii, but our getaways are usually oriented around the beach. Occasionally we’ll go to Europe, do Italy.

HB: Where are you favorite surf spots?
CM: Rincó​n, Puerto Rico is definitely my favorite. I love Bali, Costa Rica, anything that’s super simple. I like to keep it pretty close to home.

HB: What’s your post-beach beauty like?
CM: Now that I’m nearing 42, it’s different because I’m seeing the effects of my sun-worshiping days. I’m really heavy on sunblock— I’ll do pure Zinc, but sometimes that can be really drying, but then I’ll use my Clarisonic after to get all the sunblock off post-beach. Rinsing off my hair with pure water and lots of leave-in conditioners. I’m really loving the Rene Futerer conditioner right now, it’s just a great hair-conditioning mask. Shu Uerma makes a great one, but anything that’s moisturizing and hydrating for the skin. The Re-nutriv line from Estee Lauder— can’t go wrong there—my skin just soaks it right up. It’s all about moisture.

HB: What’s your favorite sunblock?
CM: ​I’ve been struggling with that lately but I’m going back to old school zinc—’80s style where I can choose colors, like hot pink across my nose. You have to be really careful, there’s so many selections out there now. Coola has a great mineral sunblock. I think if you can stay with the mineral sunscreen or with what they call “physical sunblock,” what’s great about using pure zinc because there’s no added chemicals—just lap it on. I might even start wearing one of those UV hats!

HB: What’s left on your summer bucket list?
CM: I actually planned on going down to Chile, which is so beautiful. I was last there in 2007. They have opposite seasons to us, so it’s more of their winter now—but it’s so gorgeous. You really feel so close to the sky and the stars, and surfing there. But now my goal for the end of the summer is to go somewhere to do community service. I was originally planning to go down to Guatemala so my daughter could get out of the Hamptons set and really give back and work in some of the schools, which is what I did in the ’90s down in Costa Rica. I spent two weeks ripping up an old school or re-building an old school, just giving back in some way. I think that would be very beneficial for her.