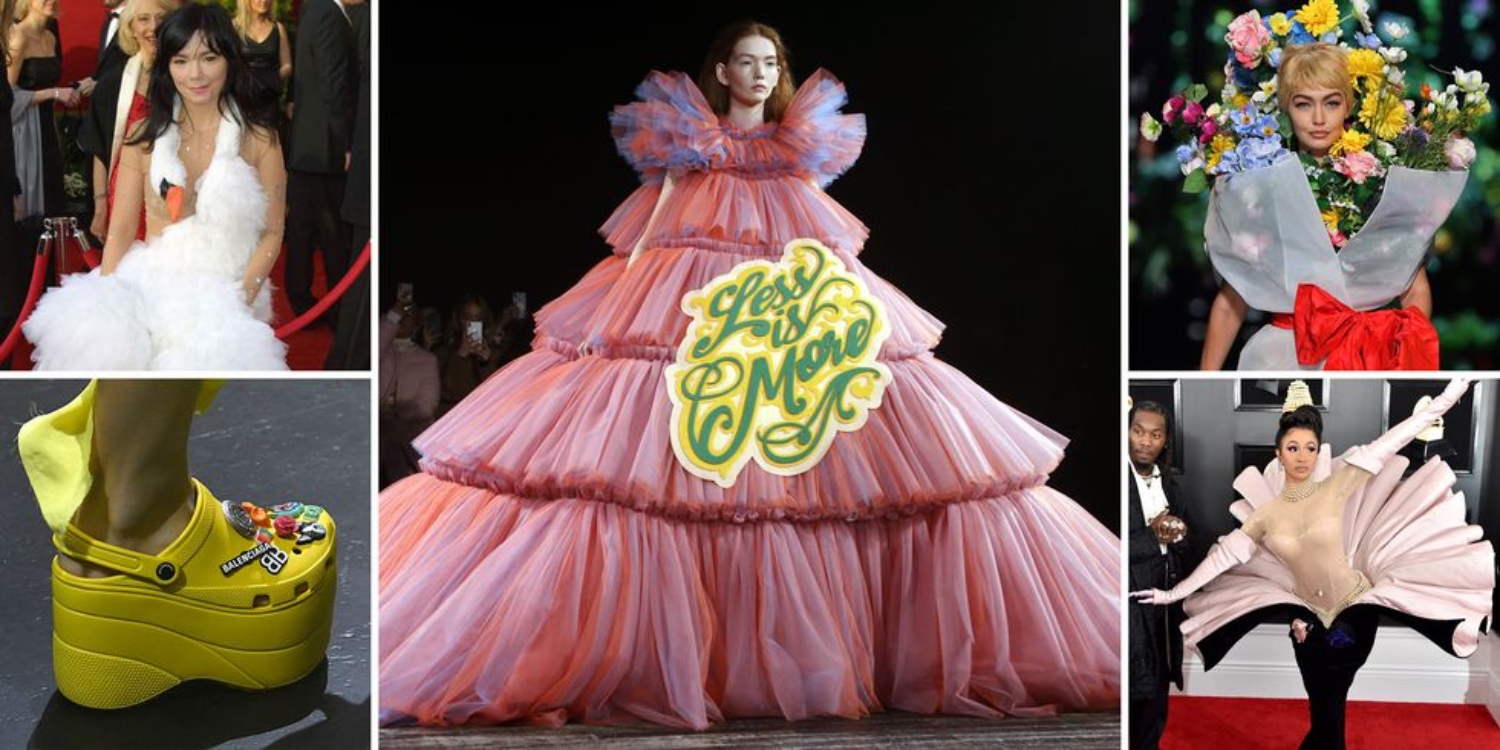 Fashion /
Fashion News
The new exhibition is a reminder that fashion is best when it doesn’t take itself too seriously.
By Lauren Alexis Fisher 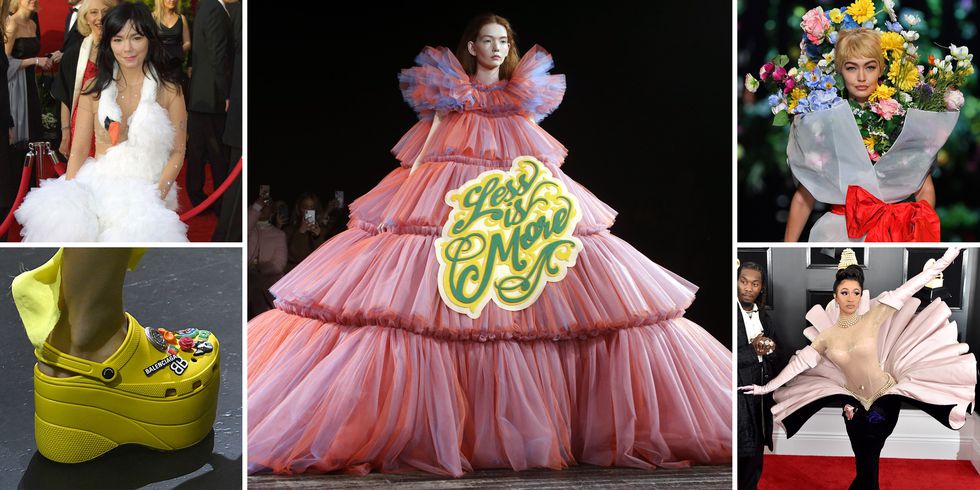 A lot of people are still confused about what “camp,” the theme of this year’s Met Gala, actually means. But as soon as you set foot in the Metropolitan Museum of Art’s new costume exhibit, all becomes clear: Camp has nothing to do with tie-dying t-shirts at summer camp. It has everything to do with basking in the fabulousness, irony, and humor of being extra.

From Balenciaga’s towering platform Crocs to Björk’s infamous swan dress and the Mugler oyster shell gown Cardi B wore to the Grammys, the “Camp: Notes on Fashion” exhibit is an exploration of how over-the-top fashion (or more accurately, FASHUN) has been used as both a form of expression and escapism throughout history. The concept was inspired by Susan Sontag’s 1964 essay that defines camp as “love of the unnatural: of artifice and exaggeration.” 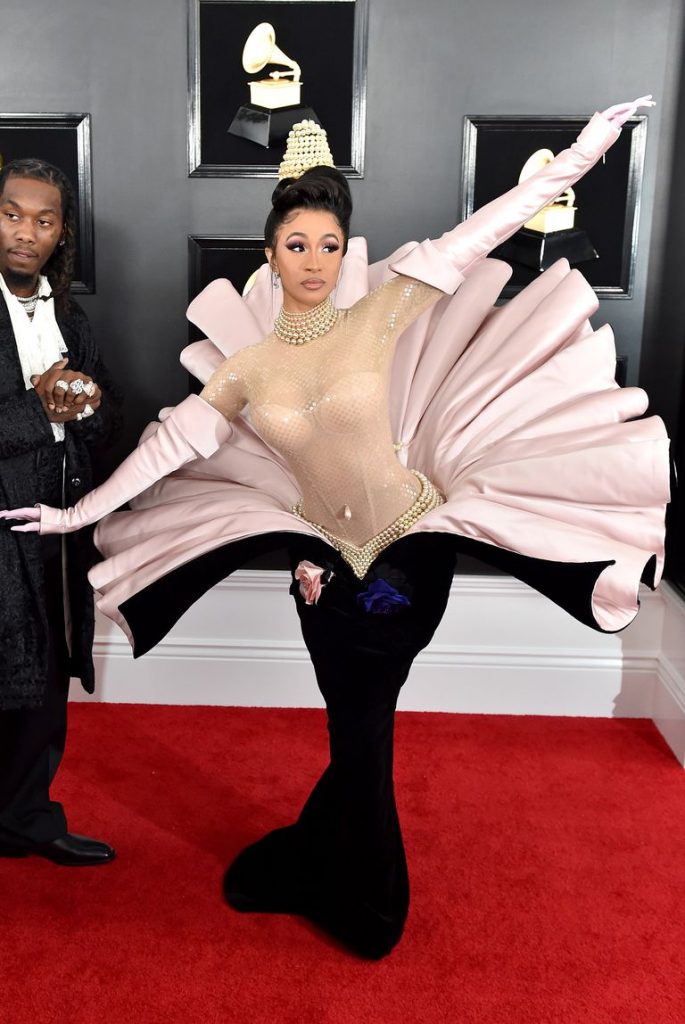 The vintage Mugler Couture dress Cardi B wore to the 2019 Grammys is on display at the Met’s Camp Exhibit.
GETTY IMAGES

Though Sontag took camp mainstream, the aesthetic originally stems from queer culture and dates back to the 17th century. Still, the art of camp remains hard to define to this day.

But in our current divisive political landscape filled with polarizing Internet opinions and a never-ending news cycle, camp is more timelier now than ever. “We’re experiencing a resurgence of camp not only in fashion, but in culture in general, ” Andrew Bolton, curator of The Costume Exhibit said at the exhibition’s preview this morning. “Camp tends to come during times of cultural instability.”

Why is that, exactly? Well, what better way to process times of chaos and instability than through extreme fashion that serves as a fun form of escapism? It can be theatrical, it can be ironic, it can even be humorous, but no matter what, camp is a crucial way of capturing and expressing the zeitgeist of any time period in culture.

Camp has arrived! 🎉🎉 Tonight we host the 2019 Costume Institute Benefit celebrating “Camp: Notes on Fashion,” open to the public this Thursday, May 9. 👆Watch our IG Story for a sneak peek inside the exhibition and join us here later for live coverage of The Met Gala red carpet, starting at 6pm EDT. #MetCamp #MetGala

In an age of toxic masculinity in Trump’s America, it’s now more important than ever to hold onto and highlight camp’s original roots: the LGBTQ community.

The first part of the exhibit looks back to queer subcultures of Europe and America that largely defined and explored homosexuality through camp in the late 19th and early 20th centuries. There are portraits of nude male bodies by photographers like Robert Mapplethorpe and Thomas Eakins, as well as a statue of the Greek God Antinous, Hadrian’s lover, which Bolton refers to as the “archetypical camp pose.” Today’s camp movement can be largely defined by drag culture.

Camp has arrived! 🎉 Join us today for a sneak peek at the highly anticipated 2019 Costume Institute exhibition, “Camp: Notes on Fashion.” #MetCamp pic.twitter.com/Cc6ceevMaG

While the first half of the exhibit highlights the early, less obvious stages of camp, the second half is an ode to “deliberate camp,” which is the more in-your-face side of camp. Think Viktor & Rolf’s meme-able couture gowns that read “Less Is More” and “Sorry I’m Late I Didn’t Want to Come.” Think Moschino sending Gigi Hadid and Kaia Gerber down the runway dressed as human-sized floral bouquets. Think wearing a giant feathered swan on your head instead of a baseball cap. 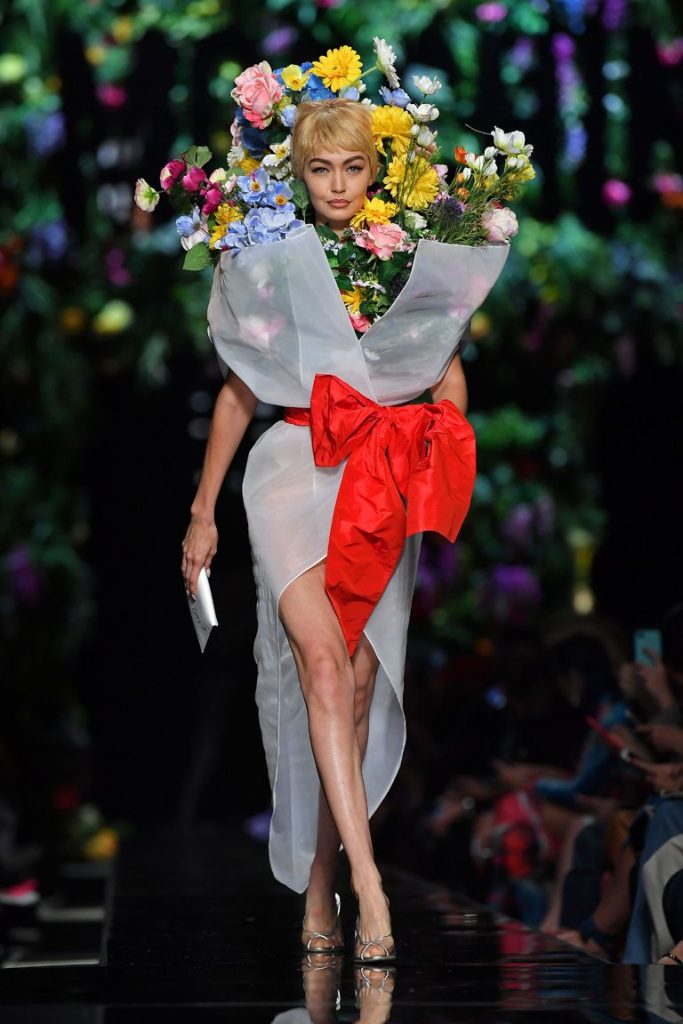 Gigi Hadid as a bouquet of flowers on the Moschino runway.
GETTY IMAGES

To put it most simply, it’s basically just a room full of the most FASHUN pieces from the last few decades that none of your relatives on Facebook would ever understand—and that’s the most fun part of it all.

Camp is just another word for FASHUN, HUNNY‼️ When I have kids, this is how I’m going to dress to pick them up from school. Enjoy these crooked/blurry sneak peaks at the Met’s new Costume Exhibit before tonight’s #metgala lewks…

Still confused about camp? Don’t feel bad, Bolton himself says the term is “nearly impossible to define or summarize.” Perhaps that’s the point of it all. Either way, the exhibit is a reminder that fashion is at its most fun when it’s not taking itself too seriously.

The Met’s Camp: Notes on Fashion exhibition opens to the public on Thursday, May 9.

Fashion News
A GoFundMe has been started for the 68-year-old supermodel whose Medicare won’t cover treatment in Paris.

Celebrity Watch
The Duchess of Cambridge received some important recognition on her wedding anniversary.

Beauty Buzz
Why skin that’s exploding with energy should be the standard for healthy skin.
Type keyword(s) and press Enter
WordPress Lightbox Plugin