Priyanka Chopra, Sophie Turner and Danielle Jonas star in the Jonas brothers’ music video, Sucker. The three of them wear a series of avant-garde luxury looks in the high-budget video.

The trio of brothers sing the lyrics to their respective partners: “I’m a sucker for you/Say the word and I’ll go anywhere blindly/Any road you take you know that you’ll find me” and “You’re making the typical me/Break my typical rules.” 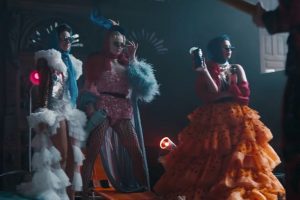 The video is set in an expansive country mansion and has an Alice in Wonderland-esque fantasy theme. Turner and Jonas are seen at the start lounging on velvet throne-like chairs with a number of rabbits at their feet – presumably a reference to Queen Anne’s 17 rabbits that saw airtime in Oscar-winning film The Favourite. Chopra is later filmed riding a bike through the grounds with a fantastical headpiece, while Turner takes a bath outside while sipping and throwing around champagne. 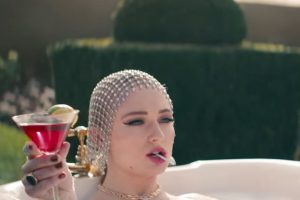 Throughout the course of the video, each couple shares some dedicated screen time, with Chopra and Jonas dancing together. Sucker finishes with a lavish banquet, before the group pose together for a family portrait.

Chopra and Jonas got married in December 2018 at Umaid Bhawan Palace, Jodhpur in traditional Hindu and Christian ceremonies.