Us Offers A Terrifying Vision Of Judgement Day 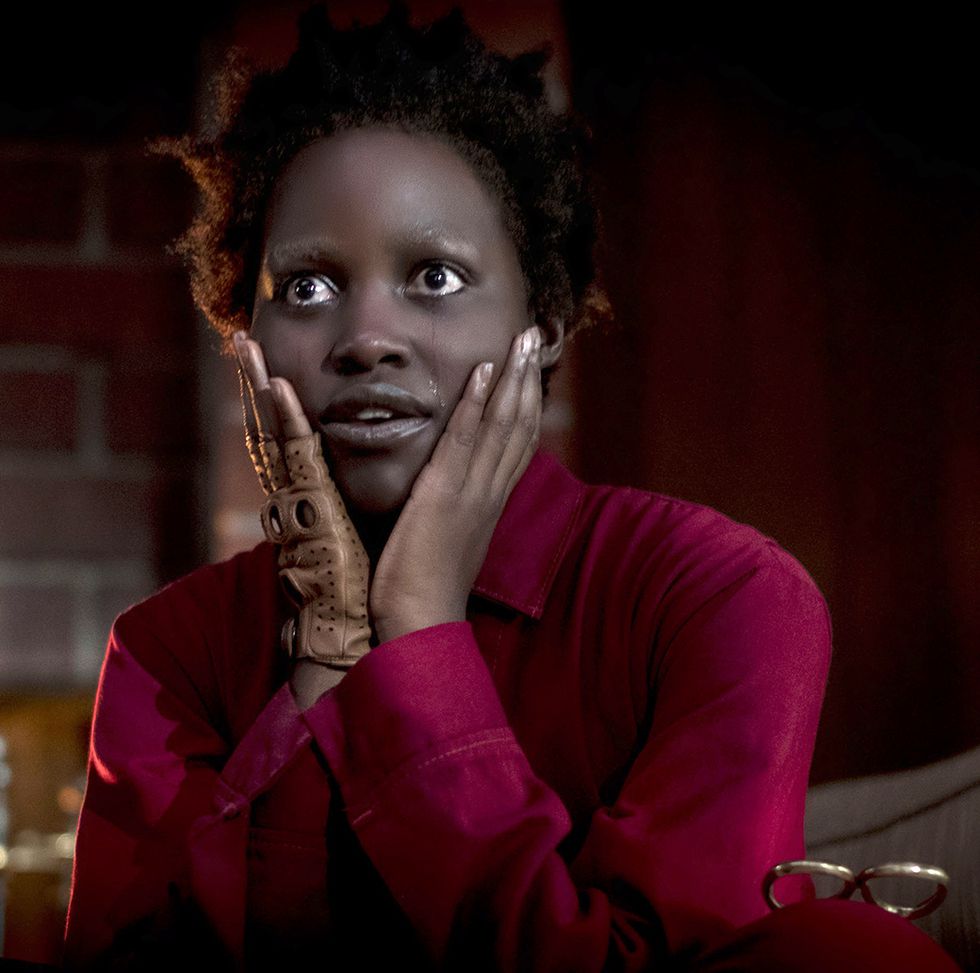 For the faithful, religion is a comfort. It allows us to believe we’re not alone, that there’s a presence that will catch us if we fall, that no matter what we do, we’ll be forgiven—as long as we keep the faith. The horror genre loves to contemplate the absence of faith in films like The Exorcist, The Omen, and even The Nun, movies where souls are eternally damned and retribution rises from a very dark place. Writer/director Jordan Peele takes it a step further in Us, his new movie that highlights a society untethered from faith and comprised of humans entirely self-consumed and detached from one another.

The disturbing new horror film centers on a vacationing nuclear family. On the surface, the Wilsons are just like many of us in today’s digital age: Completely disconnected from each other and engrossed in their own needs, desires, and fears. Three members of the family are immersed in pedestrian preoccupations: Teenage Zora (Shahadi Wright Joseph) tunes out the world with earbuds and the latest jam; her younger brother Jason (Evan Alex) hides behind a mask, only pulling it up to eat or receive a stern talking-to from his parents; dad Gabe (Winston Duke) is obsessed with family time on his terms, from showing off his crappy secondhand boat to forcing them into a beach day at Santa Cruz.

But mom Adelaide’s (Lupita Nyong’o) anxiety is different. For her, returning to the beach means returning to the scene of life-altering terror. As a child, she encountered her own twisted doppelgänger in a funhouse mirror at the Santa Cruz amusement park. More than just a reflection, the twin was a physical being: dominating, horrifying, and possessing a mind entirely of her own. A sign at the park Adelaide sees just before the fateful encounter reads, “Jeremiah 11:11,” referring to the Bible passage that includes the foreboding words, “Therefore thus saith the Lord, Behold, I will bring evil upon them, which they shall not be able to escape; and though they shall cry unto me, I will not hearken unto them.” It’s a warning Adelaide didn’t heed—a prophecy she’s lived with ever since. 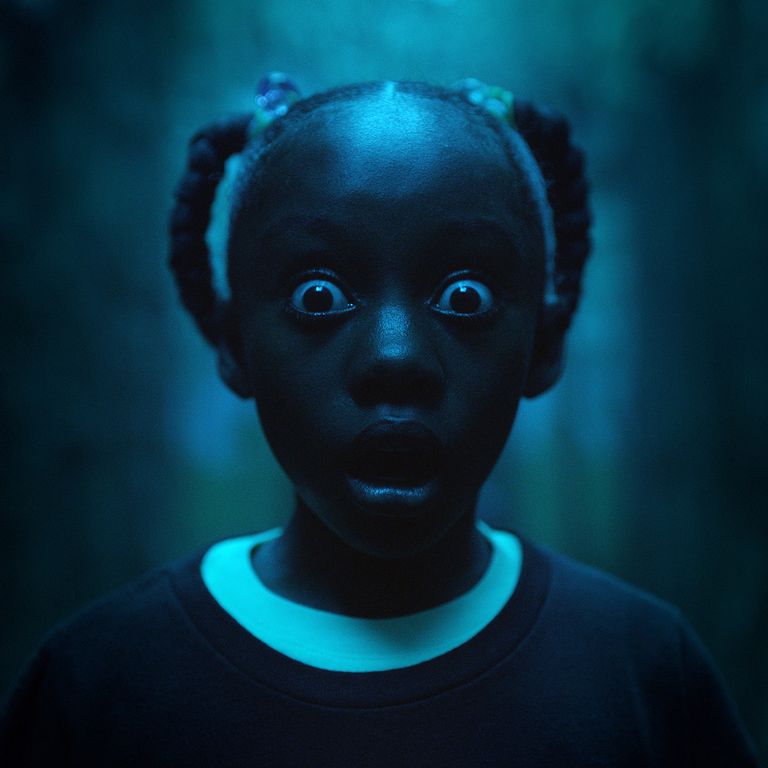 Madison Curry as young Adelaide in Us
Universal

Though Adelaide managed to move forward in her life, keeping up appearances as the portrait of a loving matriarch in a perfect family, she can’t keep the wrath promised in that sign at bay. Her dread begins to creep in as she returns to the past, her preoccupation with the memory of that ghoulish counterpart casting a shadow over the whole film. The family beach day comes to an abrupt halt when Jason briefly ducks out of Adelaide’s eyesight, causing her to erupt into a panic. A mindless exchange with a liquor-happy family friend, Mrs. Tyler (Elisabeth Moss), turns sour when Adelaide tells her she just doesn’t want to talk. As we learn in flashback scenes, this is a direct callback to the aftermath of Adelaide’s funhouse horror, when she refused to speak after reuniting with her worried parents.

But Adelaide’s worst fears become reality that night. Her doppelgänger Red, now an adult, arrives on the doorstep with her matching family, all wearing red jumpsuits and distorted expressions, eager to take over the Wilson narrative through torment and murder. Their presence heralds an eerie global takeover, a world in which the worst-case scenario looks just like us—only more sinister. Their message is grim: What we think we know about ourselves, our values, and the world around us easily comes undone when what we’ve been told to fear the most—in this case, retribution—materializes before our very eyes in our mirror image, the most urgent way to reflect our intentions in a self-obsessed world. As Adelaide reckons with this reality, she is completely unhinged in a masterful performance from Nyong’o. The nightmare is set to the tune of Luniz’s hip-hop classic, “I Got 5 On It,” which goes from fun family sing-a-along at the beginning of the film to a creepy, slowed-down track that taunts each character by the climax. 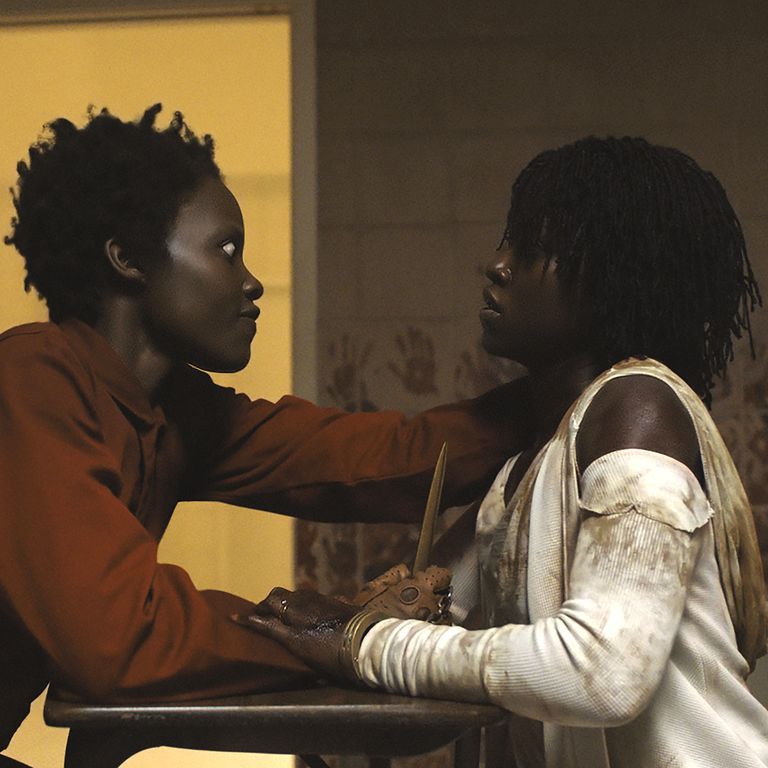 At the risk of divulging heavy spoilers, the third act of Us has a whole lot going on. There are a few straggling symbols—like Hands Across America and lab rabbits—that aren’t entirely effective in the story. Plus, the narrative’s most important explanations are told through Red, whose voice is so mangled and hoarse you can barely make out each word, rendering Peele’s takeaways occasionally confounding. Back when we first meet the twisted family at the Wilson vacation house, their silence begs all sorts of questions: Who are these monsters? What do they want? And most pressingly, what did the Wilsons do to deserve this? When Red finally does speak, it’s through barely-audible messages conveying very little substance. It happens again at another crucial point later in the film, when Adelaide is alone with her twin, trying to bargain for the sake of her family. Red is merciless, spewing contempt toward Adelaide and the life she’s lived, vitriol that doesn’t completely resonate because it’s hard to catch every word. Though we get the gist of it, with the increasingly frenzied narrative at this point in the film, every piece of dialogue is vital.

That aside, Us succeeds at fathoming a world devoid of faith, one where we’re still punished despite our best intentions—and according to that lingering Jeremiah verse, it’s inescapable. The movie preys upon what we most covet and visualizes a Judgment Day that is malignant and unforgiving. Regardless of where your faith lies, the movie is an unsettling tale that reminds us that at the end, we can no longer rely on ourselves or our preoccupations for redemption. But even as the central characters are enveloped by doom, Peele provides a haunting image of a black family that is both unsuspecting and frighteningly unfuckwithable.