What It’s Actually Like To Be Stalked by Joe 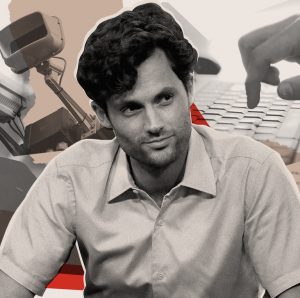 We met in person for the first time on the 12th floor of a chic Manhattan office building. I’m sure there were signs, subtle red flags that would have given me a glimpse into his perverse mind, but I missed them. I thought he was one of the good guys: an average, everyday Joe.

I had already known him for about a year. We worked on a remote team—me from New England and him from the South—for a large media company. Our first day in New York was blurred by nonstop introductions, meetings, and presentations. We didn’t really have an opportunity to talk one on one. So, when he asked me to dinner, I didn’t find it odd or presumptuous. I did, however, notice his immediate disappointment when I told him I had already made plans with a friend from Brooklyn. Feeling guilty, and not wanting to ditch him alone in the big city, I invited him along. I believe this is the moment when he mistook my kindness, my friendship, as a sign of interest. I opened a door in his delusional world—and it was one he had no intention of closing.

Netflix put a handsome face on You’s antagonist, Joe Goldberg, but let me tell you: there’s nothing sexy about a stalker, real or imagined. And much like Beck, the object of Joe’s obsession, who is cautioned by his ex-girlfriend Karen, I too was warned about my coworker. My desire to see the good in people—to pretend that monsters don’t exist—overshadowed the truth. At first, I was willfully ignorant.

Six months after our trip, Joe’s roommate, who also worked for the same company, sent me a strange email. “Joe isn’t who you think he is. Be careful,” he wrote.

Sometimes you don’t see what’s right in front of you.

I pushed the roommate for more information. He nervously backtracked, claiming he had sent the email during one of their frequent arguments. Sometimes you don’t see what’s right in front of you, and I convinced myself that this was an isolated incident. I was naïve. I deleted the emails and carried on as if this bizarre communication never happened.

From there, time trudged on. Six months or another year went by. I lost track of the moments. I call this chapter of my life starting over during chaos. I divorced and moved into a house that resembled Amityville. Right after moving, there were major personnel changes and restructuring at work. All this upheaval distracted me from what was unfolding: Joe’s frenzied preoccupation with every aspect of my life. I didn’t know it then, his roommate would later fill me in, but Joe had been monitoring my crumbling marriage and divorce, digging for information about my children, and saving photos I’d posted online to a personal collage on his computer. Unknowingly, I had become the object of his obsession.

One Friday evening, a thundering knock on the front door jolted my new boyfriend and I from an intimate moment on the couch. As I began putting my clothes back on, my boyfriend went to see who it was.

“Who the hell are you?” he demanded. I had never heard him raise his voice. Something was very wrong.

Joe had tracked down my address and showed up unannounced—all the way from across the country. And he was wearing a straitjacket, a costume, like it was Halloween. When I tell people this story, they often laugh. But the irony of this moment cannot be lost. Somewhere in the dark and twisted halls of his mind, Joe knew arriving at my house without warning, at 10 p.m. at night, was crazy. It appears he’d worn the straitjacket to admit that upfront. But if he ever had a second thought, it didn’t last long.’

“Joe had tracked down my address and showed up unannounced—all the way from across the country.”

At this point, seeing his roommate standing behind him, I was confused. Joe sensed my boyfriend’s animosity and, unprepared for the competition, stumbled over his words. “We were vacationing in New England and decided to surprise you,” he said. The roommate looked horrified. Still not connecting the dots, I invited them inside. We talked about work and some tourist hotspots along the East Coast. They stayed for about two hours. Before leaving, the roommate pulled me aside and apologized. He said he had tried talking Joe out of the trip and decided to join him last minute. “To keep an eye on things,” he confessed as Joe called for him outside.

Now, at last, a red flag waved in my face.

I called my boss and reported the incident. Since it happened outside of work, and I was not physically harmed, there was very little he could do. So, I confronted Joe. I made it clear that there was nothing between us and never would be. “Lighten up,” he joked, before reiterating the imaginary reason he had made the trip. In You, Joe gaslights Beck in much the same way. When she finally confronts him about his ex-girlfriend, Candace, whom Beck suspects Joe has murdered, Joe immediately laughs to downplay the situation.

A few weeks later, my coworker accepted a position at the home office and moved to New York. I believe he wanted to be closer to the East Coast—within driving distance of me. After displaying some erratic and hostile behavior, which management firmly addressed, he left the company and headed back South. I felt an instant sense of relief. The worry that had plagued me since his unannounced visit disappeared overnight. And then the first email arrived.

I opened the email expecting to find an apology or a goodbye. Something that gave him closure. Instead, Joe had scraped a photo off my blog and cropped my chest from the rest of the image. “This is what I fap to three times a day,” he wrote.

This was the first of countless emails he sent over a multi-year period. I’d receive anywhere from two to 20 a day. Some were desperate pleas for attention. Others were more explicit in nature. When I blocked one email account, he’d create another. Or he’d leave a comment on my blog or YouTube video. I had to ask friends, colleagues, and family members to block him on social media so he couldn’t see their public posts that contained mentions or photos of me. He also sent messages to my adult children and their girlfriends—begging them to talk with me, to convince me that he was the one. He found any means he could to try to get to me.

“When I blocked one email account, he’d create another.”

At first, I was filled with anger and hostility and I lashed out. I demanded him to stop. This kind of emotional reaction was exactly what he wanted. Engagement fueled him. He was desperate to keep our relationship going and still believed that my responses, no matter how abrupt or negative, meant I was interested.

Joe got off on taunting me. He often threatened to show up again in person. I monitored his Facebook page from a dummy account to keep tabs on where he was posting from, and if he was traveling. I became so fearful for my safety, and the safety of my children, that I strategically placed weapons at all entrances of our home. I hid a butcher knife on top of a painting that hung near the back door. I kept a baseball bat behind a large potted plant next to the front door. There were switchblades and scissors on top of all the windowsills. I had night vision hunting cameras installed near the driveway. I couldn’t be alone at night and had a difficult time focusing at work. I constantly looked over my shoulder. I can’t even describe the level of anxiety and dread that I felt every single day.

Even more so, I felt hopeless. I met with a lawyer and initially sent a cease and desist. Of course, Joe laughed that off. In order to have it enforced, we’d both have to appear in the same courtroom. I wasn’t about to give him that luxury. Because Joe and I lived in two different states, and much of this harassment occurred online, law enforcement was of little help. One department would pass me on to the next and the dominoes kept falling without any resolution. I contacted attorney generals in both states and the FBI, which was like navigating through a black hole with duct tape over your eyes.

I felt alone, consumed by hopelessness.

Joe took a heavy toll on my mental and physical wellbeing. So, one day, I made the conscious decision to write him out of my life. I stopped looking at his Facebook page. I deleted all my email accounts. I removed the weapons and cameras and opened the front door. I moved on.

For several years, I rarely thought about Joe. When he did cross my mind, I couldn’t imagine that he would still be fixated. He hadn’t shown up. He stopped posting on my blog and YouTube videos. There was no way he could contact me. I thought this nightmare was behind me. And then a former coworker, who was aware of the situation, sent me a warning. “I happened to look at Joe’s Facebook today. It’s been awhile, but he’s posting some pretty disturbing things about your daughter.”

My hands shook as I logged online. I felt a wave of nausea when his profile pulled up. There were hundreds of sexually suggestive posts using the name of my five-year-old daughter. Surely, this behavior crossed lines. It had to be enough to warrant police involvement—maybe even an arrest. Yet, once again, law enforcement did nothing. He wasn’t stating my daughter’s age. He wasn’t posting explicit photos of underage girls. In their opinion, there were no implied or immediate threats. The list of excuses piled up. I reached out to Facebook. I reported every single post that contained a reference to my daughter. In their many canned responses, they stated he had not violated any of their community standards. Today, I’m once again looking over my shoulder. I worry constantly about how this will affect my little girl if I cannot make Joe go away. I wonder when and if he will show up again. And, if he does, what the outcome will be—because, this time, I won’t back down.

As someone deeply affected by this intimate form of terrorism, I’ve closely followed actor Penn Badgley’s anti-Joe crusade, which began on Twitter. I’ve admired how Badgley has engaged with fans who claim Joe is sexy and beg to be kidnapped by this fictional character. At the same time, I’m disappointed that the greater context of this story has not been broached.

When Badgley posted an anti-Joe follow-up tweet, in which he said, “Ok, I think that’s enough about Joe for now,” I’d be lying if I didn’t say it felt like another door was being closed. A constructive conversation was underway, one I had hoped would branch off and tackle the realities of stalking. Because if I use my former coworker as a benchmark, there’s nothing particularly remarkable about stalkers. They aren’t outwardly suave or sophisticated. They don’t manage bookstores or melt you with rays of charisma. Often, they’re nothing like Joe, except they’re everything like him, if you look up the definition of stalking.