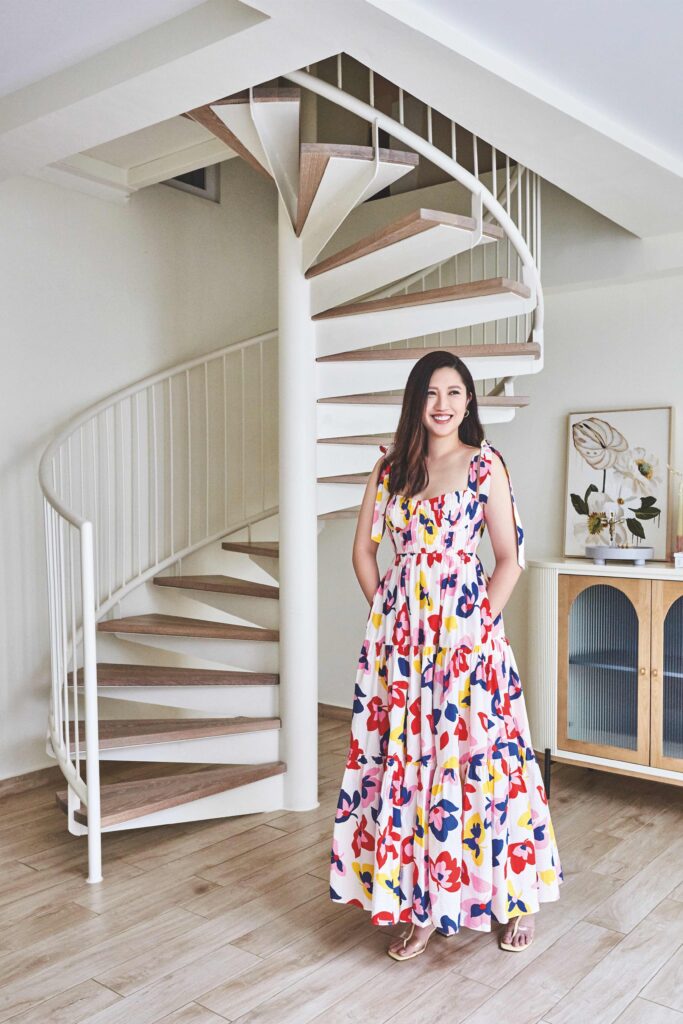 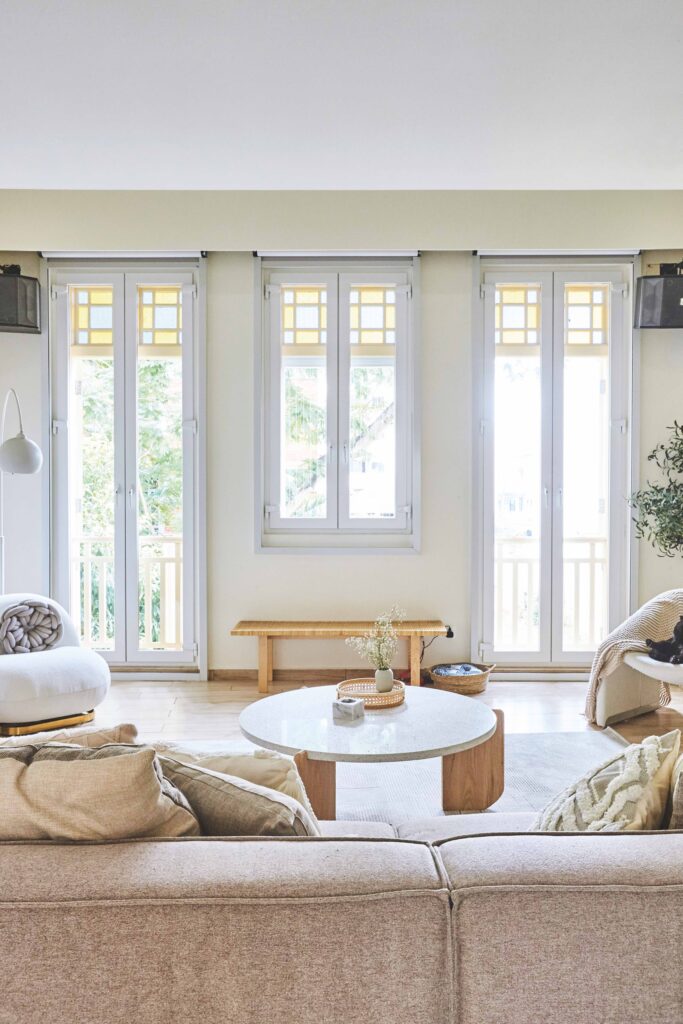 For wealth management advisor Hanni Wong and her banker husband Nigel, living in a shophouse has always been the dream. Inspired by the rows of shophouses opposite her then-boyfriend, now-husband’s penthouse apartment in the Joo Chiat area, the couple would often try to peek inside the houses. “I loved walking around the neighbourhood and seeing how these pre-war shophouses look as modern-day residences,” recalls Wong.

It was the juxtaposition of the old-world charm of the exteriors and modern interior designs that appealed to the couple. So when they got married in 2017 and the opportunity to purchase a shophouse came knocking on the door, both Wong and her husband wasted no time setting up a viewing appointment. 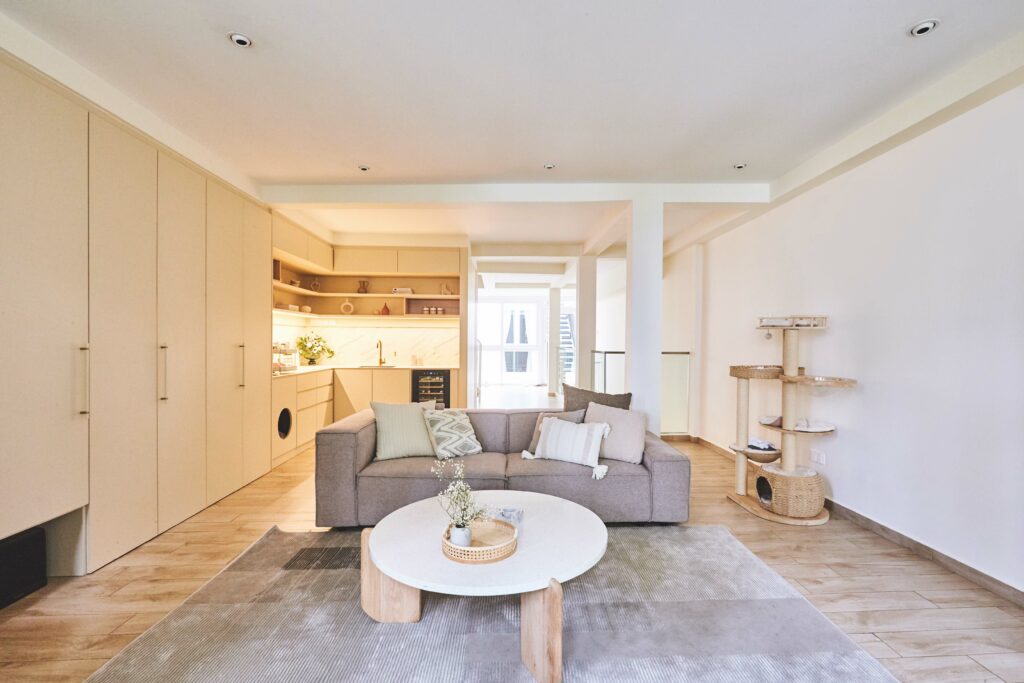 Walking into the east-side property for the first time, though, Wong was not impressed. The almost 3,500sqft three-storey shophouse, which was then just listed on the market, looked very rundown and was segmented into two separate units: The ground floor was rented out as a retail-cum-office space, while the upper two floors were rented out as an apartment.

“It was definitely not a love-at-first-sight moment for me, to be honest,” she says of the property. Scrolling through her phone to show the pre-renovation photos, the 35-year-old recalls how dark and dingy the space was. “There was no natural light coming in except from the two windows at the front.

It was in [such] a completely unliveable state that I wasn’t able to visualise how it could be a home for our family,” she says. Despite her reservations, the couple made an offer and, within days, were homeowners to a 100-year-old conservation shophouse. Wong asserts that while she was not a fan of the property then, she relented as her husband could see its potential. That was in 2018. Four years, a global pandemic that delayed renovation works, and a two-year-old son named Kyle later, the property looks nothing like it did before. 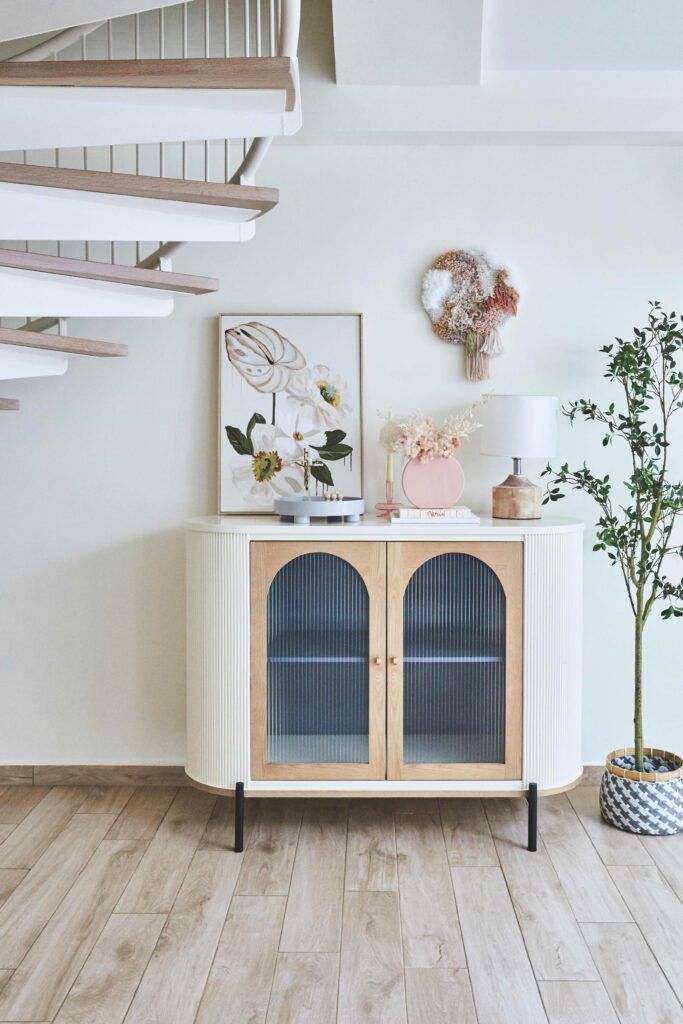 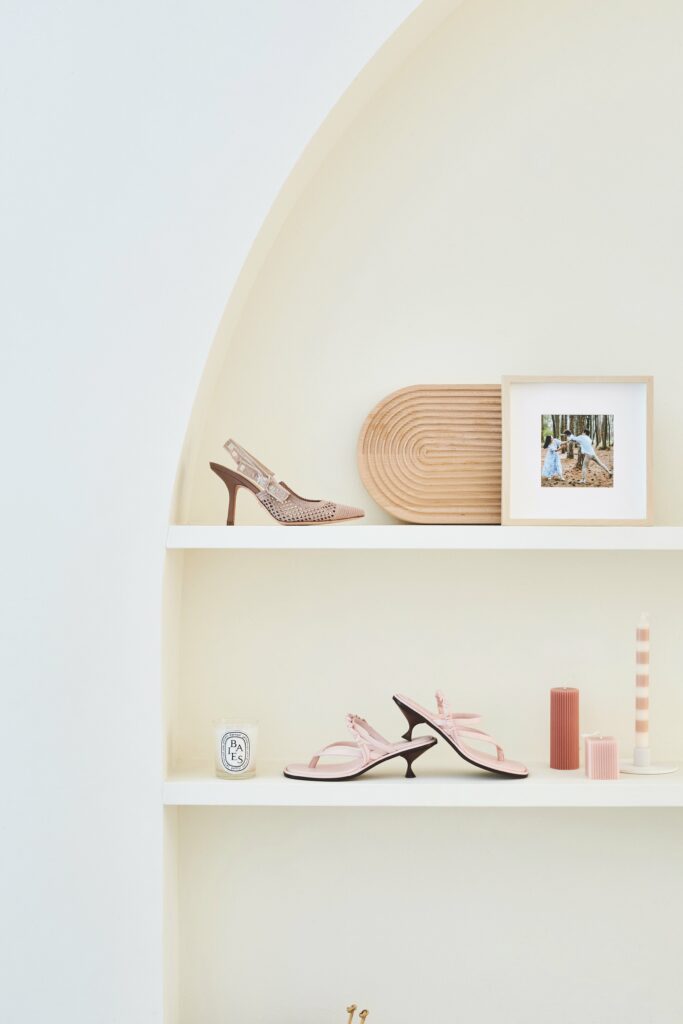 Today, barely a year since they moved into the property last September, the shophouse is a forever home for the couple, their son, as well as their helper and two adorable cats, Boba and Dumpling. It is now bright and airy, and Wong shares that she leaned towards a Japandi-inspired style when planning the interior living spaces. She further explains that it was the perfect combination of her love of smooth, modern lines as well as natural materials, befitting of the Scandinavian aesthetic, and her husband’s penchant for minimalist, functional elements that have come to define the Japanese‐Scandinavian interior style.

To ensure the house is bright, which she says is a stark departure from her husband’s mostly black and Brutalist-style bachelor pad penthouse, she opted for neutral hues, whites and soft pastel tones. On the white walls, textured artworks as well as family photos and various home décor pieces––all in neutral tones with house reflects light to brighten up the space. If I could find a white fridge, oven and wine chiller, I would have those as well,” she says, chuckling at the thought. 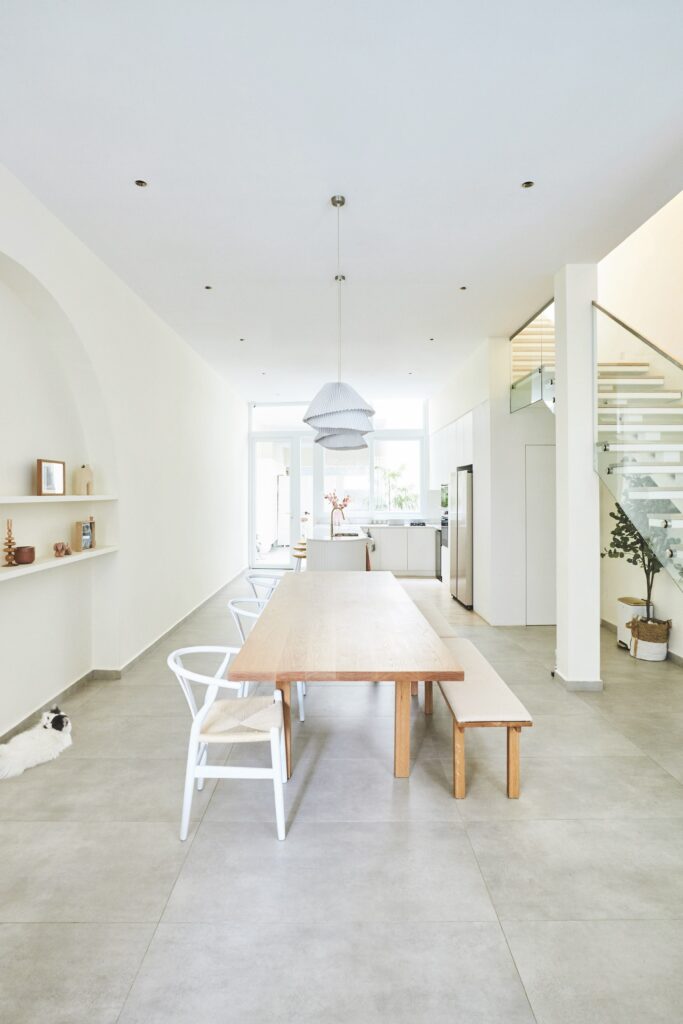 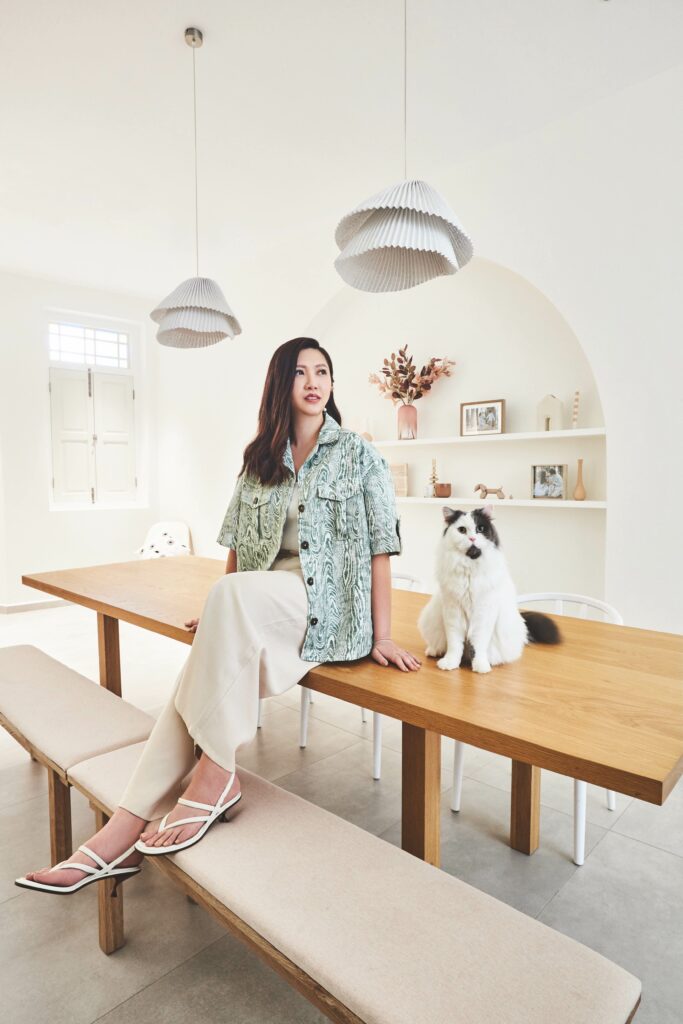 The main door opens to a bespoke 10-seater dining table placed in the centre of the roughly 1,100sqft first level. Crafted from American oak wood, it was custom-designed by Singapore-based German furniture maker Till Kautz. Two Arturo Álvarez pendant lights from Sol Luminaire hang above the simple, handsome table, anchoring it as the focal point of the house. Walking through the space towards the kitchen, one gets the feeling that this is a space made for hosting.

Indeed, Wong shares that it is something the couple does often, and a solid, nearly 1m-long table was something she always wanted, especially in such a room. “I really like hosting dinners, and before the restrictions were lifted and we could all go out to restaurants to eat, private home dinners were a thing. I wanted to keep it up, so it was really important for me to have a space that is conducive for such events,” she expounds.

Towards the back of the house, where the car garage used to be, an airwell punches through the three floors of the property, instantly opening up the area to natural elements and, more importantly, allowing for more sunlight to enter and fill the interior. “Because the house is long and somewhat narrow, I wanted to break the look,” she explains. “We partitioned the space with glass panels such that it creates an outdoor area within the compound of the shophouse.” 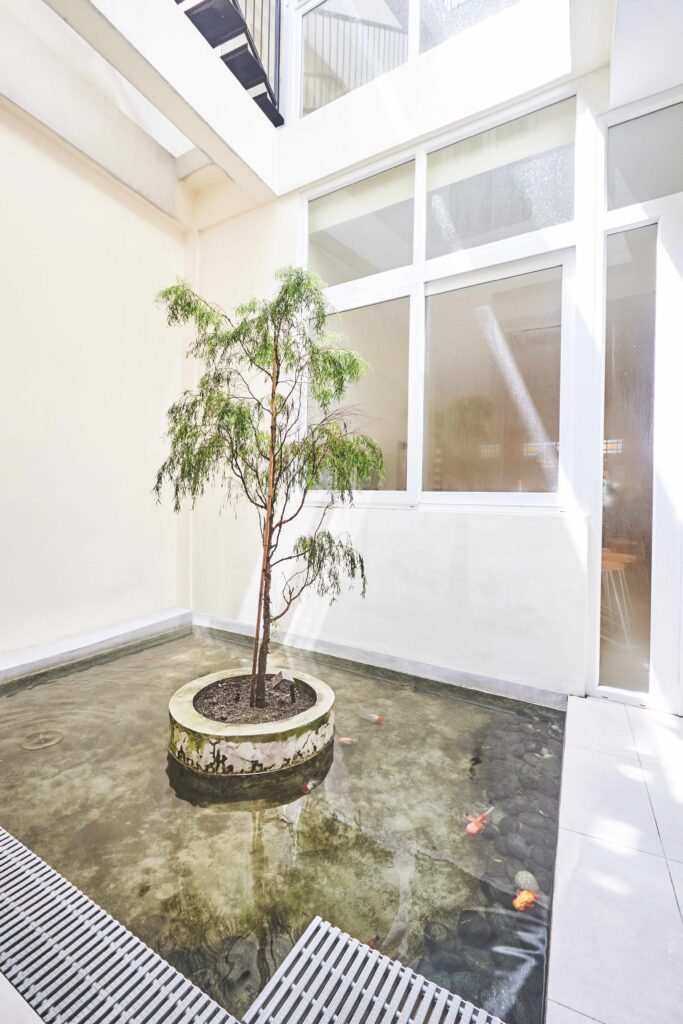 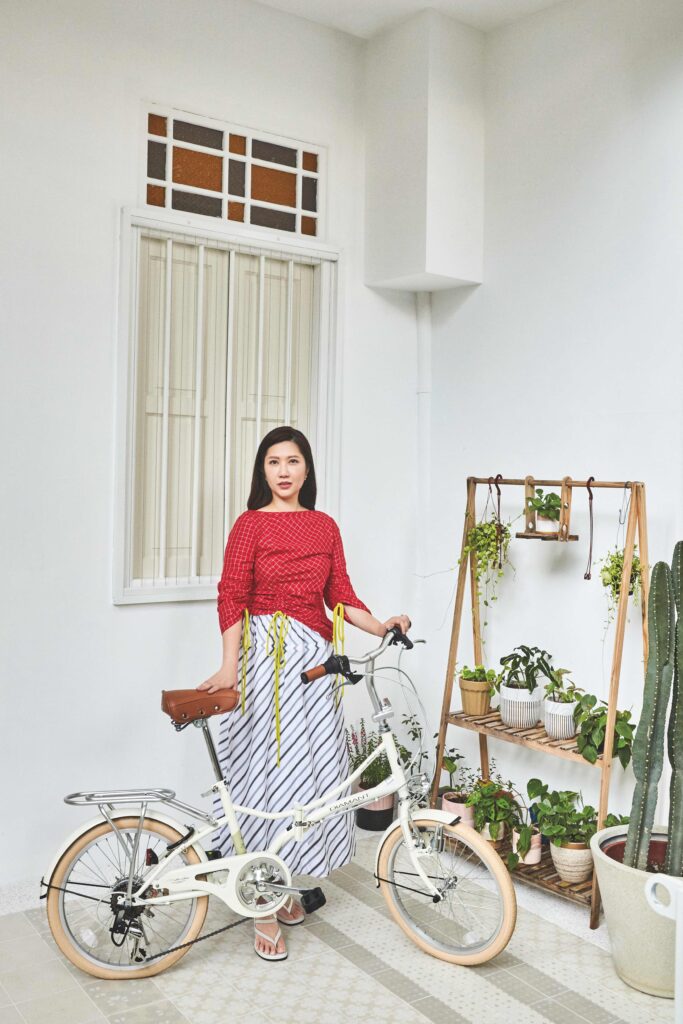 To complete the look, she chose to have a goldfish pond at the bottom of the airwell, with a weeping willow tree–just tall enough for its leaves to be seen through the floor-to-ceiling glass panels from the dining table–as the centrepiece. It is an oasis of calm Wong really enjoys. “It makes the house look more spacious, as you can see greenery without having to leave it,” she notes.

Tucked away from the oftentimes busy main hosting ground, the living room sits on the second floor of the shophouse. It is an area, Wong says, where they gather to relax after a long day at work. Here, an automated projector screen comes having a quiet moment with down to cover the windows when the family gets together for movie.

A small built-in pantry with an attached bathroom completes the space as an all‐encompassing family. She adds: “My son’s room is also on this level, so it’s convenient to have a place where we’re not too far away from him, and we can get his snacks, double sinks, located just under the slanted rooftop of the shophouse. “I call this area the Harry Potter space, as it’s not high enough for any of us to walk into comfortably,” says Wong of the space that has been partitioned into a mini storage area as well as a mini bathroom for Boba and Dumpling. 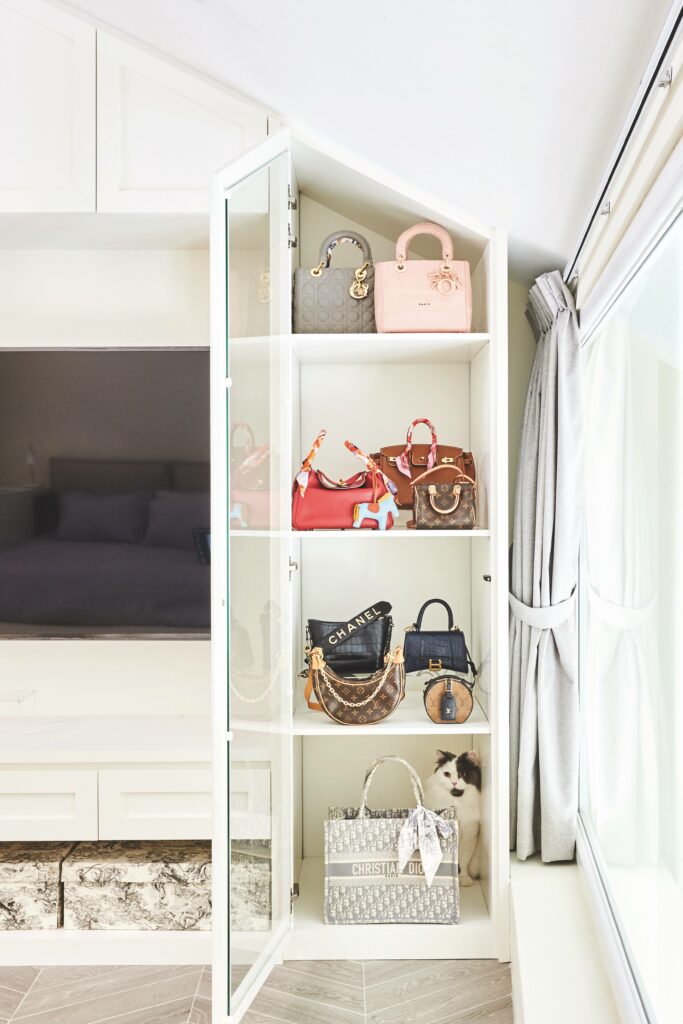 When asked about the couple’s sense of dressing, Wong shares that both of them wear mostly neutral and pastel-hued pieces, with pops of colour mainly reserved for accessories and bags as accents. “We lean towards classic and timeless looks, with touches of trendy pieces, and this house is the perfect balance of that, right down to the colours and pieces we’ve chosen,” she states. “We like to have a good base and then build on it.”

Definitely a good philosophy to hold on to. Looking around the shophouse, it is clear that it has guided the couple in the design of the house. And while it is already a beautiful home, the couple is not done yet. As Wong puts it: “It’s a forever home for us, so we’re still filling up the space with things that are not only aesthetically pleasing, but also mean a lot to us. Nigel tells me that we should take our time and see what’s needed, and that’s always good. Everything should come together and tell a story.”

This article originally appeared in the December 2022 issue of Harper’s BAZAAR Malaysia.