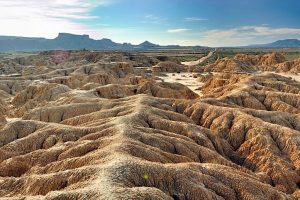 Easily mistaken for another planet, this fascinating desert was where Daenerys crossed the Dothraki Sea on her path to the throne. Bardenas Reales is a combination of clay, chalk and sandstone that formed an unusual landscape over centuries.

Make the alluring beach town of San Sebastian your base, with its golden sands, top-notch culinary scene (both Michelin-starred dining and pintxos bar hopping are musts) and upscale boutiques. The only hotel you’ll want to check into for its sparkling chandeliers, huge portraits and lavish bedrooms is the belle epoque Maria Cristina. Book directly with marriot.com or visit ba.com for flights and a stay.