Penang is the geographical truth that history, culture, and modernity can exist rather marvellously on every street. This is no truer than when we turn into Lebuh Leith, named after the first lieutenant-governor of Prince of Wales Island, where many wealthy Hakka tycoons built their homes in the early 20th century. Here, the famous Blue Mansion contrastingly jostles the massive Red Garden, a neon-lit, karaoke-loud hawker paradise, as mamak warungs boil up storms of sup torpedo at the end. In the middle of this cultural melee, down a driveway curiously encircling a chinoiserie-kitsch fountain of spouting dragons, handsomely stands the chic heritage hotel The Edison George Town.

The colonial-style mansion of decorative frescoes, cast-iron columns, and central courtyard was built in 1906 for a wealthy tycoon, Yeo Wee Gark, by the British architect David Nathaniel. It was turned into the budget Cathay Hotel after World War II, and was refurbished in the ’60s, but not until 2014 was major restoration work taken on by its new owner ET Group to transform it into the bijoux heritage hotel that reopened in mid-2016 as part of the UNESCO World Heritage Site, George Town. It took a lot for them to get it just right, from a conservation, community, and historic standpoint, but extraordinarily so that it was swiftly anointed Penang’s first Small Luxury Hotel of the World (SLH).

The Lounge, made for sumptous breakfast spreads, pre-dinner drinks, and good times

Much of its original form was kept thoughtfully intact, right to the tiled floors, charming window frames, and antique doors that unfortunately do not keep the midnight karaoke cacophony from across the street from creeping in. But you’d be happily ensconced in one of the 35 ultra-spacious high-ceiling rooms, asleep in the plush luxury-hotel-quality beds—bless them for leaving earplugs bedside; or out imbibing on street delicacies to even notice. Anyway, all part of the island sights and sounds …

All the luxuries in one stay

Being all 20th-century-historical-meets-21st-century-design, the décor combines Art Deco antiques with cool colour pops, and yet keeps it all intimate and interesting. The Lounge, a convivial communal space that serves breakfast, all-day snacks, and drinks—think old-school ice gems, haw flakes, ear biscuits—as well as everyone’s favourite wine-and-cheese hour, is the social heart of the hotel. Pop out the back gate that takes you straight to Love Lane, Muntri Mews, and Chulia Street for your street-food fix—it’s that central. In the cool evenings, find some respite at The Pool, an Instagrammy spot for sure, or the cabanas that imbue the resort chill of the island paradise. 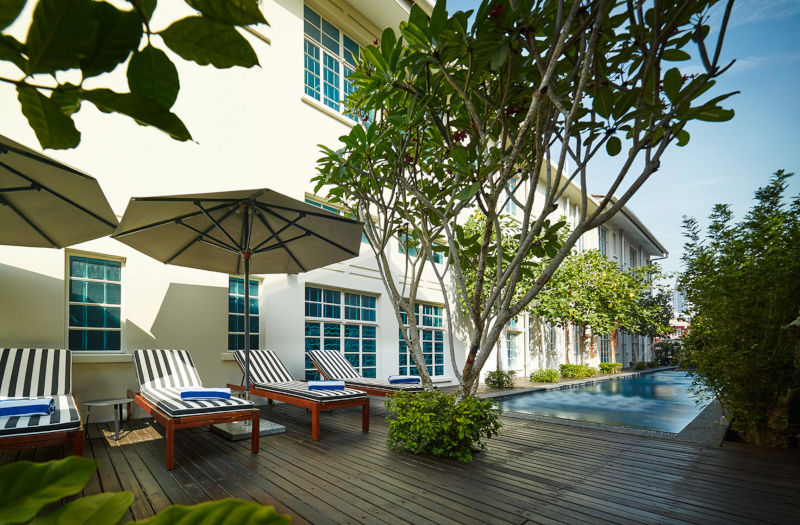 The Pool, prime for lounging, sunbathing, and refreshing dips

Beauty Buzz
Every so often, a girl needs a red lipstick that will glide on like a dream to stay sane.

Celebrity Watch
See 27 looks that show the German actress is quite the futurist.

Beauty Buzz
This soothing, non-invasive treatment gives you all the benefits minus the pain.
Type keyword(s) and press Enter
WordPress Lightbox Plugin