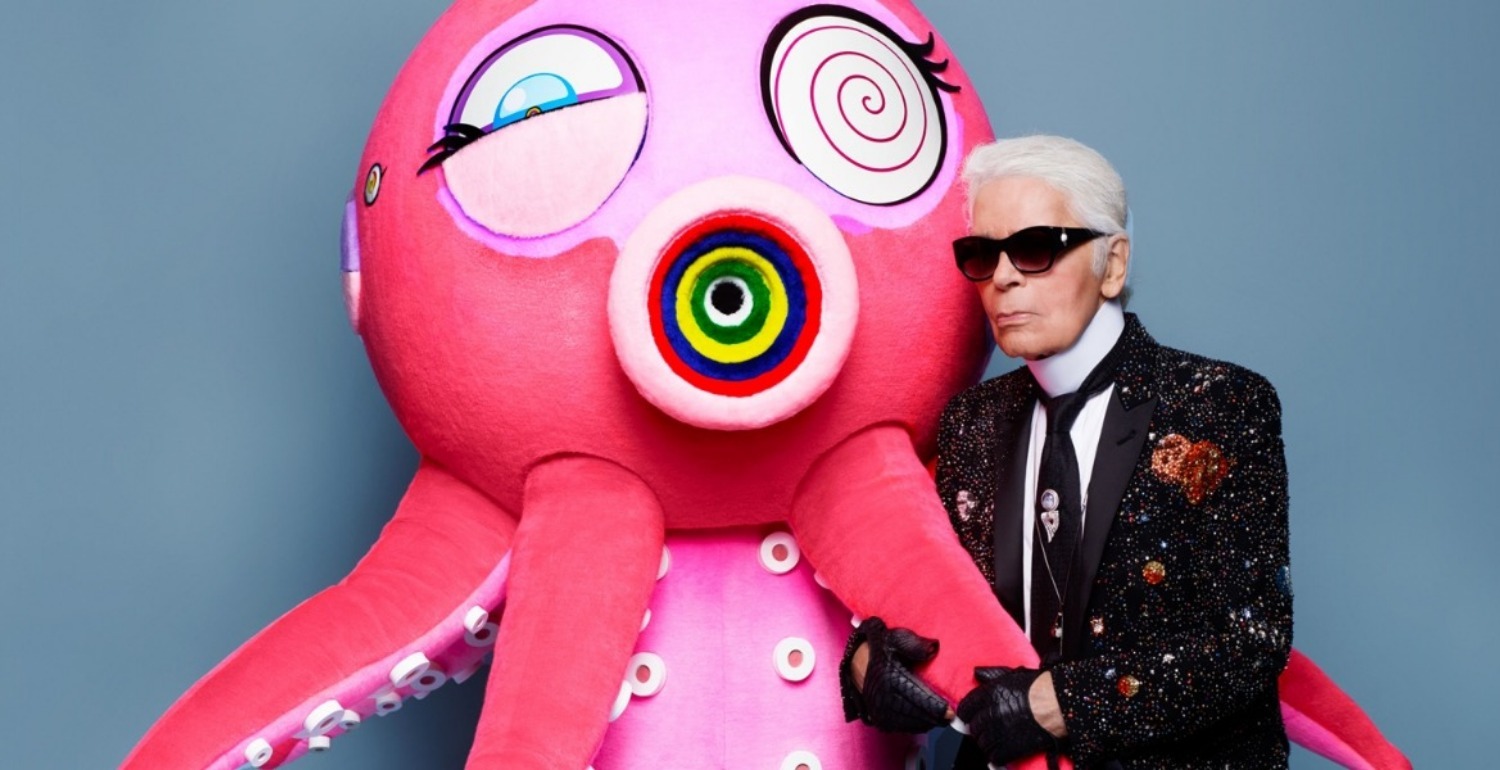 I love Murakami’s octopus character, Taco 7, because it’s just so funny. Although I’ve never actually met Takashi, I think he’s a wonderful artist. And if he’s anything like what he expresses in his art, I’m sure we would get along.

But am I like his octopus that eats its own leg in order to survive? In some ways, I guess. I have survived in the world pretty well, but that is mostly because I’m lucky. I have lifelong contracts at two billion-dollar companies, Fendi and Chanel, which gives me a level of freedom that—let’s be honest—nobody else in fashion really has.

So I don’t have any sort of feeling that I need to survive; I don’t feel like life is a struggle. And who wants to hear about other people’s suffering anyway? If a designer suffers or not is nobody else’s business. We make fashion—something that’s supposed to make people happy. We’re not selling our problems or our personal dramas.

I’m often asked how I do what I do—how I juggle so many things at the same time, like an octopus—but it’s totally normal to me. In fact, I think maybe it’s other people who have the problem. Designers today, they get big very quickly, and then their heads get big too. Suddenly, they think they’re more important than their label, and that is just not true. I’ve always known that I am me, and that Fendi is Fendi, that Chanel is Chanel. And so I’m very much against this trend of designers putting their names next to their labels. You know, “this and this for that and that.” I don’t have to put my name next to Fendi or Chanel. If a collection is good, people will know who made it. And if it’s not so good? Maybe it’s better that they don’t know. People should really think about these things.

Of course, I don’t have tentacles like an octopus, but if I did they would be my teams. I’m very nice to people I work with, which—especially in fashion—is not always the case. But I can’t do what I do alone, and I need something from everybody. The only thing I know how to do is sketch and come up with a few ideas, but for the rest of it, I need help. Thankfully, I’m lucky to have the best—nobody reallly leaves, and the two or three people that have tried have all come back. Most of them have never worked for anyone else. They started with me when they were 18, and now they’re 50. It’s quite funny how that happens. So my teams are very precious, like family.

If there is a secret to my success, it’s that I have absolutely no problem with myself.

Admittedly, it probably doesn’t hurt that I’m very much into paying people well and hate people who don’t. I want everyone who works for me to have a nice, beautiful life, and—sorry!—a nice beautiful life is expensive. There might be a song that says, “The best things in life are free”, but no. No, they are not.

At Chanel, I have a girl who has worked with me for nearly 30 years who is the go-between with all the ateliers and the people who make embroidery. She is a huge help, and I have someone similar in every department—for the handbags, the shoes, the jewellery, the leather, the jeans, all of it. I mostly work with girls, and if I’m not doing too many men’s collections, I prefer to have girls around me. I don’t know why that is, but it is.

It would be too easy for me to be mean and talk badly to my employees. I would never do that because it’s boring. In any case, I don’t ever have to get angry because they do things exactly the way I think they should be done. We’re all on the same wavelength.

Another way I am perhaps like an octopus is that I’m very curious. I want to know everything and see everything. The most important thing for me is having the freedom to explore ideas and try new things. I don’t even work for money anymore. To me, freedom is the pinnacle of luxury.

I’ve had enough houses in my life. The place where I live in Paris, for instance, is very, very nice, but nobody ever comes here. Only Choupette, my famous cat, my private secretary, my personal maid, and my cook, who brings the food, which is made in a house next door. That’s it.

To maintain my freedom I have a very special way of working. When I wake up each morning—after reading the newspapers, because one has to be informed—it’s up to me to decide when I sketch, when I don’t sketch, and what else I’m doing that day. Most days, I want to be alone. I’m a pretty good sketch artist, but on paper only, because I don’t use computers. In fact, I wanted to be an illustrator and a cartoonist when I was younger, which I still do once a month on my cartoon page in Germany’s biggest daily newspaper. My political ones are very mean. 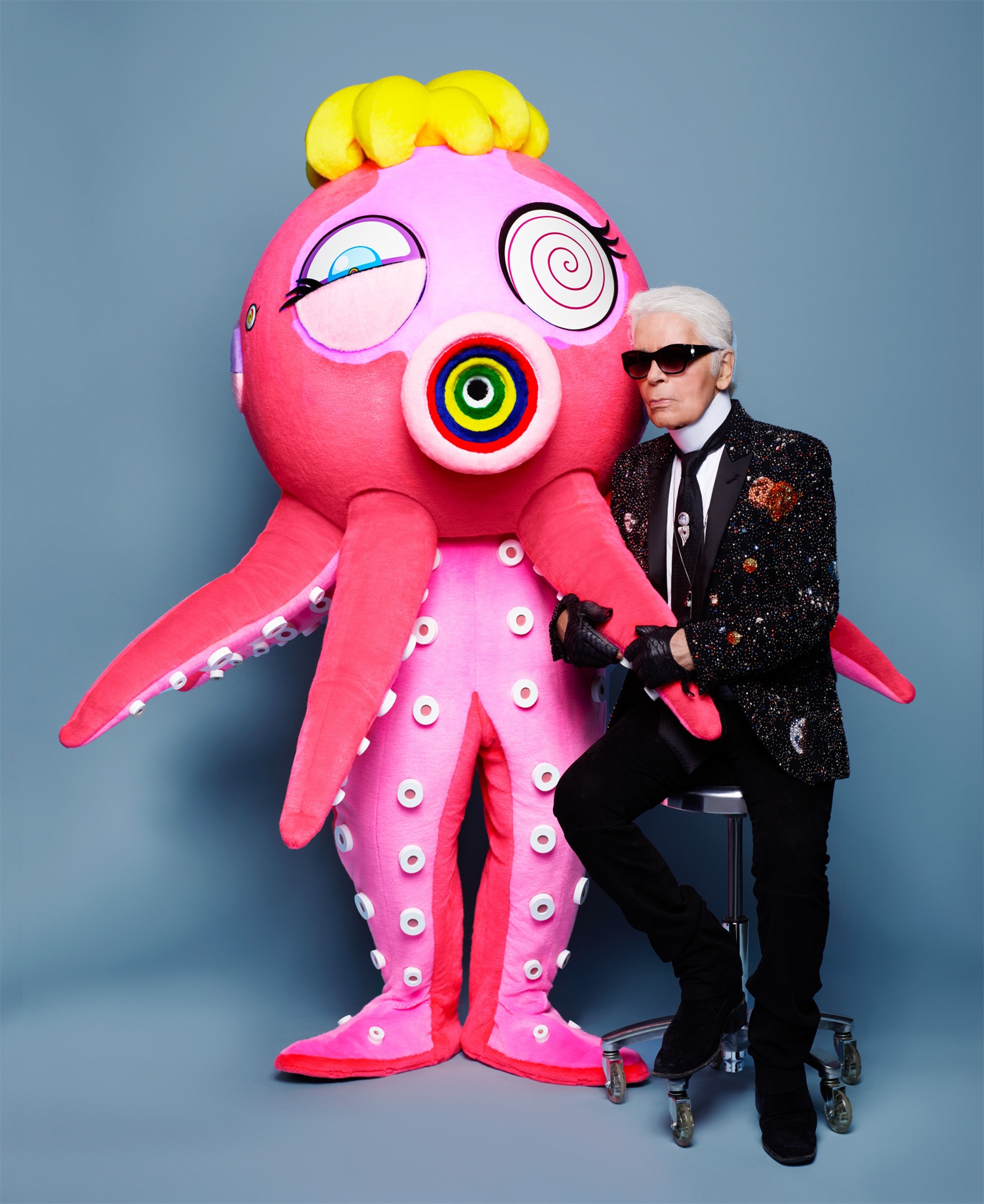 Karl Lagerfeld with Taco 7, a character from Takashi Murakami’s travelling exhibition ‘The Octopus Eats Its Own Leg’

A lot of my sketches go straight into the bin, but this is a healthy attitude to have. When I’m happy with one, I’ll have it sent to the studio so they can print it out and start working right away. I include all the technical details so my team hardly ever has to ask me any questions. I’m also very quick. I’m not standing around for hours asking myself if a button is right or not, like some other people do to try and justify their big salaries. I couldn’t do what I do if I were slow. I’m a perfectionist, but that doesn’t mean I take 100 hours to do something.

The trick is to think beforehand about what you want to do, and how you want it to be done, and then I always remember the famous line by Lady Mendl, from when she was an interior designer. When she did the interiors of what is now the Frick Collection, she presented her proposal to Mr. Frick, who said, “Yes, it’s very good. I like it. Do you have another idea?” And she said, “No! There is no second option!” It’s up to me to think about things and then present the final option. Like the Frank Sinatra song, I do it my way.

I do all my sketching at home because in the studio there’s too much going on—too much conversation, too many phone calls, too many people. I can’t concentrate. At home, it’s just me and my sketch pad with Choupette sitting next to me.

I don’t use references because it’s all in my mind. I have a very good visual memory—maybe even photographic. I think it’s sad when designers are too much into the past, or get stuck in their own archive. Your job is not to remind people what you did. What’s important is what you’re doing right now.

I don’t do meetings, and wouldn’t do them for anything in the world. I never have and never will. I don’t do any marketing things either, other than photograph the campaigns. Nobody tells me what to do, really. It wasn’t always like this for me, of course, but that’s how it has developed over the years. Back in my Chloé days, the world was so different. I couldn’t have possibly worked this way 20 years ago.

I wish I had some advice to give to the younger generation, but I don’t, other than to work hard and to find the right clients. Also, be careful not to overestimate yourself. Don’t think you’re more important than the brand. But everybody has to find his or her own way, and what works for me probably wouldn’t work for Alessandro Michele, who I think is great, or Jonathan Anderson.

If there is a secret to my success, it’s that I have absolutely no problem with myself. It’s almost like I have a kind of indifference as far as I’m concerned. I’m an expert at forgetting my problems, if that makes sense, and care more about other people’s. Who knows? Maybe I did once eat my own leg. There’s that wonderful Billie Holiday line, “It’s easy to remember but so hard to forget,” but for me, it’s reversed—things are hard to remember and easy to forget. It’s a very funny and very pleasant way to live.

Fashion News
Chanel proves itself to be the saviour of Savoir-Faire season after season.
Type keyword(s) and press Enter
WordPress Lightbox Plugin