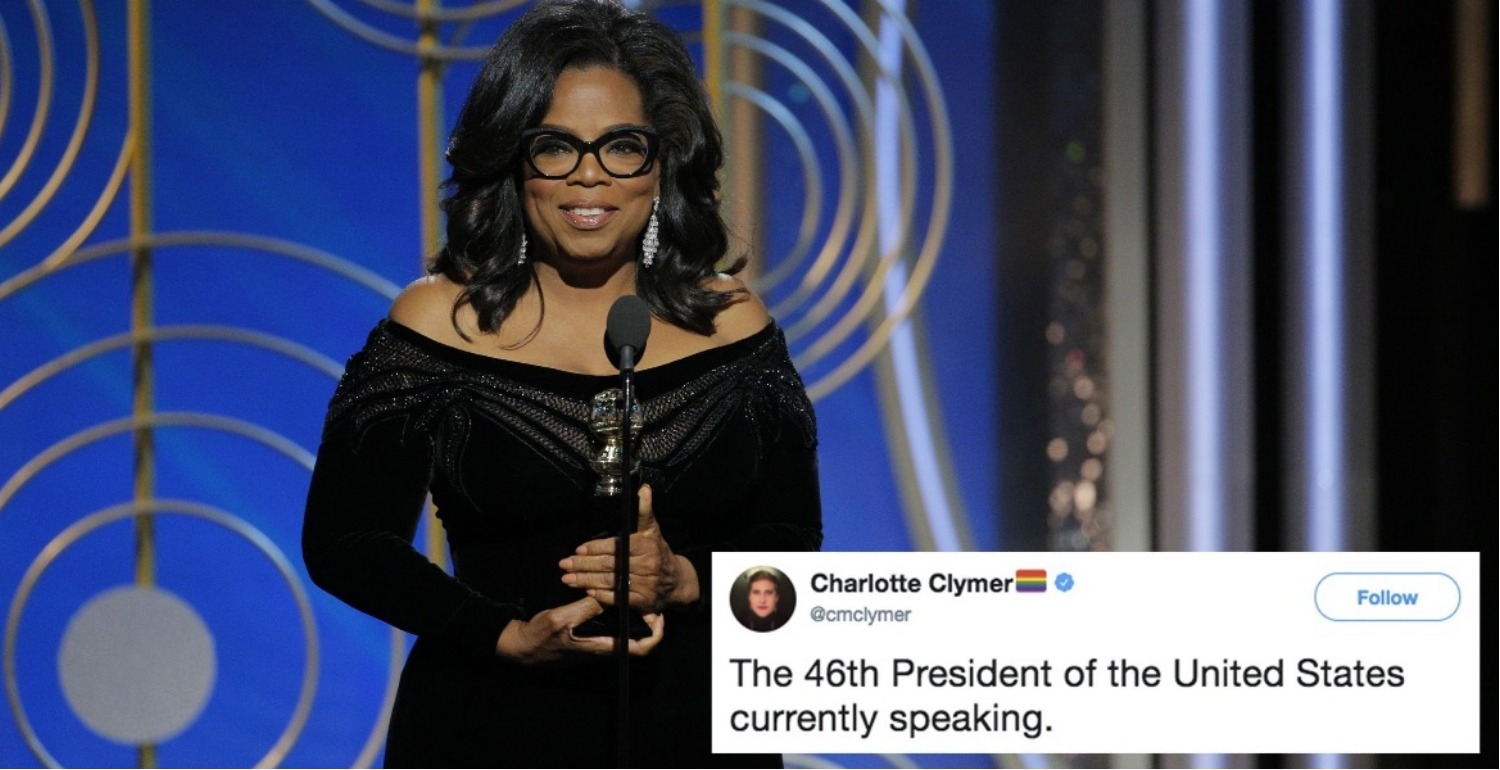 Oprah Winfrey just dropped the mic with the most powerful speech of the night (and of the whole year, so far) while accepting the Cecil B. DeMille Award at the Golden Globes. The mogul and film star addressed race, politics, and the #MeToo movement in her classic, electrifying Oprah fashion.

“So I want all the girls watching here, now, to know that a new day is on the horizon!” she said at the end of her speech. “And when that new day finally dawns, it will be because of a lot of magnificent women, many of whom are right here in this room tonight, and some pretty phenomenal men, fighting hard to make sure that they become the leaders who take us to the time when nobody ever has to say ‘Me too’ again.”

Audience members responded with genuine praise, applauding Winfrey’s words and responding with a standing ovation. (We wouldn’t be surprised if they shed a few tears as well.) But the celebration didn’t end there. Home viewers and fans online responded to Oprah’s speech with the best Twitter reactions.

I’m so inspired I don’t know how to function. #OPRAH

2018 mood: the love and respect oprah inspires in other women pic.twitter.com/rhl5qJAQ0K

The viewers were very emotional.

Everybody still trying to recover from Oprah’s sermon like pic.twitter.com/yXjkUkRqeP

They were simply stunned by her presence.

#Oprah at the #GoldenGlobes… pic.twitter.com/2Ogg4DByRR

Let me tell you this room is still vibrating like electricity from that speech. #OPRAH #micdrop #TimesUp #MeToo #GoldenGlobes

#Oprah just made all the men in Hollywood utterly terrified.

I feel like I just went to church, a political rally, a networking event and a bestie sleepover all at once #OPRAH #OPRAH #OPRAH

Leave it to a black woman to give the only speech that matters. #GoldenGlobes

personally, i feel that oprah is the only person that has ever earned a lifetime achievement award

When everyone else said “Time’s up” tn it sounded like vanilla haagen-dazs, when Oprah says “Time’s up” I swore I heard a thunder clap

Can we all agree that .@Oprah deserves a planet named after her.

Oprah sits cross-legged on a large, flat rock, many light-years away, watching twin suns set from atop a mountain on a distant planet.

And, most importantly, some compared her words to a presidential speech. (Oprah 2020?)

I know it was a joke before, but…we gonna get this Winfrey 2020 thing crackin or nah? #Oprah #GoldenGlobes pic.twitter.com/m2vFA74Khr

Oprah Winfrey is giving her State of the Union address at the Golden Globes. #GoldenGlobes #Oprah

#Oprah can straight up make this her first speech announcing that she’s running for President in 2020.

When Oprah is speaking at the Golden Globes and your goals shift to VP… pic.twitter.com/3ghEVMmCwF

OPRAH FOR PRESIDENT NOW. I DON’T WANT TO WAIT UNTIL 2020.

Witness her full acceptance speech below, and read the full transcript here.

Staying In
It is time to break down sustainability in the stay-at-home age.