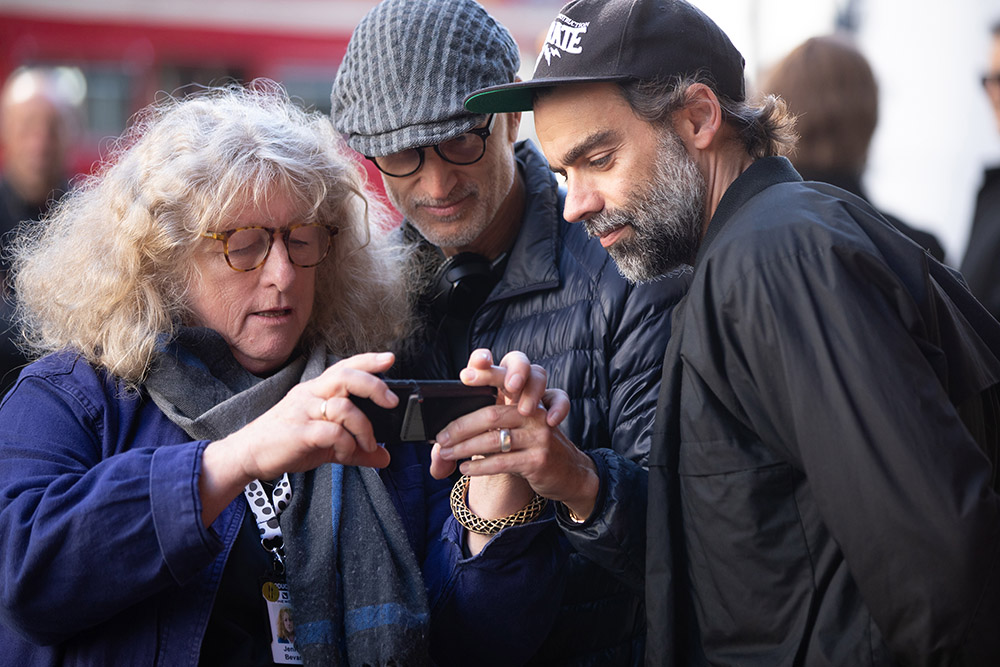 Disney’s latest live action film puts the spotlight on one of Disney’s most notorious and fashionable villains of all time—the legendary Cruella De Vil. The origin story, Cruella, stars Emma Stone as the fashionably talented and independent Estella, who navigates her way through life in 1970s London.  As the story develops, Estella meets her nemesis, The Baroness (played by Emma Thompson), and evolves into the fiendishly stylish and ruthless Cruella De Vil, who is hell-bent on avenging her mother’s murder. To create the film’s astounding costumes, the filmmakers tapped two-time Academy Award® winning costume designer, Jenny Beavan, who took home Best Costume Design for A Room with a View and Mad Max: Fury Road. In this exclusive interview with BAZAAR, we speak to Beavan about the design process and her favourite costumes from the film.

For this movie, the characters are quite complex and so is the setting—there’s ‘70s London and there’s that fantasy element as well. How long did it take you to bring everything together?

You work from the script (from the director’s vision) and that gives you the clues. I have to be honest, we didn’t have much time and you actually physically can’t do everything on day one. We literally had 10 weeks when I took the project on and when you’re filming, you’ve got many things to consider—you’ve got the filming time, you’ve got a schedule, and basically, you’re working to that first week of the schedule, and then you’re trying to make things in the right order. Although, we got an extra six weeks because Emma Stone had an accident with her shoulder, which I blessed her for, because it gave us an extra six weeks, and by that time, we were getting on really well and fast, so it was fantastic to have a bit more time, but it’s a funny odd process. 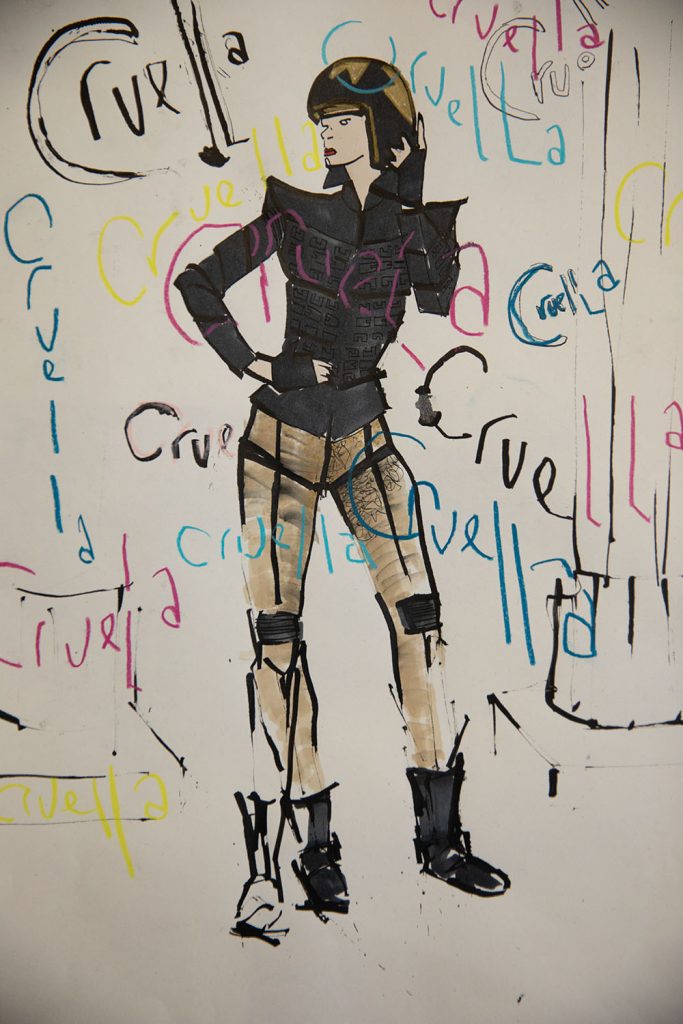 You mentioned that it was important for Cruella to be black, white, grey and red. Why is that?

It’s just Cruella’s colours, you know. From the animation and everything … it just feels right. There was a lot of black and red that was used very specifically, particularly for that red dress. But the black and white image that burns in your memory is just Cruella. I don’t know what else we would dress Cruella in. We can’t put her in yellow—it’s just not a Cruella colour! I think things just happen because they are right or meant to be.

Was it easier designing The Baroness’ costumes?

In some ways, I guess it probably was because she stays the same. She is who she is. She’s got a great silhouette, she’s The Baroness! I have the most phenomenal pattern cutter Jane Law, whom I’ve worked with a lot, and we just developed a real style for The Baronness. We could sort of throw fabric at the stand and drape with it. We knew we needed sculptural fabrics so they held shape and gave her that sort of empowering position in life through clothes, but yes, she was more straightforward … she was more clear. Cruella has such changes as she goes from a rebellious kid to quite a stylish designer. 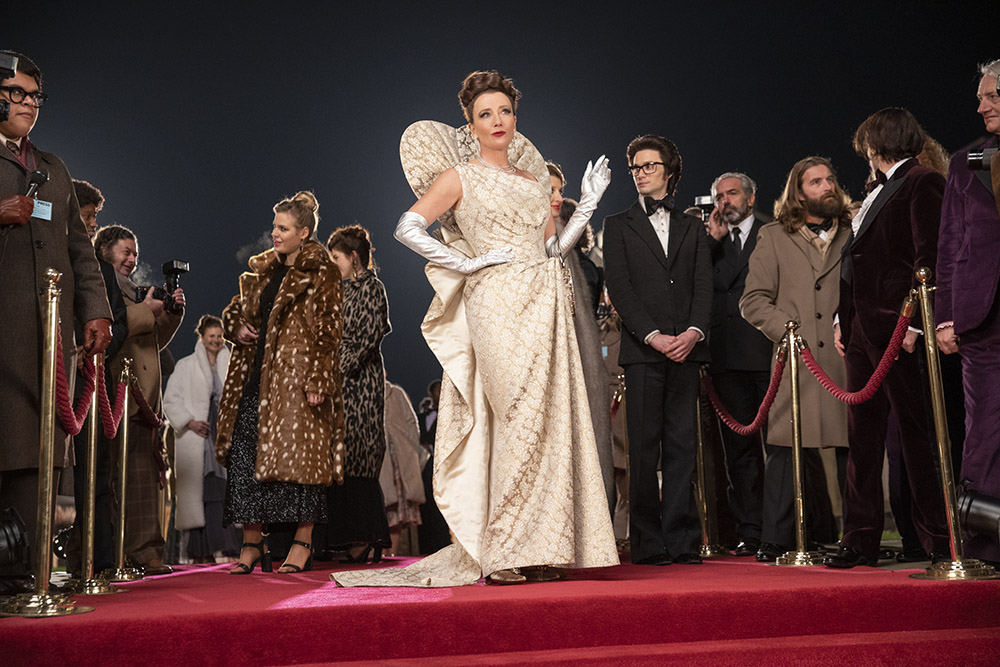 What are your favourite outfits for the two main characters (Cruella and The Baroness), and is there a particular scene you enjoyed designing?

I enjoyed designing a huge amount of it. No, I don’t really have any favourites to be honest. It was just a joy to have that opportunity. It wasn’t all easy. I don’t really think I sailed through it by any means but there were moments when it was just such fun. I like that big red dress with the red skirt and the dress she wears when she comes out of the dumpster truck. To see them all over floor in the workroom at Shepperton was quite fun really; just ridiculous! 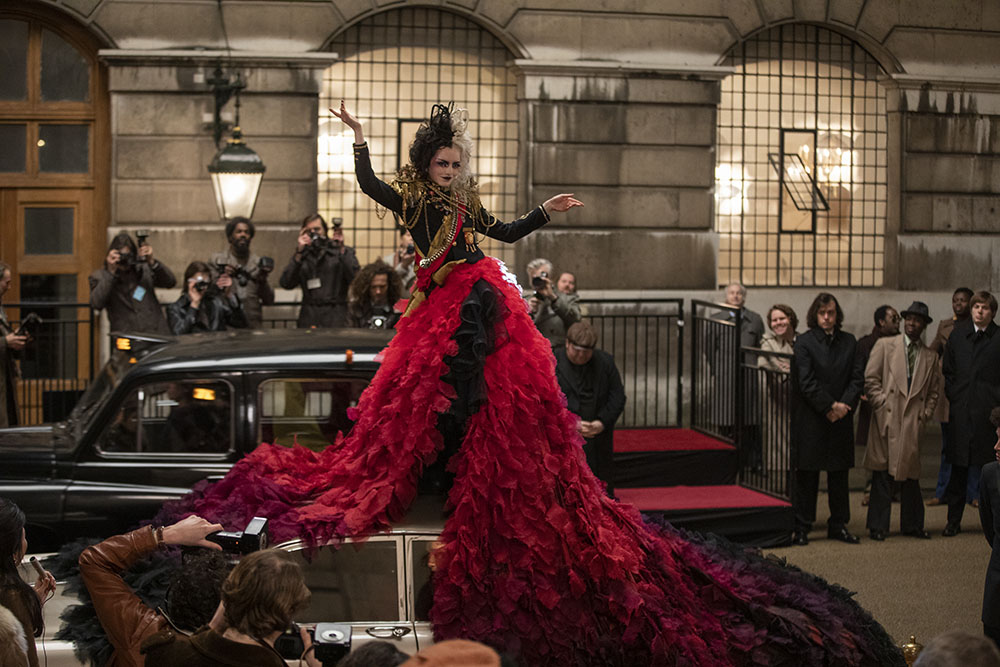 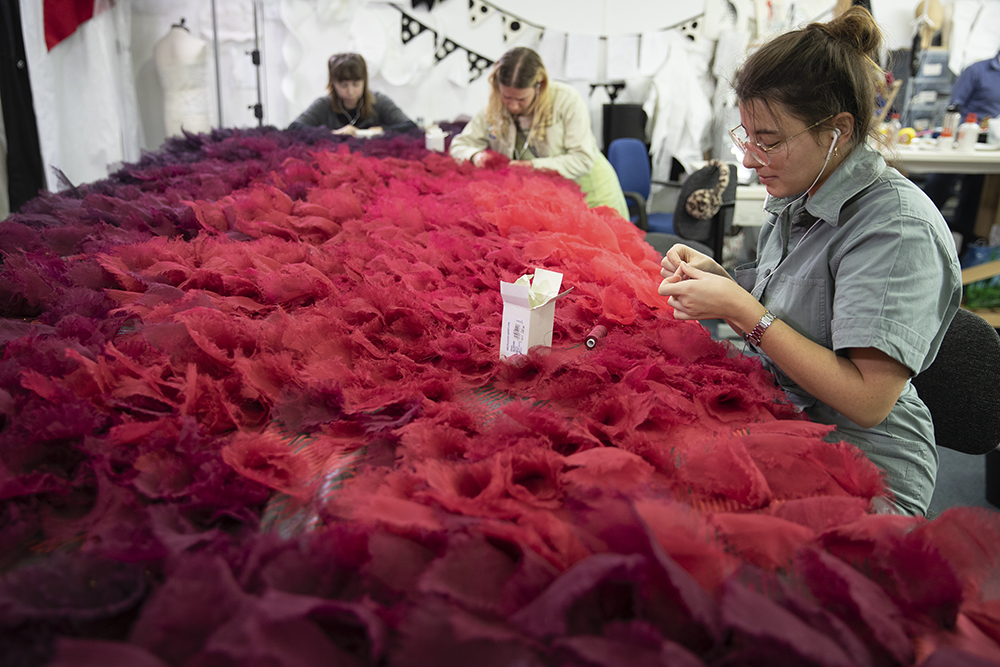 The dumpster truck dress was one of my favourite looks. Please tell us how long it took you to create that dress and what was the inspiration?

Yes, The Baroness’ 1967 spring collection! The newspaper is covered with headlines about The Baroness and Cruella, so that’s all got relevance. I love to say I made that dress, but I didn’t. Our wonderful pattern cutter, Kirsten Fletcher, who is part of my team, organised the whole thing with her gang of terrific seamstresses, and that was made by all of us at Shepperton. We were all in this wonderful big space; I could go around the workroom at any moment of the day and see everything that was going on, so I was very much involved but I didn’t actually wield a pair of scissors myself or a needle, sadly.

Emma Stone’s character is a designer, like yourself. Did you see a little of yourself in the character, and did that influence your design at all?

No, not at all. She’s a fashion designer and I’m a costume designer which is very, very different. Fashion is all about the clothes and costume design is all about the stories you are telling, so what I do is nothing to do with the clothes other than using them, if you see what I mean. It’s not the clothes in themselves, except some of these were more like that because they were really impactful and trying to tell a specific story, so I’ve never ever wanted it to be anything to do with fashion as it’s not my area of interest. But I will of course, use fashion if that’s the point of the story which, this one was. I don’t take much interest in fashion or clothing in my real life. I just love telling stories and I tell stories with clothes, so that whole world is totally alien to me and I would never want to be what she became, thank you. 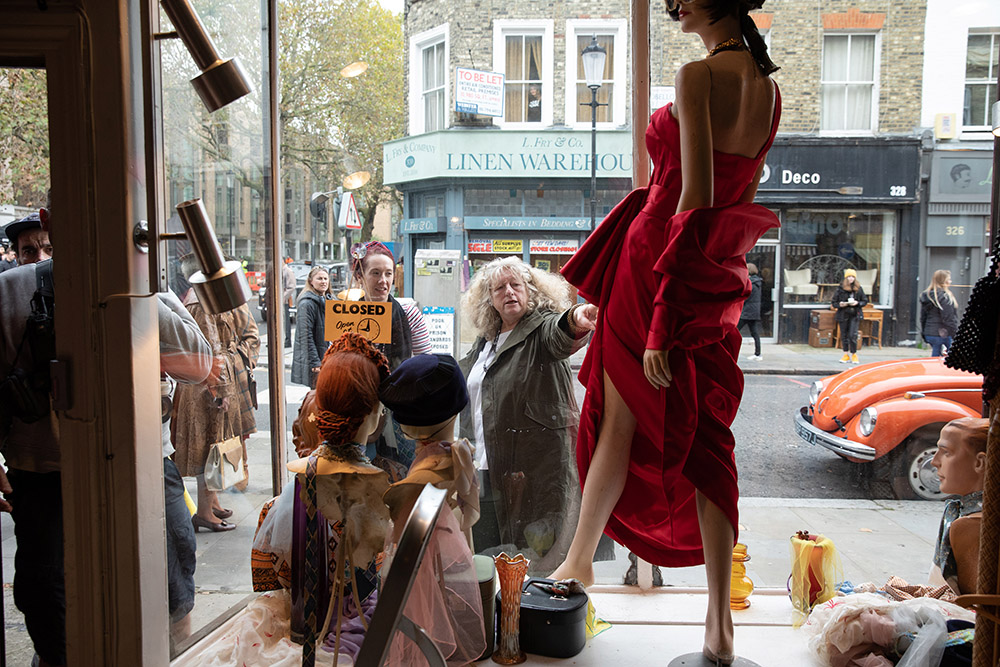 Were there any vintage pieces used for the movie or was everything made from scratch?

I think there’s a jacket she wears that’s a vintage piece that we found in Portobello. We found loads of real vintage pieces but then tended to remake them. I think there were very few that were actually “for real” in the film. I was quite keen on using real vintage at the beginning but then, we often needed a double because of stunts or photo doubles. So, it’s a little bit trickier than I had realised. But at the beginning, I definitely wanted to and went to Portobello every single Friday morning. I was there collecting bales of stuff and then in Los Angeles, I went to every vintage store when I went out to fit Emma Stone. And in New York there’s an amazing massive vintage market which I frequented where all the dealers come together. So, we did use, and have a lot of absolutely “true” vintage stuff in our work room which we utilised as the base and the inspiration for a lot of the clothes, but mainly they were remakes.

If you could redesign a costume from the movie which look would it be?

I’m funny, there’s always something I worry about, but I can’t remember what it is I’m worrying about in this one because I’ve only seen it once on a very small screen. I can’t quite remember … there’s bound to be something I would though, but right at this moment you’ve stumped me, I have no idea.

Do you have any advice for those wanting to follow in your footsteps?

Learn. Number one, remember you’re always part of a crew. You may be called costume designer, but you will be reliant on your team and the more you support and praise your team, probably the better work they will do. And you should always approach things in little pieces at a time and try and learn every craft … so you can dye, you can sew … you don’t have to be brilliant at it, but you understand the process. You might only be able to cut and drape to some extent and there will be people who are better than you, but it’s really good to know how it works. Next, be very open and show the director everything—I bombard my directors with fitting photographs. It’s important to keep everybody in the loop because you are not on your own, and it’s not all about you. You’re part of a whole team, and yes, you are heading up a crew, but you are reliant on that crew, so teamwork is important. If you want to do your own thing, be a fashion designer or a fine artist, because in those worlds, you can absolutely do your own thing much more. That’s my advice … and be humble.

For more fashionable highlights from the movie, click HERE. 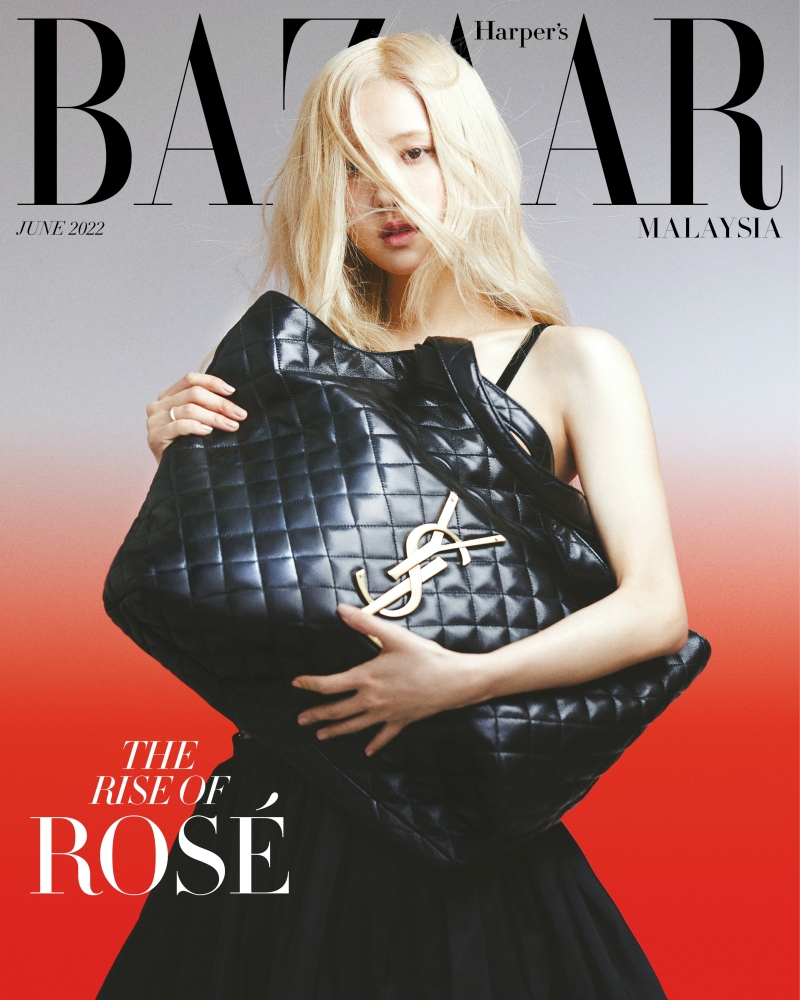 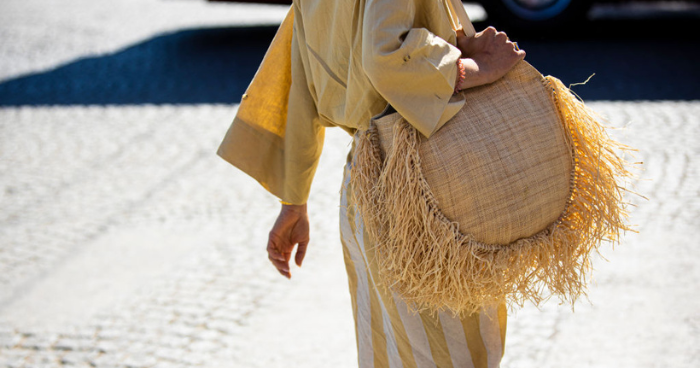 These 19 Linen Dresses Are All You Need for Summer 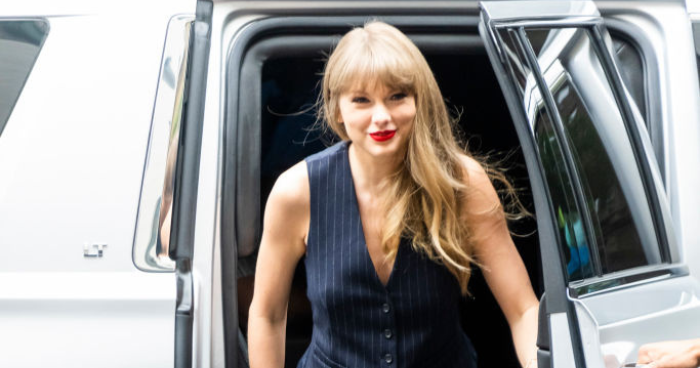 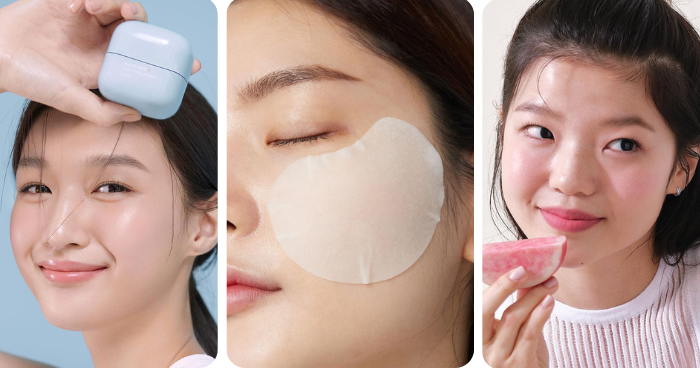