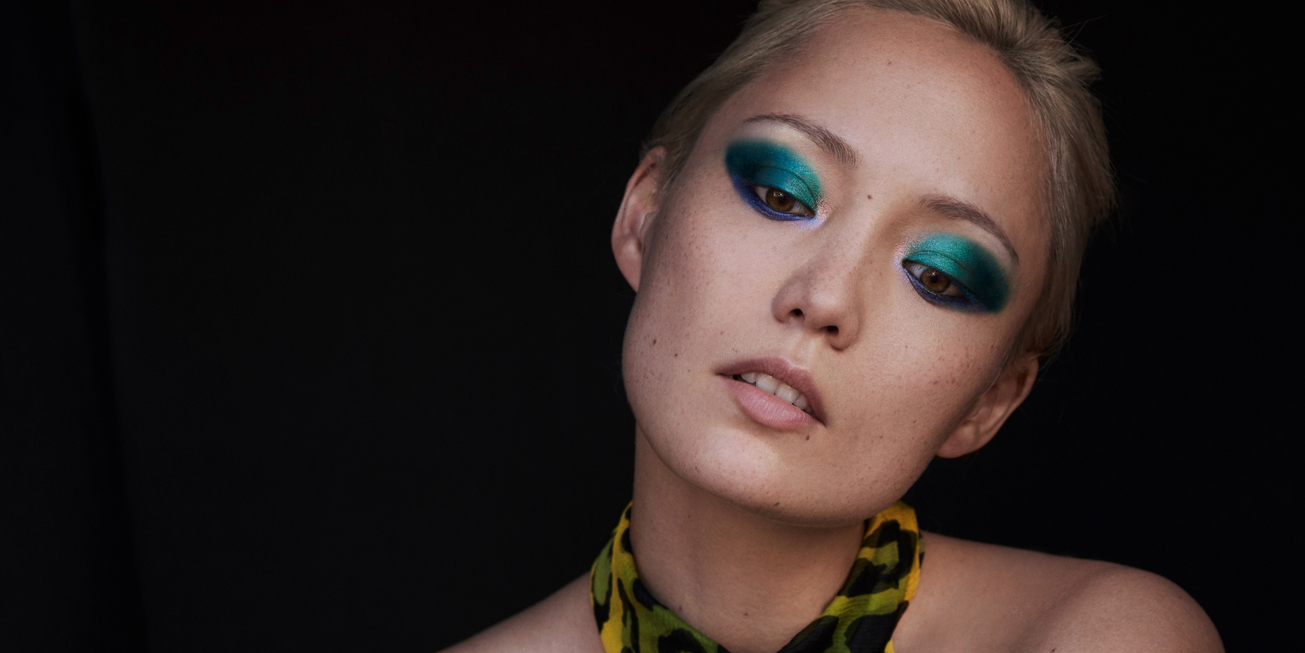 It’s 8.15am on the first day of Eid, and instead of getting prepped for the morning’s festivities, I’m psyching myself up for a cross-continent Skype chat with Pom Klementieff. She is, of course, none other than the French-Russian-Korean actress, who turned heads as the bug-eyed extraterrestrial Mantis in 2017’s Guardians of the Galaxy Vol. 2, and this year’s record-breaking blockbuster, Avengers: Infinity Wars. This time however, she’s swapping out her antennas and turning heads as Harper’s BAZAAR Malaysia’s latest cover girl. 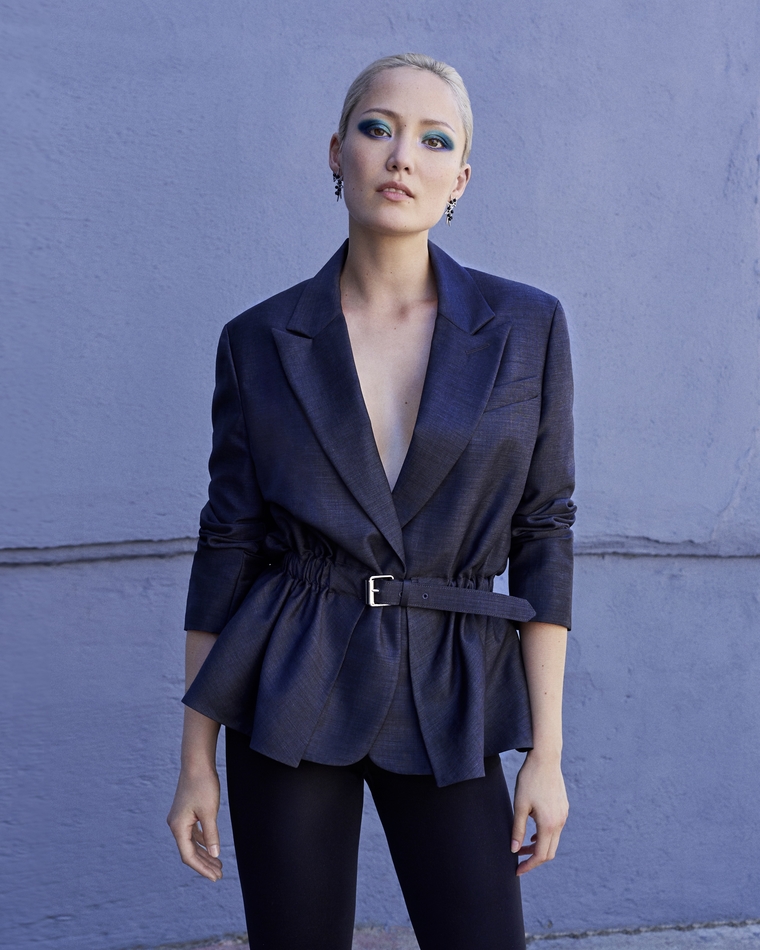 A shameless disclaimer: I’ve been a big fan of the Marvel Universe for the longest time (Saturdays with X-Men, ftw), and the moment we managed to lock in this cover story, I squealed. So imagine my reaction when a chat bubble appears on my screen with the words, “Ready whenever you are, Amy!” Seconds later, I am face-to-face (or rather, webcam-to-webcam) with the platinum-haired beauty.

Even when not in character, her jovial personality shines through. “Oh, I look like a zebra!” she laughs, having noticed the horizontal overcast on her face produced by the blinds on her window. To my surprise, we actually managed to catch each other in daylight amid the comfort of our living rooms, despite the 15-hour time difference. Hers, bathed in LA’s evening sun and mine, of Kuala Lumpur’s morning glow. “Don’t be silly!” I respond, before telling her it reminds me of a Hitchcockian mise-en-scène. We pose for each other for a good five seconds before bursting into laughter, and just like that the ice is broken. 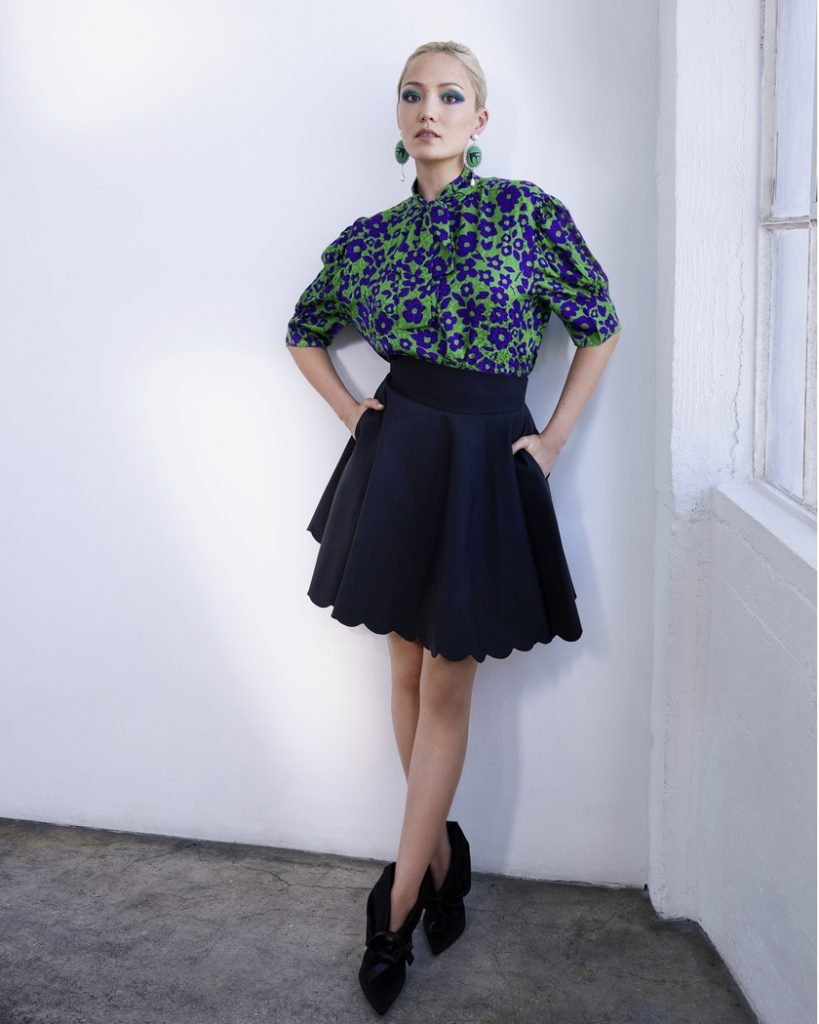 Blouse, skirt, shoes, and earrings; all from Miu Miu.

Like two bi-continental friends catching up, I ask how the BAZAAR cover shoot had gone, photographed by LA-based duo Claudia and Ralf Pulmanns just the day before. “I loved it. It was so much fun!” she exclaims, before mentioning she drove straight to the premiere of Damsel the moment shooting ended. Styled by celebrity stylist Annabelle Harron, Klementieff was transformed into an ’80s siren; gilded lamés, power leathers, and Mantis-green eyeshadow galore. “It was funny. I was wearing a Miu Miu outfit, with big earrings and dramatic make-up, and since the director had invited me, I thought, “Why not!'”

Why not, indeed, considering the 180 Insta-compliments she received the day after: one user commented “A FASHION ICON”, while at least 20 others called her “KWEEN”. She is, after all, a fashion girl at heart, having already attended last year’s CFDA Fashion Awards on the arm of French designer Joseph Altuzarra, as well as the industry’s sparkliest events, including Chanel’s most recent Haute Couture show in Paris. “I like to take risks,” Klementieff explains about her red-carpet persona. “It’s more about style and fashion, and not something sexy. It’s almost too easy if it was.” Think techno-tweed Chanel suits and Saint Laurent’s Le Smoking jackets in that regard. But at home, she’s a little more in tune with herself when it comes to personal style, honing in to her mood for the day. “Sometimes, if I’m feeling down, I’ll put on something colourful to put my mind on a positive note. Other times, if I’m feeling really incognito, I’d go for something a little more casual with flats.” For our Skype sesh, she wears a simple strappy top and jeans, while yours truly is a little overboard with a blue chequered look inspired by Belle from Beauty and the Beast. “It’s like playing playing a different character every day,” I muse, to which she completely agrees. “And that’s why I do this job. It’s boring to just be the same person all the time and to look the same, and it’s also the reason why I love to approach different characters.” 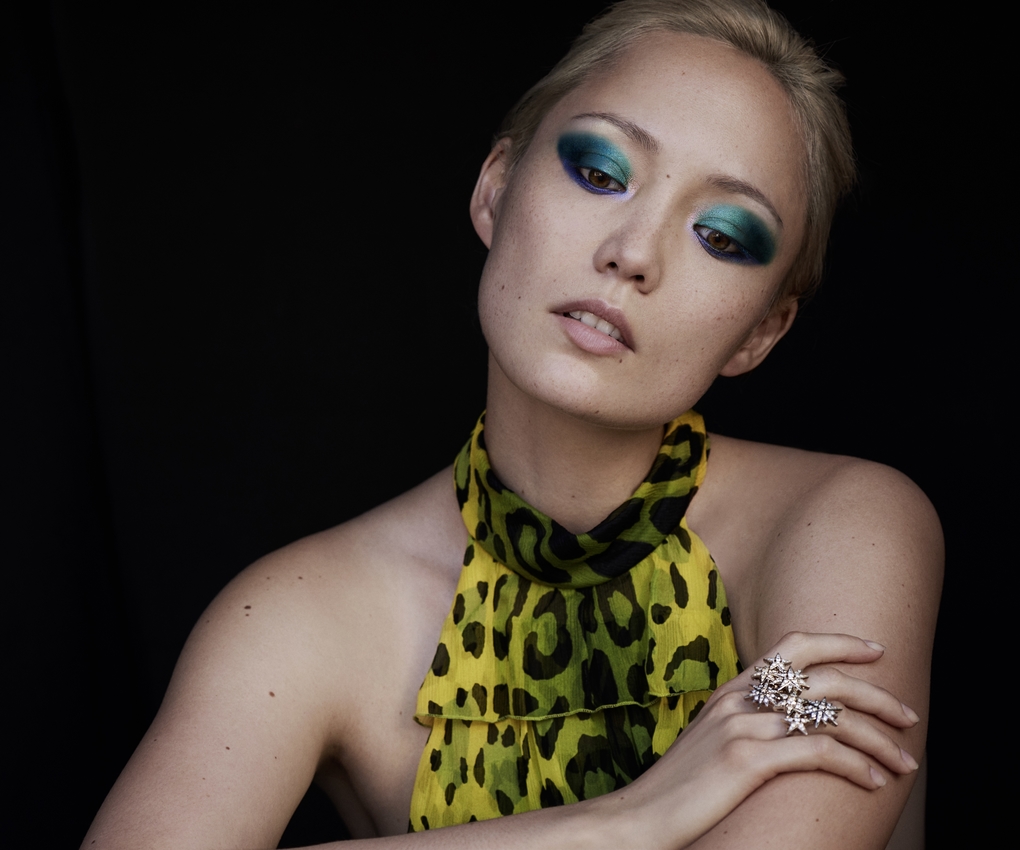 Case in point: her role as a Siberian nomad in the 2009 Belgian film Loup; as a sleek yet seductive bodyguard in Spike Lee’s 2013 remake of Oldboy; and most recently, as everyone’s favourite emphatic Mantis. For those who hadn’t read the comics, it’s worth nothing that her biggest role to date was conceived very differently from its original. “James [Gunn] wrote his version of Mantis to be more complex, interesting, and fun, unlike all the other female characters from the Marvel Cinematic Universe,” Klementieff divulges. “But because of that, there was so much to create. It brought me back to when I was a kid … she doesn’t know how strong she is. She’s complicated and she’s weird, and she also suffered during her childhood. There’s so much more to learn about her, which we will learn in Guardians 3.”

Evidently, Klementieff wears her heart on her sleeve. As invested as she is with the characters she portrays, it all stems from her innate ability to live expressively, despite her trials and tribulations. Her father, a diplomat of French-Russian heritage, passed away when she was only 5, while her mother eventually developed schizophrenia. Soon, she began to live with her aunt and uncle–the later died when Klementieff was only 18 years old. Tragedy didn’t stop there; her brother Namou committed suicide just seven years later. As I did my primary research prior to this conversation, I couldn’t help but feel heartbroken, yet in awe of such courage and resilience. “As Nietzsche says, ‘That which did not kill us makes us stronger,” she says, with a twinkle in her eye. “Life is complicated; it’s heartbreaking and beautiful at the same time. Some people try to avoid [the realities of] it, and I get it, because it hurts. But I’ve always been interested in turning it into my work.” And it’s this exact optimism that has brought her to where she is today. 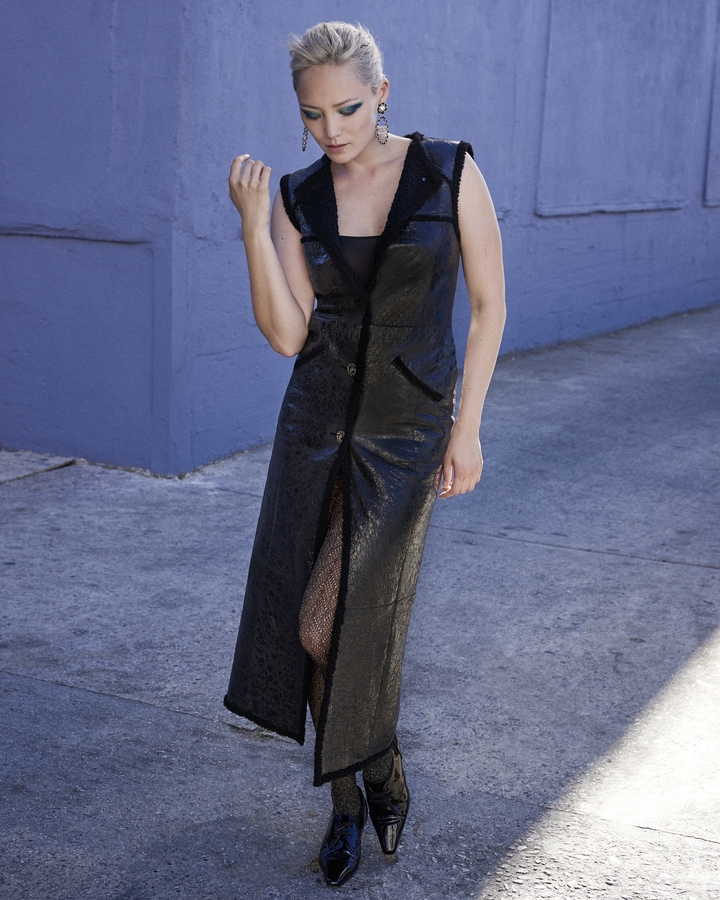 Dress, vest, tights, shoes, and earrings; all from Chanel.

In fact, it’s a consolidation of both optimism and escapism. It became apparent to Klementieff then that in order for her to push through, she had to immerse herself in the world of theatre. Traversing between the French countryside and Paris, Klementieff would often take the train to watch independent arthouse films all by herself, only to come home with the desire to be a part of that world. “I saw it as a form of escapism,” Klementieff explains. “It didn’t matter if I ended up as an actress or not, I just wanted to be a part of the industry.”

That soon happened when Klementieff won a scholarship to pursue acting at the prestigious Cours Florent in Paris. “My theatre teacher actually pushed me to audition for this theatre competition,” she recalls. And then, two years down the road, she found herself starring opposite Chatherine Deneuve in Gaël Morel’s Après lui. 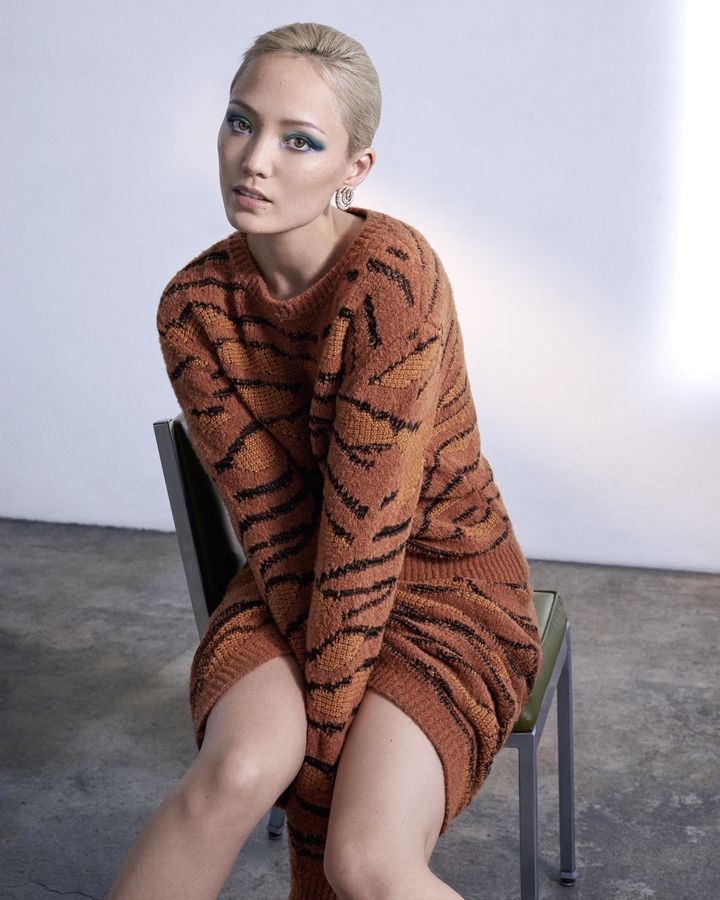 Sweater and skirt, both from Stella McCartney. Earrings, H.Stern.

“It was my first role, but I remembered having so many scenes with her,” she says of her time with the French icon. “In one scene, I actually fell down a flight of stairs and just right after, Catherine Deneuve said ’emotions keep you warm’ to me in French. It was so cool!” What’s cooler is the fact that Deneuve had also brought her own CD of the Bee Gees to the film’s wrap party. “You know, sometimes people think actors are ‘cool’ and ‘mysterious’, but it’s not like that at all. Catherine told me that people expect her to be a grande dame, but she’s just really down to earth.”

Funny, because with the multiple spotlights now on Klementieff, it seems that the roles are now in reverse. At the most recent Comic-Con, at least several fans, including little girls, were dressed as Mantis. An inspiration, to a new generation. “It means the world to me to have someone believe in me so much,” she gushes about her whirlwind experience. “In everyone’s life, there are always people who come in and play the role of the mentor. And now, I can’t wait to be able to give back.”

Her best advice? “I am Groot,” she chuckles. Spoken like a true superhero.