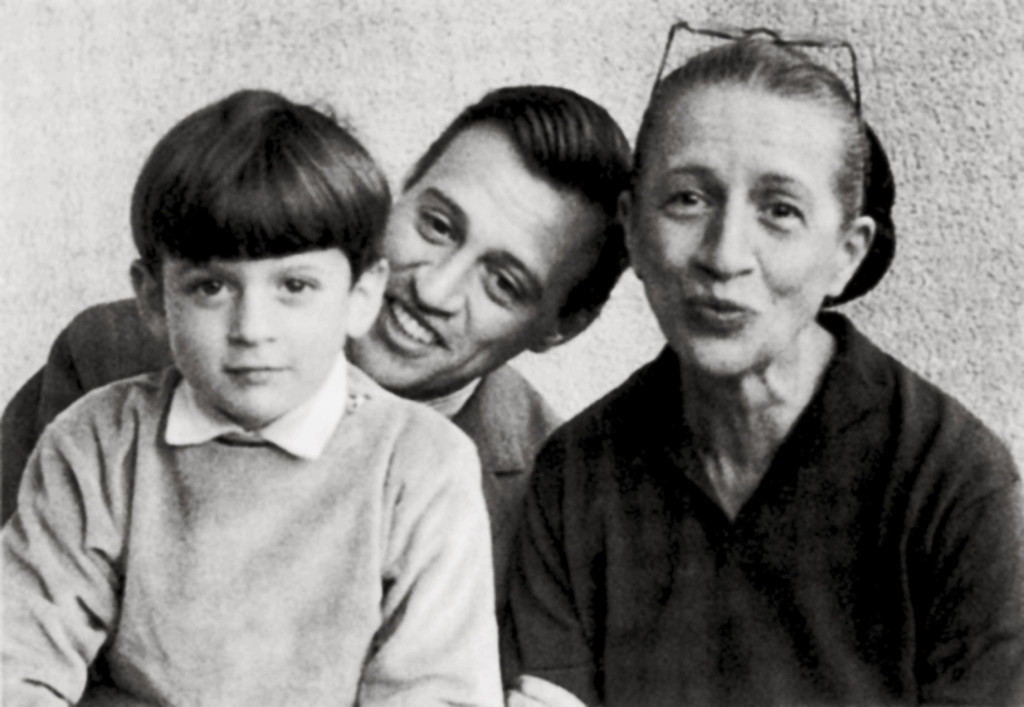 Vreeland with her son Frederick and grandson Alexander, circa 1960.

My grandmother had a tendency to romanticize. My family and I lived in Morocco for a while when I was a child, and she was convinced that I went to school on a horse and had a camel in the backyard. To this day she would still believe that. That was just her version. And it didn’t seem necessary to tamper with it. I didn’t want to say, “No, I go to school on a bus.” Her romantic visions were part of why she was so successful. It’s how she inspired people like Richard Avedon to create these amazing, fantastic pictures. Of course, if she had been a bookkeeper or a newscaster and was romanticizing facts and figures, then that would be worrisome. But her imagination gave her images that sense of dreaminess.

My first memory of my grandmother is from when I was about five years old. She was working at Harper’s BAZAAR at the time, and I was living in Germany with my family. She and my grandfather came to Bonn and spent a week with us. We visited German castles, and I remember having a wonderful picnic lunch in Remagen, where the Allies crossed the Rhine during World War II. I also remember all the bags she had. If you have to count the bags, you know it’s too many! There was always a major procession of Louis Vuitton trunks, and after every trip she took they had to go back to Louis Vuitton to be refitted.

I knew from the beginning that my grandmother was different. She certainly wasn’t the kind of grandmama who would cook a big pot of pasta on the stove. But she was never intimidating to me. In my teens, I went to school in Paris, and she would visit me whenever she came for work. She always wanted to know what my life was like and what I was doing and seeing, but she wasn’t the kind of person to pepper you with questions; the conversation was always spontaneous. She liked to walk and talk – not that we’d go very far, just a block or two, and then we’d get back in the car. Her used of words, her cadence, her playing with volume was so rich and dynamic that there was an exotic quality to her communication.

Fashion people can be very catty and judgmental, and put down others and criticise what they’re wearing, but my grandmother wasn’t from that school. She really believed that if you didn’t have something positive to say, don’t say anything. And that was such a relief in a world of people who can be so outspoken in their criticism. You see so many people who say, “Oh, that jacket is too short,” or “Her bun is terrible, and it shouldn’t be there.” She didn’t work that way. Her outlook was tremendously empowering, because she didn’t impose anything on anyone. She had a unique character in that she wasn’t really a society woman, nor a critic or a social activist. She wasn’t a lot of things, but she felt that she had plenty on her plate, and she’d just do what she did. She didn’t feel that her work was a trampoline for something else.

I was born in 1955, and my grandmother left BAZAAR in ’62. I was very, very close with her, but she never talked about her career. I think it’s because she didn’t look at her job that way. She saw it as what she was working on at the time, and she was not the type of person to talk about work outside of work. She was never political about her job. She didn’t have management retreats, she didn’t have meetings, she didn’t have agendas and goals or lists of who we’re going to be and who we’re going to talk to. She had no marketing department. She just wrote memos and letters to the people she worked with who were good, and put out a great magazine. Supposedly, my grandmother got to BAZAAR because Carmel Snow, who was then the editor-in-chief, saw my grandparents out dancing one night. She thought my grandmother looked amazing, so she said, “Come see me at Harper’s BAZAAR,” and then gave her a job. I don’t know if it really did happen that way, although I think the bones of the story are pretty solid.

My grandmother was at BAZAAR for 26 years, and the body of work she helped create there is like a Fort Knox of visuals that still reverberate around in fashion today. In terms of imagery, I believe that those were her most important years. The pictures haven’t dated at all. Looking through them, you can see a fascinating evolution of women and their role in society, their role in the family, their relationship with their own bodies. My grandmother took the lead in that sense, and the reverence she had for women is astonishing. She made women look magnificent, never overtly sexy or inappropriate. There was a sense of respect, and it was all done tastefully, never cheapened or hardened – or drab, which was very much the look of a lot of editorial images at the time.

The stories about my grandmother’s childhood are always a bit cliché – the sister was prettier, and so forth. I think it was a different era. I don’t think my grandmother was a great mother, and I don’t think her mother was a great mother, either. In those days there was more of a separation between parents and children. I was blessed though, to have had a much better relationship with my grandmother than my father and uncle had. She had nicknames for everyone, partly because she wasn’t very good at remembering names. If you got a “poo” on the end of your name, that was a compliment. My father’s name is Frederick, and she called him Frecky-poo. When I was a child, my nickname was Sasha, and she used to call me Sashi-poo. After I turned 20 and started calling myself Alexander, I once phoned her office and her assistant told her that Alexander was on the line, and she got all excited because she thought it was a hairdresser named Alexandre, but instead she was stuck with me.

She always encouraged me to do what I wanted in the most wonderful way – my getting married, my travels, and my friendships. The one time I can remember her disapproving of something was when I moved to New York at the age of 30. I was thinking that maybe we’d live in Sands Point, in Nassau County, which is where some of our family friends lived. I mentioned it to her, and she said, “Suburbia…?” I got the message. We wound up getting a loft in SoHo instead.
I have lots of memories of dinners with my grandmother and a whole bunch of photographers and models she was working with: David Bailey, Patrick Lichfield, Cecil Beaton, all these different characters. She was tremendously fond of Lauren Bacall – she called her Betty – and they shared a cook for the last 10 years of my grandmother’s life. She also had a very special relationship with Jackie Kennedy; it was a real, important friendship that lasted a lifetime. During Jack Kennedy’s presidential campaign, Jackie reached out to my grandmother and asked her advice on what to wear, which is very poignant. You can read in letters that it was all “Dear Mrs. Vreeland this,” “Dear Mrs. Vreeland that,” and then at a certain point it switched to “Dear Diana.”

When my grandmother was entertaining, she held court. She was in charge. She loved round tables with eight to 10 people, and vibrant conversation. She always had a glass of vodka with a chunk of ice and a peel of lemon. She could drink a lot of them, smoking the entire time; she never stopped smoking. There was a lot of hookah too.

She was very fastidious. She always had a colourful tablecloth with matching napkins, and the tablecloth was ironed on the table to make sure there were no folds. She would never entertain unless the silver was all shined. She also believed that fragrance was the backbone of a home, so she always had wands of incense burning and those Teflon discs with oils that you put on top of lightbulbs. She had a room scent that she’d spray, and she kept candles burning, and she would inject scent into her pillows with a hypodermic needle- all of that going on one at a time! She was very big on pillows. She was convinced that if you didn’t have support on the bottom of your back you would be uncomfortable. She also cared about people sitting straight. She would grab my hair with her fingers and pull me up so that I’d stand taller, just three inches more! She would credit the fact that she’d had training as a dancer. Her posture was always very good.
Her conversation always had a certain lightness to it. She didn’t talk about unpleasant things. In the last two years of her life, she decided that she didn’t want to see anybody anymore, so she didn’t see anyone except her family. She would talk on the phone – she would even invite people over for dinner and talk to them on the phone from her bed in the other room while they sat around her dining room table, but she wouldn’t see them ever. Not once. She wasn’t on a death spiral or anything. She just didn’t think she could present herself the way she wanted to, so she didn’t.

I think that “discipline” is a really good word for my grandmother. I remember coming home from dinner with her late one night, and she had a light box on the dining room table and a bunch of contact sheets that she needed to go through that night to approve. She laid out all of the pictures and sat there far into the night finishing off what she had to get done. She wasn’t the kind of person to say, “Oh, no one’s going to see the dust ball in the back corner” – she would say, “Pull all the chairs out and sweep properly.” She didn’t skim over anything.

My grandmother could see things that others couldn’t, and the people she included in BAZAAR always had a certain intelligence and strength and energy. I recently met a woman who had been my grandmother’s secretary for many years, and she said that when a person came in to be photographed, everyone at the magazine would say, “What are they shooting her for?” And then they would see the pictures and say, “Oh.” My grandmother could look at people and see their talent. It was a tremendous gift. As told to Charlotte Cowles.
Diana Vreeland: The Modern Woman, edited by Alexander Vreeland, will be published by Rizzoli in October. This month, he adds a new fragrance, Devastatingly Chic, to the Diana Vreeland Parfums edition.