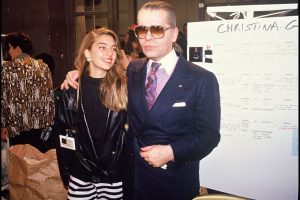 With a young Sofia Coppola at the autumn/winter 1988 Chanel show.