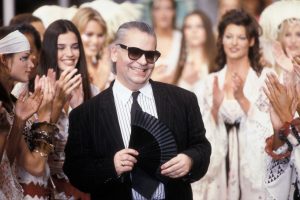 The designer during the finale of the spring/summer 1993 Chanel show.