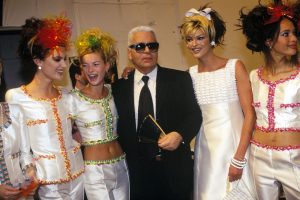 With a young Kate Moss and Linda Evangelista backstage post-show.