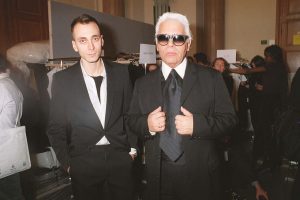 Lagerfeld joined Hedi Slimane backstage at the Dior Homme show in 2001, where the latter was then creative director. The Chanel designer was so keen to wear one of Slimane’s skinny-fit Dior suits that he lost six stone.