No Women Received Grammy Nominations For Record of the Year 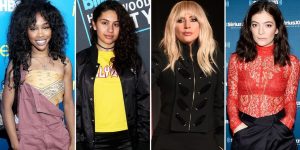 Women seem to be missing from some of the biggest categories in the 2018 Grammy Award nominations, which were announced yesterday. Meanwhile, male artists like JAY-Z (eight nominations), Kendrick Lamar (seven nominations), and Bruno Mars (six nominations) top the list of contenders.

No female artists are included in the Record of the Year nominees, which consists of Childish Gambino (“Redbone”); Luis Fonsi, Daddy Yankee, and Justin Bieber (“Despacito”); JAY-Z (“The Story of O.J.”); Kendrick Lamar (“HUMBLE.”); and Bruno Mars (“That’s What I Like”).

There was also only one woman nominated for Album of the Year — Lorde. Her LP, Melodrama, is up against Gambino’s Awaken, My Love!, JAY-Z’s 4:44, Lamar’s DAMN., and Mars’ 24K Magic.

It didn’t take long for music fans to notice and say something.

Grammy facts: The last time Record of the Year had no female artist was 34 years ago. #GRAMMYs

Not a single woman is nominated for Record Of The Year. I’m glad at least Praying by Kesha has a Pop Vocal nomination and Rainbow by Kesha, Joanne by Gaga and Lust For Life by Lana Del Rey have a Pop Album nomination. But goddamn the #GRAMMYs are so male dominated its stupid.

The female representation is a little more promising in the Song of the Year category (which acknowledges songwriters, while Record of the Year recognises the artist’s performance, producers, mixers, and engineers, according to the Recording Academy). Alesssia Cara (featured on Logic’s “1-800-273-8255”); Julia Michaels (“Issues”); and Erika Ender (who co-wrote “Despacito”) are in the running. The Best New Artist Category contains more women, with Alesssia Cara, Julia Michaels, and SZA making up three of the five nominees. (The other two are Lil Uzi Vert and Khalid.)

SZA is actually the most-nominated woman this year with five nods, including Best R&B Song and Best Urban Contemporary Album. She’s tied with Gambino, Khalid, and producer No I.D. Compare that to last year, when Beyoncé led with nine nominations and Rihanna followed close behind with eight. Other nominated women this year include Lady Gaga, Kesha (an emotional first), Cardi B, Kelly Clarkson, and Lana Del Rey, while pop princess Katy Perry didn’t receive any nominations at all.

But what the nominations lack in female representation, they make up for with a noticeable shift in diversity. Rap, hip-hop, and R&B artists — many of whom are black or Latino — are heavily represented after years of being notoriously overlooked in major categories. The change arrives several months after the Grammys were deeply criticised for awarding Adele’s 25 with Album of the Year instead of Beyoncé’s Lemonade. For 2018, no rock or country acts were nominated in the top four categories. It’s also the first time since 1999 that no white men were nominated for Album of the Year, Huffington Post points out.