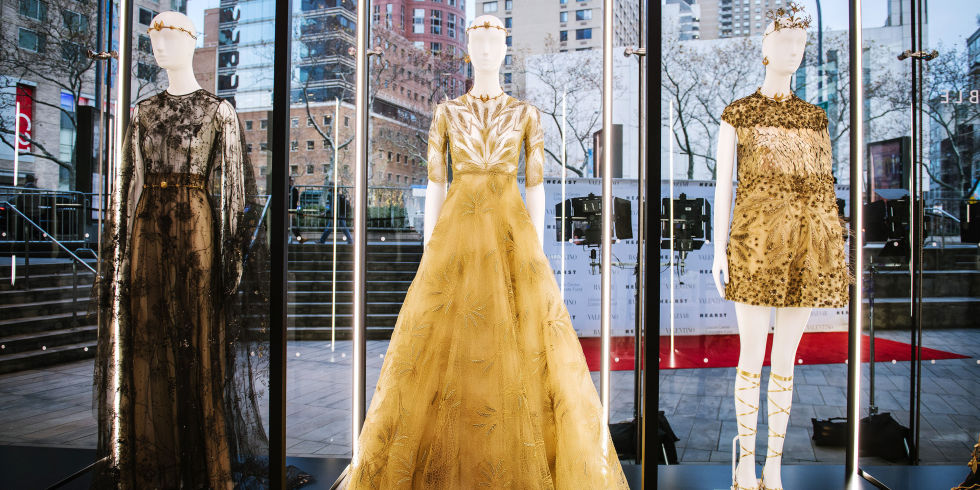 Valentino’s Mirabilia Romae Haute Couture collection first showed in July in the open air of Rome outside of its largest store in the Piazza Mignanelli—in its own Roman Forum courtesy of artist Pietro Ruffo. The collection made its next appearance recently at “An Evening Honoring Valentino” at Lincoln Center, exhibited to coincide with its designers, co-creative directors of Valentino, Maria Grazia Chiuri and Pierpaolo Piccioli, receiving The Women’s Leadership Award. The dreamy, Eternal City-inspired collection was the perfect backdrop to give a well-deserved bow to Chiuri and Piccioli, set to the sounds of Blondie performing with Julliard students. Read about what inspired the charming duo, why Blondie is punk couture perfection and about the cult of Zoolander—and see the collection up close. 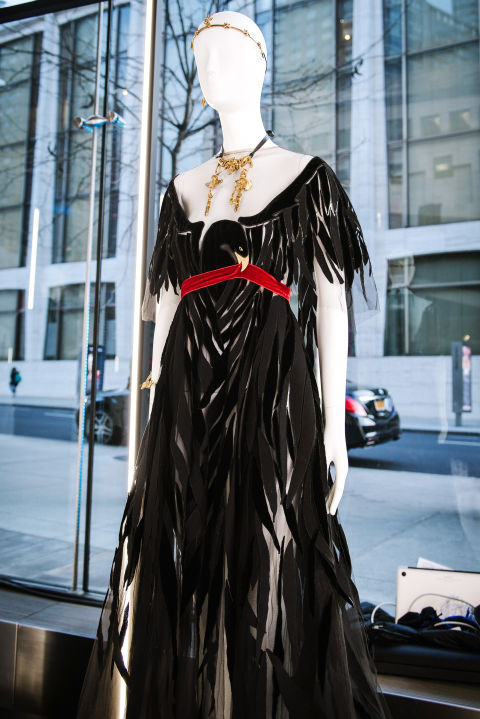 HB: What does it mean to you to be honored by Lincoln Center?

PP: I think it’s a great honor, for sure, because we create fashion in a very authentic way and when you feel that people recognize your vision of beauty, that we delivered it and that it’s great, it feels like you’re part of a community. 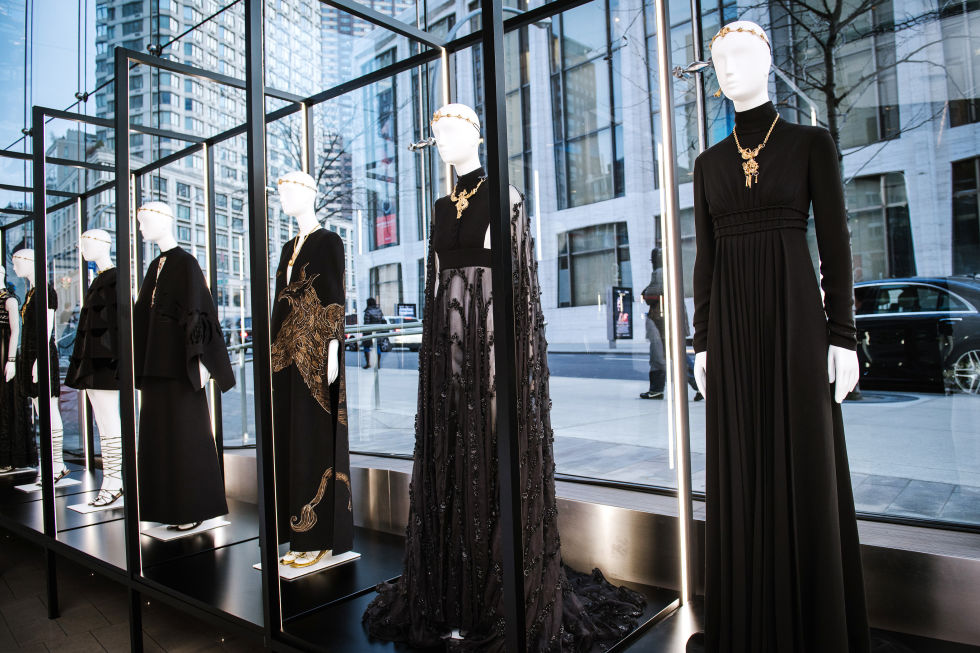 HB: Lincoln Center is truly a place for the arts, which in particular do you love?

PP: There are so many things we love. We love art, ballet, everything. Yesterday, we went to see “An American in Paris,” it was beautiful and so joyful and hopeful and it’s so amazing the way you can deliver emotions to people. Like instruments—you can use them to give people an optimistic idea or an idea of beauty.

MCG: Ballets and opera are really important for us. 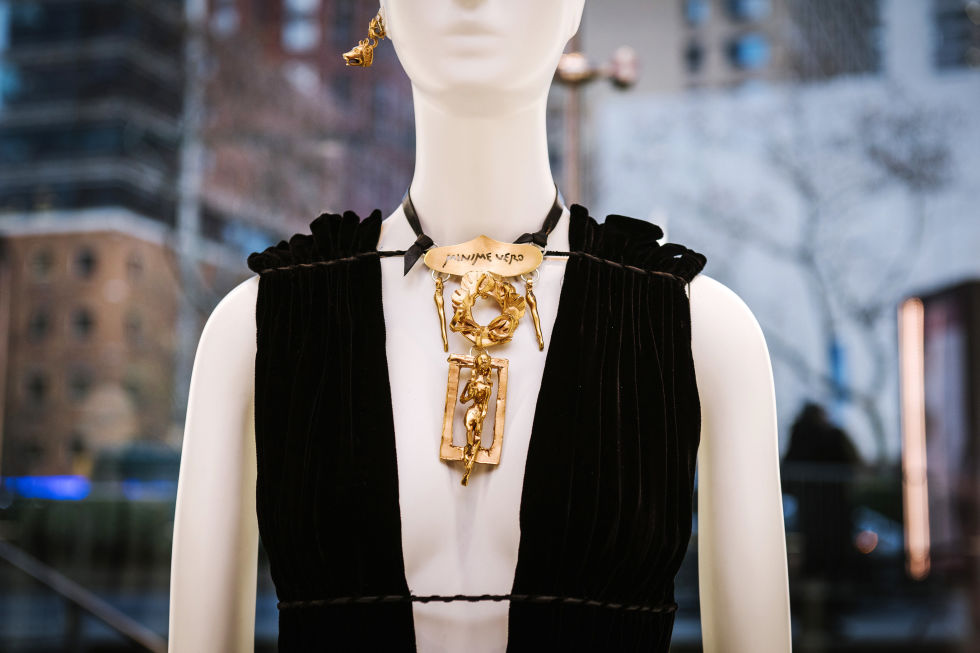 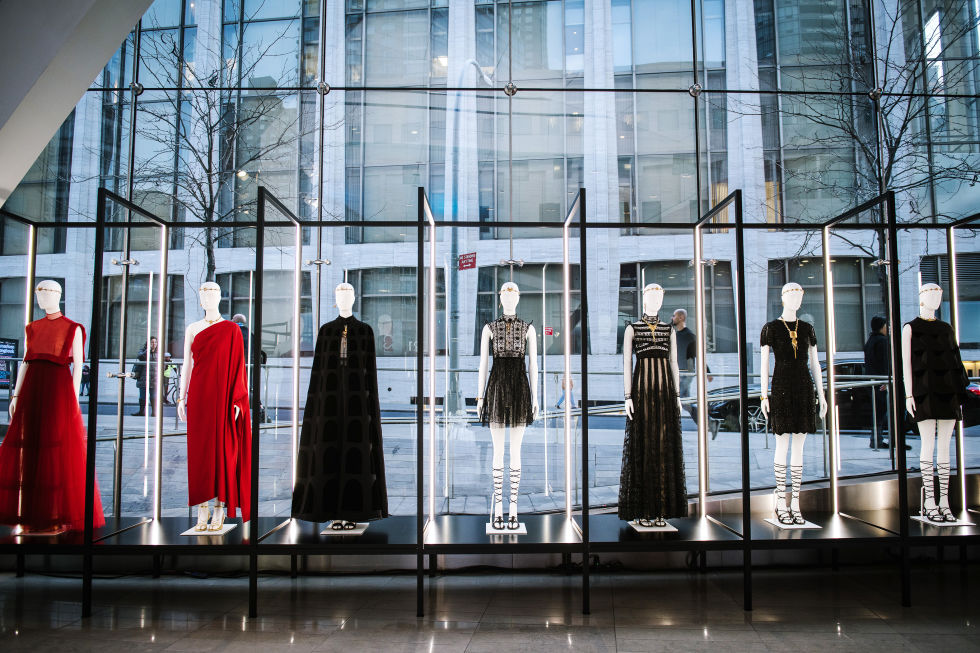 HB: What was the inspiration behind the Fall 2015 couture collection that’s on exhibit and why was Rome the perfect place to show it?

PP: You can see the different Roma. It’s a layered city—it’s pagan, it’s Catholic, it’s imperial, you can see the nomadic parts of Roma, but what made Roma so special is the balance where all these aspects live together. And so such was in our collection. We invented, we had different inspirations, but everything came together in one idea of graceful beauty that has its roots from our memory, but it’s something that will really be known to the future. We had this idea, it’s an antique city but it’s modern the way all the layers, all the aspects live together. And it’s even got a good message, this aspect of living, different aspects living together in a good balance. It’s an idea of tolerance, which we love.

MCG: This collection was inspired by Opera di Roma—our inspiration was Rome because Rome is our city. We’re proud to be in it, to describe in some way our vision and our relationship with this city. Because this city is so full of different kinds of art, because we have the different periods mixed together, so it’s very close to our idea of beauty. It was a very special moment because the collection speaks to our relationship with the city and the art that you can view in our city. 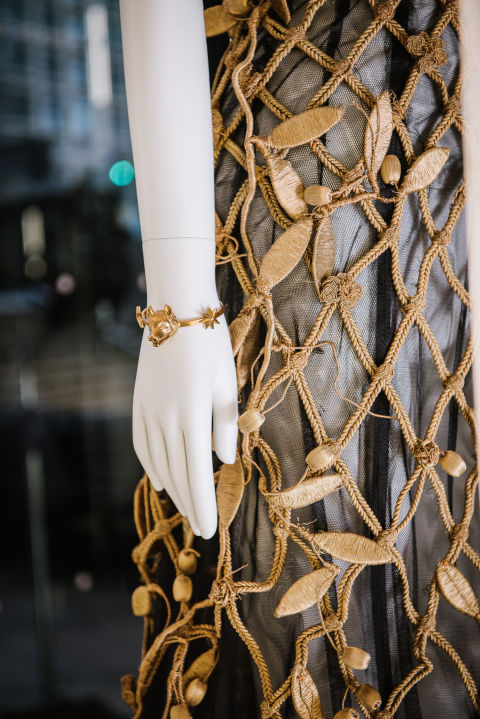 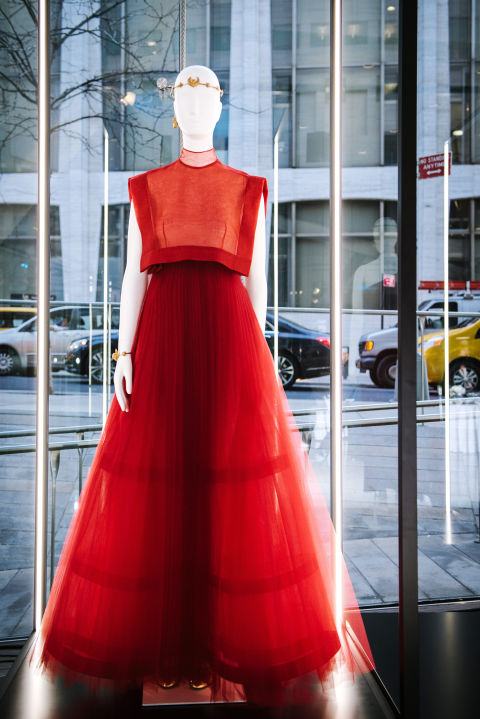 HB: Blondie is performing tonight, are you fans?

PP: Yes, of course. When Glenda [Bailey] came to us saying, “Who would you love to perform for you for this evening?” And we had in our minds Blondie because we grew up with this idea of Blondie, of late ’70s-early ’80s music. And it was cool to see such a punk artist as Blondie was representing in the ’80s in couture. Blondie is a punk icon. It’s a new perspective on this idea of beauty that comes from couture. 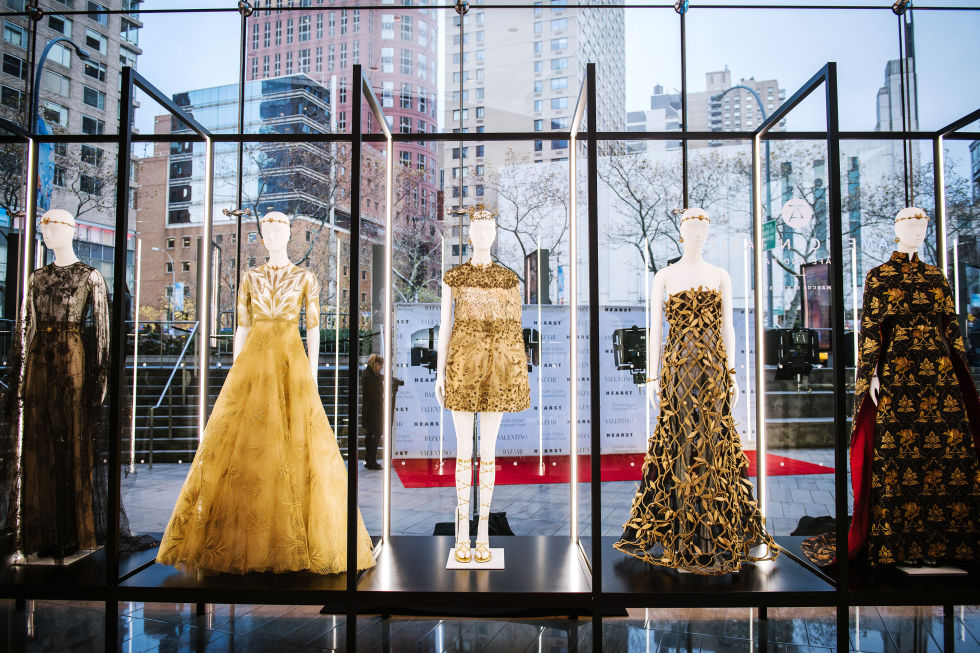 HB: You put the idea of rock into high fashion with the rock stud. Overall is the contrast of couture and rock something that you love?

MCG: Yes, of course. We believe that in each woman is different parts. There is not only one way to be a women. Like Valentino, which is so delicate with a touch of rock.

PP: Cause rock means breaking the rules. That’s what rock means. To come with something new that is not in the rules—and we love this idea of putting discordant elements together to create something new. So rock is when you break the idea of something you already have in your mind and you change the perspective. That’s rock. Change your mind, giving your perspective on things, be subversive in a subtle way. 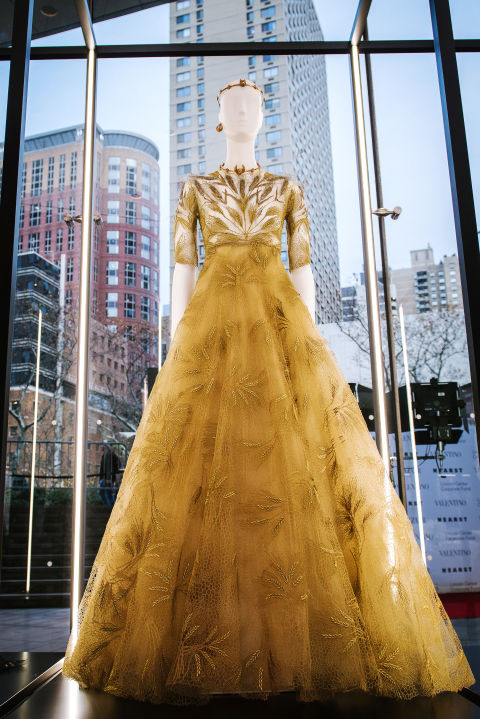 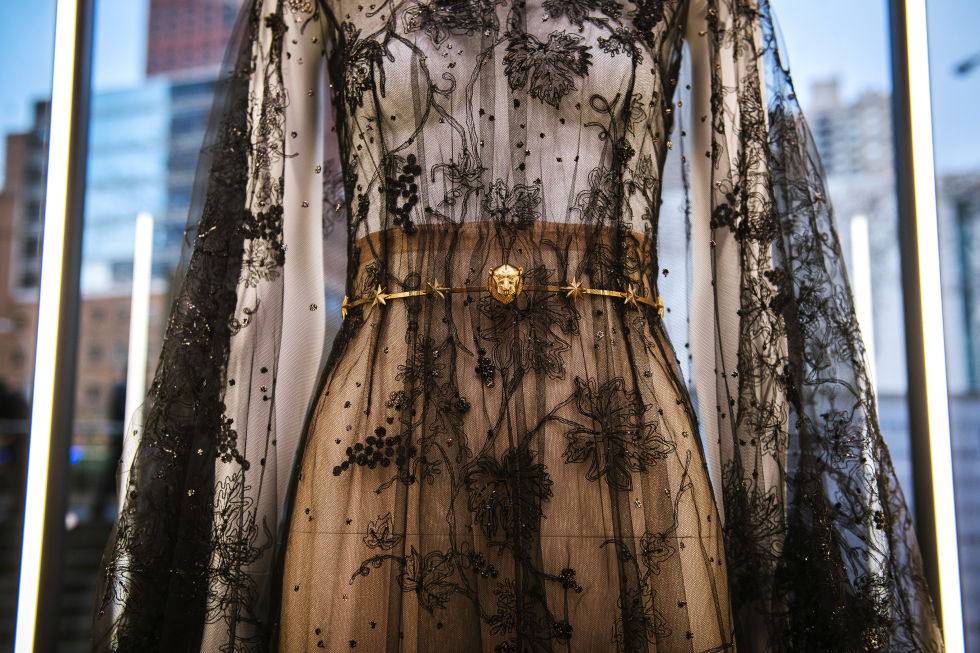 HB: The Zoolander premiere is approaching, will you tell us about your involvement with the film. Do you think humor is welcome in fashion now and then?

MCG: We worked at the time with Valentino in Milan when he shot the original film—we felt so cool. When we became creative directors, we met Ben Stiller for the first time and we immediately started to speak about Zoolander with him. We love Zoolander. So when we met him again and he decided to come to Rome for the film, we were so excited. We found the film so iconic and cool and when he said a new Zoolander is being made, we had no doubts about being involved, but we never imagined honestly the reaction of the audience. The reaction was unbelievable. In our minds, it’s a new way to have a relationship with celebrity. Our idea was not to be ironic, because we believe fashion is serious. But we believe also that you can do something fun. 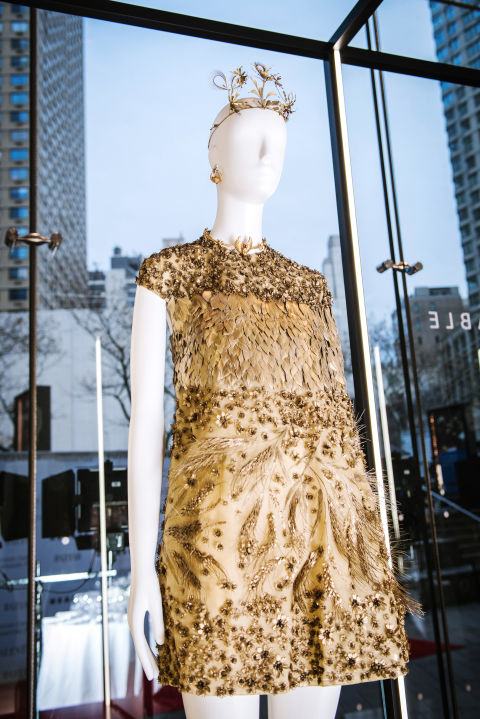 PP: Our show was serious because we feel that fashion is a serious thing. But we of course planned that Ben and Owen would go out at the end of the show. And it was a different moment with different music, but at the end it was like a moment of freedom. Everybody felt that same energy, that same measure of not taking it so seriously. It was a message delivered to everybody, and everybody felt that same feeling. The audience was together in sharing the same kind of emotion. So that was amazing, to feel that 1 billion people—with the social, viral thing—but it came from something very human in the room because of two people coming out with something ironic. It was a totally optimistic vibe.