People /
A Fashionable Life
Siti Kader and Shareen Ramli on their love for food at Siti Li Dining.
By Emmilyn Yeoh. Photographed by Ian Wong. 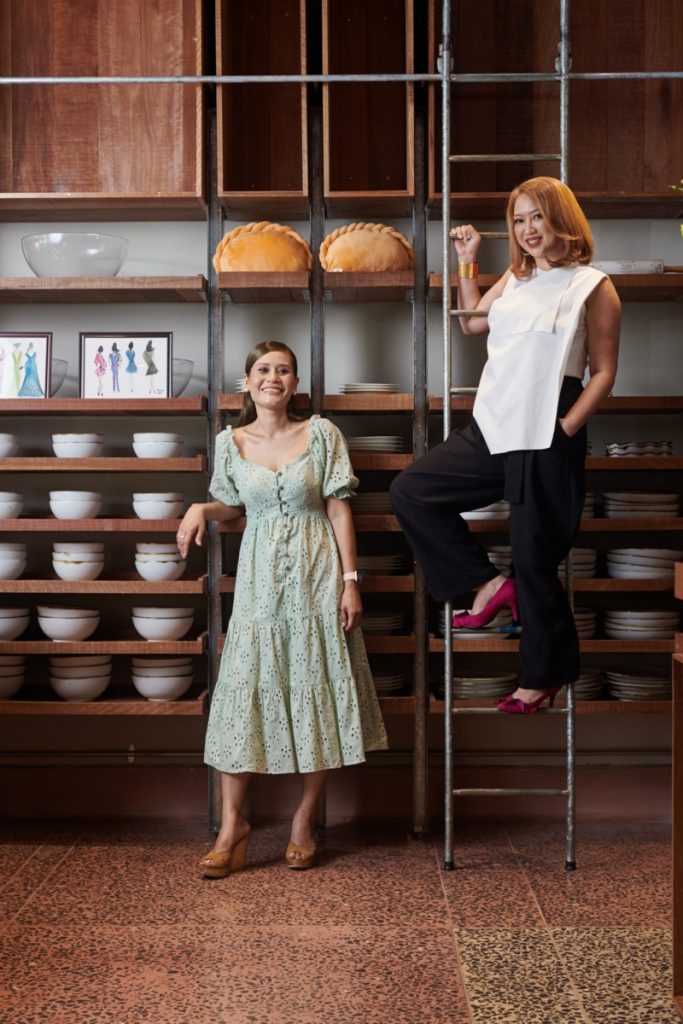 My Siti Li Dining experience starts with a heavenly whiff of butter and that fragrant mingling of meat, spices, and fire, the very moment I push through the doors of the Malay contemporary restaurant. Before me stand two familiar smiling faces, holding a tray of freshly fried curry puffs on a bed of banana leaves, as cups of frothy teh tarik in intricate ceramic cups sit on the table. These curry puffs hold a more symbolic status than its fame as a humble Malaysian pastry—they kick-started the story of Siti Li about a decade ago, when Shareen Ramli got a taste of the culinary talents of Siti Kader, her stepmother. It was Shareen who insisted that Siti’s knowledge of Malay culture and cooking had to be shared with the greater community.

“Someone once told my sister, Noreen [Ramli], that only after 10 years in the food and beverage industry, will you realise you’ve finally grasped the knowledge of running a business,” Shareen says. Having grown up in a family that cultivated her passion for food, taking over the F&B operations of Ascott Kuala Lumpur from her father back in 2004, Shareen has been a female force in the male-dominant industry since the early noughties. “Food is a complex subject, and people are still very naive in the understanding of feeding people food and giving them an ‘experience’. It’s a big responsibility, and this translates to the decisions that you make. It’s not just about showcasing skills,” she expresses.

FOOD FOR THE SOUL

Making it a mission to explore the heritage of Malay cuisine, Shareen and Siti embarked on their journey as guardians of a multifaceted culture through Siti Li Dining, where the most complex broths are made the old-fashioned way and crowd-favourite classics are presented in a contemporary manner—all the while, the essence of Malay cuisine is brought to the fore. “There are so many classic Malay recipes that have lost their identity and place in the food industry because of misrepresentation,” Siti laments.

Drawing parallels between the thought process and idea behind the Japanese omakase, the duo’s technicality of cooking and eating boils down to the marriage of flavours and elements from different dishes that could potentially work together. “What Siti is trying to educate at Siti Li Dining is the chemistry that intermingles between the dishes that you eat. Every item on the menu is a representation of a meal that is complete and self-sufficient for each individual,” Shareen chimes in, before Siti proceeds to cite a common mistake made at other establishments. “For example, if you serve ayam masak merah with any curry variation, the components will contradict one another to create a strange taste. This is definitely a no-no.”

Gone were the days when Siti Li was just a food-studio-slash-café within the KitaKita boutique in Damansara Heights, started by Nori Abdullah Badawi to celebrate the intricate beauty of Malaysian arts and crafts. After two fruitful years, Shareen and Siti took a bet on the future and branched out on their own, reopening Siti Li Dining in a newly renovated location, in August last year, within the same affluent suburb.

Things have finally come full circle. Siti Li Dining is the culmination of what they have dreamed about since Shareen first tasted Siti’s curry puffs. “Siti and I share the same purpose. Our immense trust for each other is what keeps us going every day. The dynamic of our relationship has really matured in the past nine years of us being business partners. Siti is the creative and innovative head of what we do, and I take that creativity and commercialise it. We know how to separate our strengths and weaknesses,” Shareen shares.

Tucking into Malaysian classics of Sarawak laksa and nasi lemak

The Siti Li Dining space is minimalist yet intimate. Rows of wooden shelves are decked with honest ingredients used in their cooking, giving the vibe of a modern and stylish pantry that any at-home chef would covet. The counter is always brimming with Nyonya goodies, as well as jars of old-school candy. Other small touches include a host of straw tudung sajis, a pair of hand-painted red clogs, and colourful woven coasters.

The other important aspect of Siti Li Dining is the tightly curated menu, which comprises of dishes that are near and dear to both Shareen and Siti, ranging from the simple yet flavourful Laksa Johor to the indulgent Nasi Kahwin Koboi. “My mother has a huge influence on how I cook in the kitchen. She was an amazing cook, and had a great understanding of the science of food. Shareen and I both lost our mothers around the same time in our lives. Siti Li is a living memory of our late mothers,” Siti says.

The restaurant is running at full capacity today, but the crew isn’t about to call it a day before trying Siti Li’s signature item, the cekodok pisang that has the town talking. A waiter dressed in a pink custom-made batik shirt strides over with ease, and serves up bite-sized banana fritters served on a two-tier stand. “We almost forgot to put it on the menu, because we were so carried away with the other dishes,” Shareen reminisces. “We had to call the printers and get them to reprint the menu.” Crispy on the outside, sweet and fluffy on the inside, my usual resolve exponentially weakened after savouring each fried ball. What exactly is the secret behind this highly addictive snack? Siti and Shareen both cast glances at each other, before giving an answer to my burning question. “It’s the unadulterated palm sugar that we get from the island of Bintan,” Siti says with pride.

As an avid traveller, Siti gets her dose of inspiration and knowledge from masterclasses in culinary institutions across the world. “I was at Istanbul Culinary Institute for a week, and it was an eye-opening experience. I used to think Turkish cuisine was very one-dimensional, but their process is actually very similar to how Malay food is prepared,” she says. Shareen, on the other hand, is itching to tick Italy off her bucket list. “I think the word to describe Italians is ‘intense’, which makes their cuisine so classic and a discovery at the same time,” she muses. The duo’s worldly view is translated through their vision of expanding the Siti Li community. They’re currently working on a book that resonates with their passion for food and reading. “We’re taking things one day at a time. I want to say we have a lot of plans, but what’s important is not placing too much focus on tomorrow and forgetting to celebrate today,” Shareen laughs.

With far-reaching aspirations for Malay food, in this country and beyond, Shareen and Siti hope to give people enough experience for them to explore on their own. “What we want to do is to pass on the knowledge to more and more people, to spread the word on the respect for and love towards Malay cuisine,” Siti says. “We hope that whatever we do reminds people of something in their lives, whether it’s a new discovery at a friend’s potluck, or a new favourite at an aunty’s house. Classics are not about timelessness, they’re about triggering a memory and sparking familiarity. That’s the magic.”

Fitness & Wellbeing
A new study has (finally) confirmed the link between sleep and glowing skin.

Drink & Dine
From storage and pouring to food pairing tips