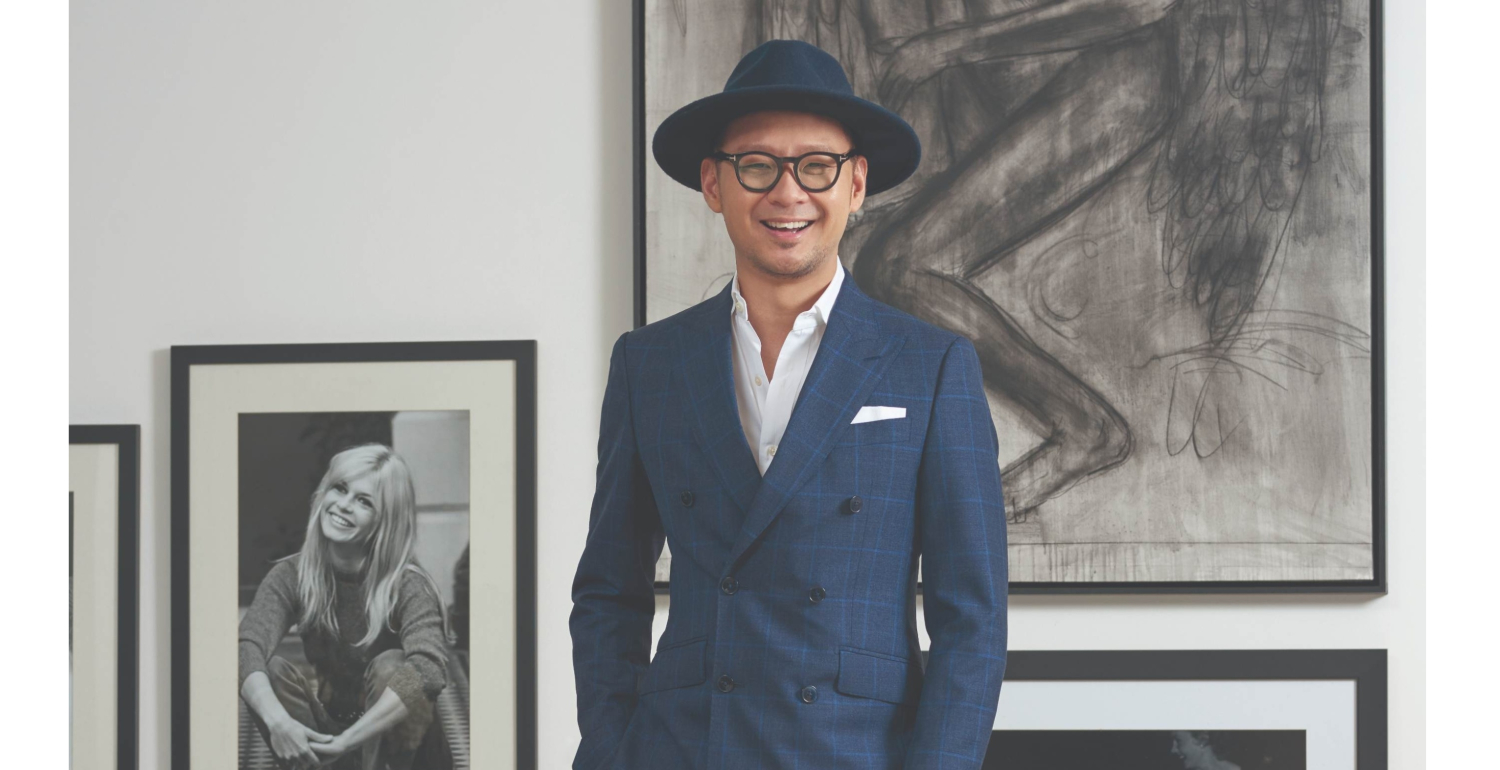 Taking down my Christmas decorations, only for Harper’s BAZAAR!” assures Yun Wen Lai, general manager of marketing  at Pavilion KL, as I make one last tick on my pre-shoot checklist. We meet on the Friday before Christmas, and as promised, the elaborate holiday furnishings are shoved to a corner, revealing an obsessively clean space. Yun is already dressed for the occasion, his choice of clothes echoing the simplicity of his home: perfectly fitted Thom Browne shirt, matching trousers, and of course, his best accessory and signature, his million-dollar smile. “To be honest, when you first texted me, I thought you had gotten in touch with the wrong person!” he laughs, as we joke about my previous attempts at convincing him to open up his beautiful home to BAZAAR. 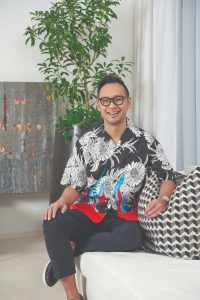 With its sleek surfaces, clean aesthetic, and muted palette accented with modern art, Yun’s apartment at Dua Residency, right smack in the city centre, is the perfect backdrop for our tribute to cool Asians this month. His philosophy when it comes to interior decorating goes beyond the aesthetic. “There has to be a balance between a real home and a showroom,” he muses. “While beautiful things are great to look at, it also has to interact with you on a personal level.” 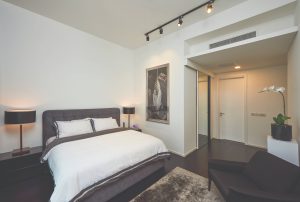 The marketing maven, whose hectic daily schedule is power-packed with corporate meetings and events, has chosen to fill his home with furniture that resonates with his personality. A three-foot-tall Laughing Buddha sculpture greets you the minute you walk through the doors, while the walls in the dining room are lined with candid black-and-white portraits of icons such as Marilyn Monroe and Brigitte Bardot dancing, laughing, engaging in conversation, and simply having a good time. “Life is about the pursuit of happiness,” he says. “I hope to bring a sense of humour, as well as a positive energy to my home. That always acts as a reminder to live my best life.” 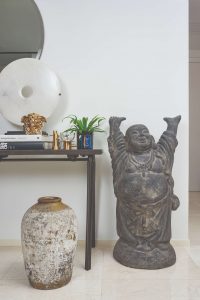 A Laughing Buddha statue at the entrance injects positive vibes

The living room is a vision of bold minimalism meets geometric coherence, where a pair of cream sofas from designer homeware store Gudang captivates upon entering the home, while punchy woven Margo Selby cushions are as inviting as they sound. On the table, a series of Art Basel books serves as inspiration, while the spicy Eclectic Orientalist scent from Tom Dixon permeates the air. The marble-on-marble kitchen looks straight out of a well-curated Pinterest board—walls are made chic with a Tom Dixon stone pendant light, inspired by the majestic marble used to build the Taj Mahal, paired with quirky black Offcut stools from the same designer known for his imaginative and witty take on everyday objects. At this point, I have a pretty good idea of his favourite furniture designer.

“When it comes to decorative objects, I gravitate towards gold and brass. Tom Dixon’s designs are not only iconic, they’re also very current and ‘future’, too. Anti-fashion, transcends time, and still relevant in years to come,” Yun explains. 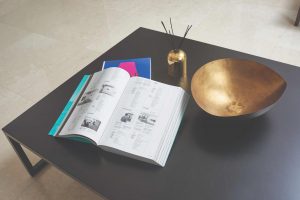 Yun’s innate curiosity and impeccable taste extend beyond his wardrobe and interior choices. His most cherished artwork is one by Chinese artist Yang Xiaojian, who uses the Chinese medium of ink and wash, as well as vivid brushstrokes to question native traditions and Western influence. “I came across his gallery in Shanghai, and had the chance to meet the artist in person. We hit it off instantly, and he even signed a copy of his book for me,” Yun reminisces. “After a little research, I discovered that his works can be seen in the Shanghai World Financial Center, and are collected by the Fondation Louis Vuitton and the National Art Museum of China. Talk about a stroke of fate.” 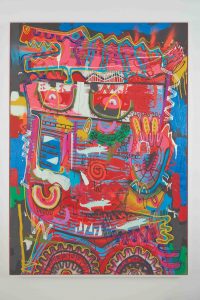 In the hallway, a Basquiat-esque painting of scribbles and graffiti animals add a pop of colour to the monochromatic space. “I was drawn to the liveliness of this artwork by Thai artist Popkapi. The explosion of colours makes quite the impression on a person when they walk through the doors,” he explains. “The pieces in my collection have a personal connection to me. There’s a story and admiration in each artwork, but it should also give you meaning, and connect to some point in your life.”

Yun’s nomadic spirit ignited his passion for fashion during his formative years when he worked for fast-fashion label H&M in New York City after graduating from Johnson & Wales University. “Living in a multicultural place like New York has shaped my world view. I love looking at beautiful things, and I love change. Fashion offers that exciting pace,” he says. After a couple of years in retail powerhouse The Melium Group and a subsequent stint in PR and communications, Yun finally found his calling of marrying luxury fashion retail with events and marketing at Pavilion KL. 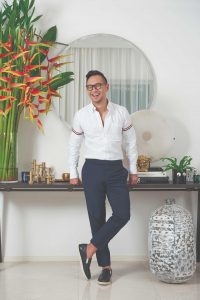 Yun in the living room

“I miss the incredible energy of New York and the diversity of people I got to meet, but the real question that I had to ask myself was, ‘Would you rather be a big fish in a small pond, or a small fish in a big pond?’”

Similar to Madonna, who Yun admires for her multifaceted personality, way of living by her own rules, and her courage of doing things outside the box, Yun, too, possesses the same inimitable spirit. For his Christmas party tomorrow, his Spotify playlist is decked with songs from Madonna’s 2005 Confessions On A Dance Floor album. Yun also jumped on a flight to London in 2015 just to catch her on her final Rebel Heart Tour. “Best of my life!” he exclaims. It’s not just Madonna’s pop anthems that have captured Yun’s heart, but it’s also her power of redefining music as an art form, championing female empowerment in a male-dominated industry.

“It’s important not to conform to a herd mentality and societal norms. As an individual, it’s imperative to be on the lookout for new changes and ideas, in both your career and your personal life,” he says. “Madonna taught me that. She’s an eternal inspiration.”

A-List Parties
The wait is over!