Bad Bunny blasted out of Puerto Rico to lead a global Latin music revolution—and the rapper and singer is bringing his legions of devoted fans along for the ride.

STORY BY BIANCA BETANCOURT AND PHOTOGRAPHS BY JOHN EDMONDS; STYLING BY YASHUA SIMMONS 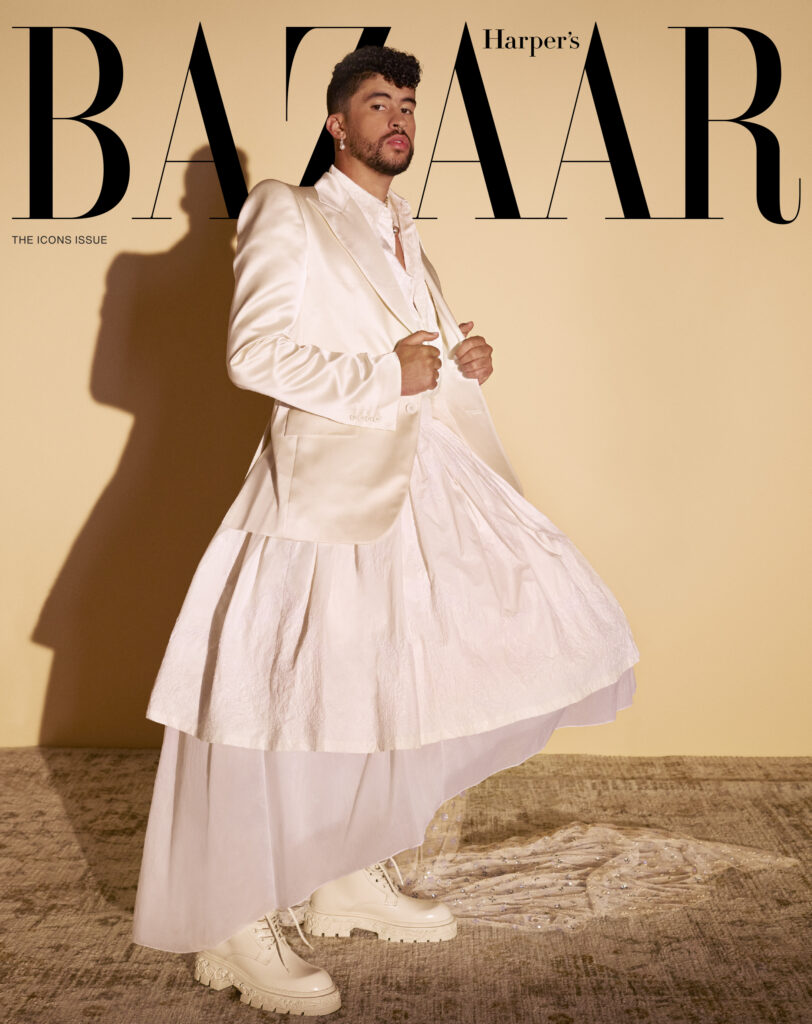 When Bad Bunny was growing up in Almirante Sur, a rural area in Vega Baja, Puerto Rico, he would often go clothes shopping with his mother. “I always remember seeing the pieces in women’s clothing, and they would always fit me so much better, and they had so much different variety,” recalls the rapper and singer, born Benito Antonio Martínez Ocasio. Seated in his office in San Juan, Bad Bunny takes a moment to reflect. “Obviously, as you get older, you start seeing what the world shows you,” he says, “and if I lived my life that way, then I wouldn’t be able to dress in the way that I really want to.” He’s wearing a Marni logo tee, a mini knit beanie, and flashy Balenciaga sunglasses; the mirrored “BB” logo at the temples isn’t custom made, but it might as well be. “To a point, the fame and where I am gives me the confidence to do all of these things.”

That fame Bad Bunny mentions—it’s on another level. This year, Drake, Kendrick Lamar, BTS, and Beyoncé have all released new music. But Bad Bunny’s Un Verano Sin Ti, which dropped in May, has topped them all, with a record 183 million streams on Spotify on the day it was released. In fact, in 2020 and 2021, he was the most-streamed artist on the platform worldwide. 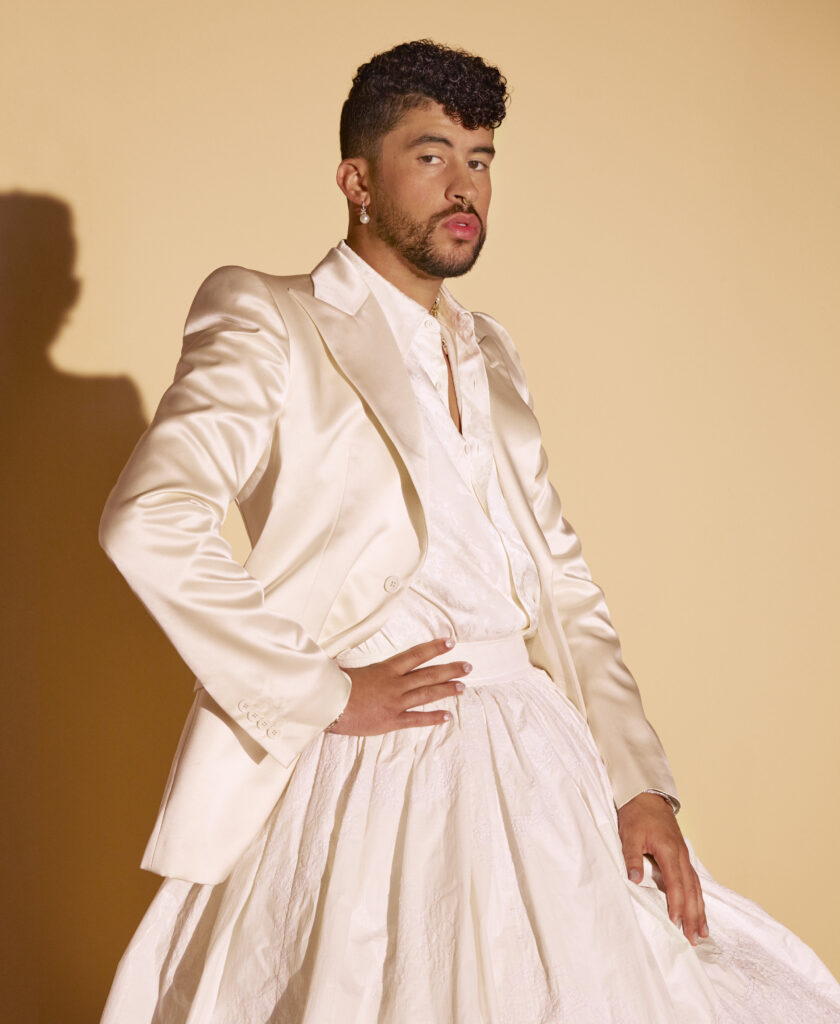 Bad Bunny’s ascendence has become Puerto Rican lore: a young grocery bagger turned SoundCloud sensation who spurred a seismic shift in what reggaeton and trap urbano—the gritty and arguably de facto musical genres of modern-day Puerto Rico—could be. He was born in 1994, the eldest of three boys, to a schoolteacher mother and a truck-driver father. It was just a few years before the so-called “Latin boom” within the music industry in the U.S., when mainstays like Jennifer Lopez, Marc Anthony, Shakira, and Ricky Martin began to impact U.S. radio. Now, at just 28, Bad Bunny has worked with them all, including performing alongside J.Lo and Shakira at the 2020 Super Bowl. And unlike many Latin artists who have courted global audiences, he has never recorded in English.

His songs aren’t just certified bangers, they’re entire musical resets. Shaking ass in a club to his 2020 hit “Safaera” is essentially a Boricua rite of passage, a cultural communion. He has also turned antiquated Latino notions of machismo on their heads, dressing in drag in the video for “Yo Perreo Sola” and writing about subjects like domestic violence (“Andrea”) and island politics (“El Apogón”) with a stark sensitivity; if anything, his self-assuredness and gender-nonconforming style have amplified his appeal.

“The way that he has transitioned into fashion, the way that he dressed in drag in his music video even though Hispanic culture can be a little homophobic—he took that chance, and instead of hurting his career, it made him bigger,” says Cardi B, who collaborated with Bad Bunny and J Balvin on her 2018 track “I Like It.” 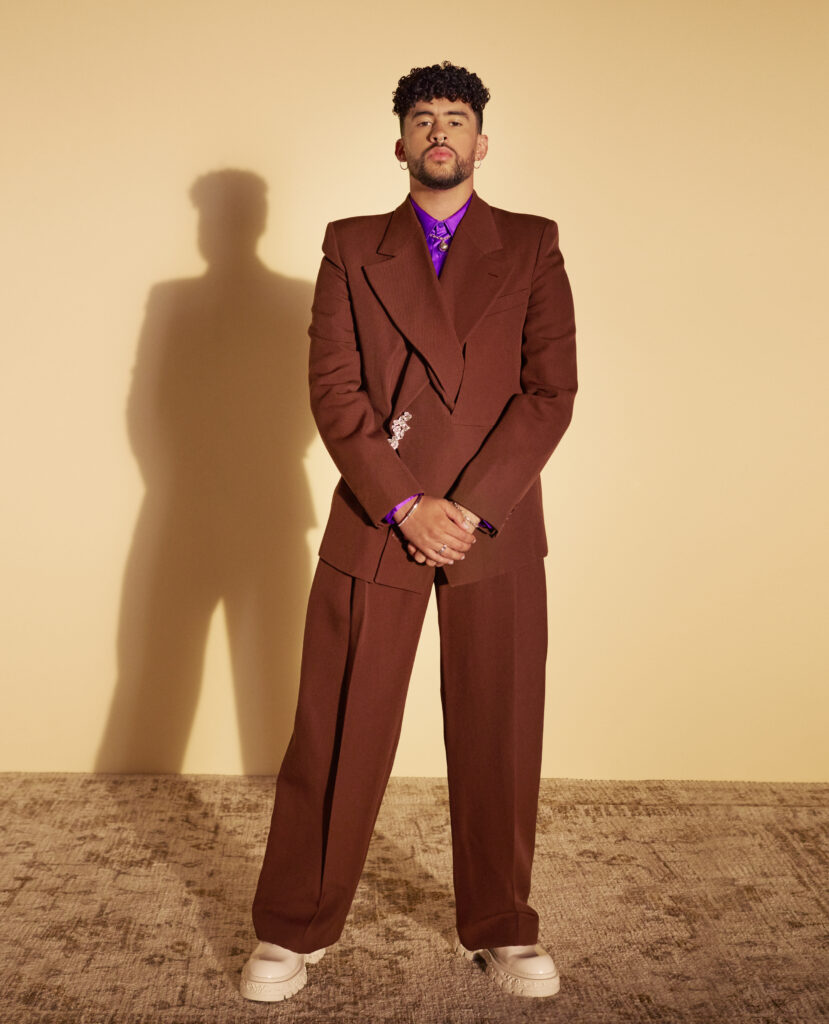 Maybe at the very beginning of my career, I tried to pretend I was someone that I’m not, but I learned that that’s the way artists lose themselves.

“I’m taking advantage of this moment in my life when I can do whatever I want and wear what I want, so I get to live life more authentically,” Bad Bunny says. “I don’t do it to become more famous or to call attention or to disrespect anyone. People on the outside can think that I have a strategy or I wear this to call for attention, but in reality I just know who I am.”

Now he is expanding beyond music, preparing to take on his biggest acting role yet as El Muerto in an upcoming Sony film about the Spider-Man Universe antihero. The movie marks the first time a Latino actor has been tapped to headline a Marvel superhero film and maybe—just maybe—will help usher in the introduction of Miles Morales, the fan-favorite half-Black, half–Puerto Rican Spider-Man. (Morales’s only previous movie appearance was in 2018’s animated Spider-Man: Into the Spider-Verse.) I ask Bad Bunny if the two characters will have any sort
of future onscreen connection. He chooses his words carefully: “It seems like you already know the answer.”

But how does it feel to be one of the biggest recording artists on the planet and reap massive success in a nation that owns and continuously overlooks the island he calls home? “At the end of the day, my success in the United States I owe to the hardworking Latinos who have helped make the country what it is today,” Bad Bunny says. “I highly doubt the type of gringos I don’t fuck with listen to me. Those were all the people at the Super Bowl who were pissed off about how Latino the halftime show was.” 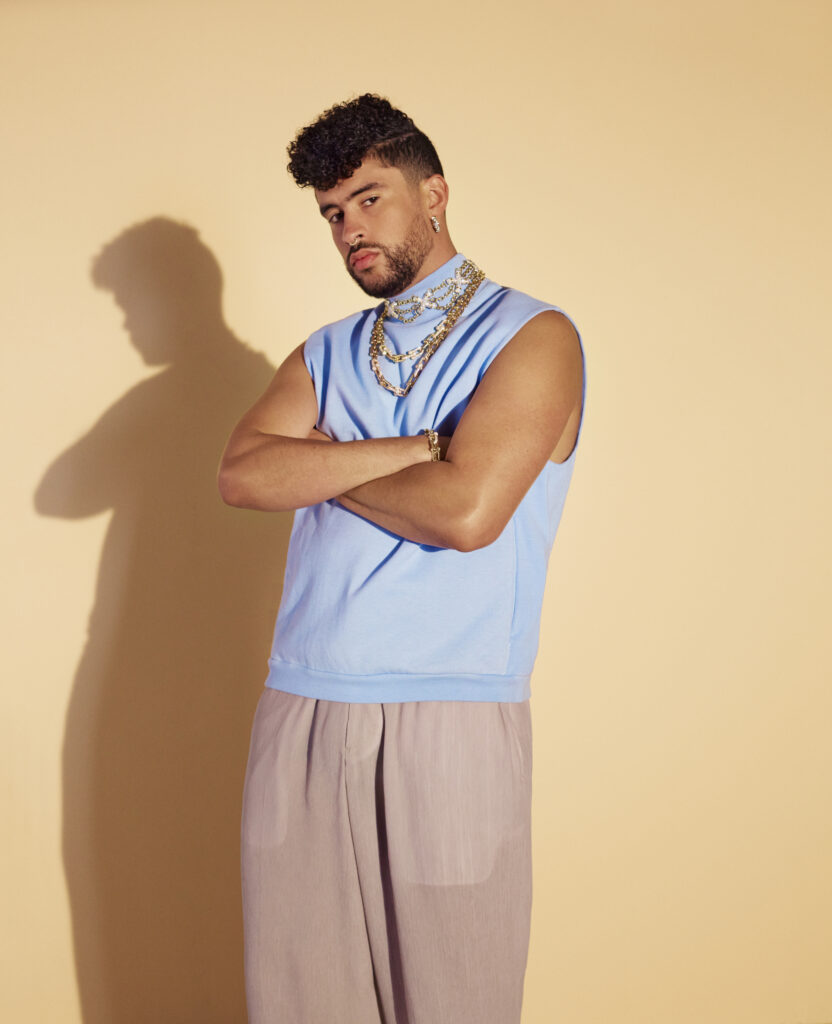 “Maybe at the very beginning of my career, I tried to pretend I was someone that I’m not, but I learned that that’s the way artists lose themselves,” he explains. “It’s because they forgot about themselves—them as a person—and invented a fictitious personality.”

He rises out of his chair and gestures upward with his hands. “Since the beginning, everything has been up and up,” he says. “There comes a moment when you’re like, ‘Diablo, estoy en un nivel muy alto.’ And then the next year comes and you’re like, ‘Diablo!’ By the time I noticed that things were different, it didn’t really affect me. It may change things around me, but I stay the same. Soy un normalito. I am who I am.”

Bad Bunny has reinvented the art of the crossover, but he’s still processing what that means. “[This is all] for more than just myself, but also for the fans and for all of the Latinos in the world,” he says. “I get emotional thinking about it … and I see it from the outside. If it wasn’t me but it was another artist, I would feel just as proud for them too,” he says with a laugh. “But obviously it’s more exciting that it is me.”

CHECK OUT THE REST OF OUR BAZAAR 2022 ICONS HERE.