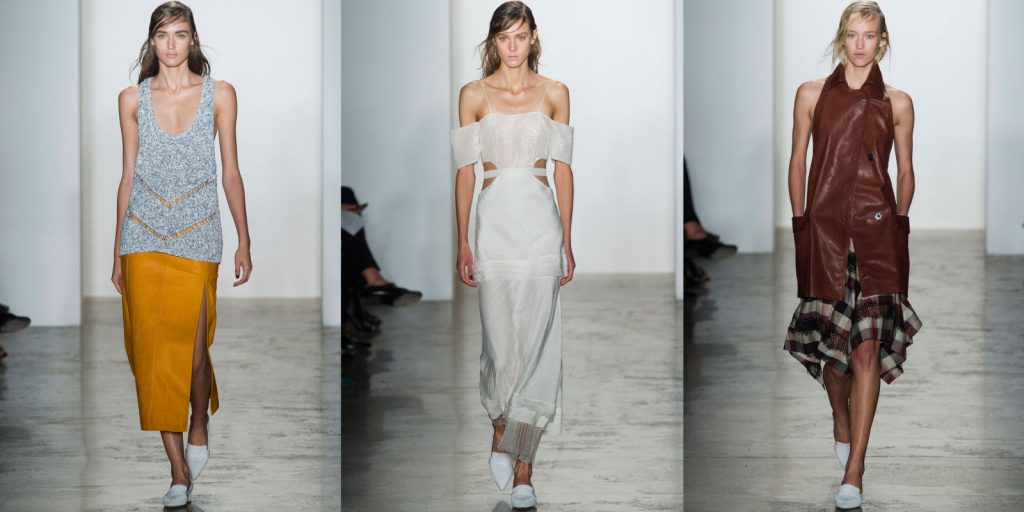 Wes Gordon has a love affair with the ’90s, consistently reinventing the era of slip dresses since showing his first collection for Spring 2011. For Spring 2016, that meant looking at Winona Ryder’s particular brand of delicate cool through a modern lens. From plaids to black lace, striking yellows and chain mail skirting, it’s a collection of unabashed luxury with an inherent simplicity.

HB: What was your mindset for the season?

WG: You know it’s almost kind of accidental. I think for me I try to walk a line between feminine and modern, you know, and create clothes that aren’t super precious, but at the same time aren’t sterile. And that happened really well in the ’90s. The slip dress felt sensuous, it felt like it had a soul. And I’m trying to create clothes now that feel like they have soul.

HB: How did Winona Ryder embody that?

WG: I think she’s very demure, very feminine, almost a little fragile, but at the same time, had this coolness and this kind of irreverence for the rules of fashion.

HB: There’s a great simplicity to your pieces, but the detail is always so strong. Is that something that’s important to you?

WG: Definitely. I think in this era of fast fashion and clothes everywhere, you want to make something more special and it has to really look it and look like a lot of thought and work went into it, and people spent a lot of time making it beautiful.

WG: I think it’s almost less about having a customer base and more about having finally figured out and pinpointed and articulated what I think is beautiful and who I am as a designer. Which is a hard thing to do when you start off as a 23-year-old. You kind of zig and you zag, but I’d say it’s really been quite cohesive. My hope for the show is that you come and that you say it was very Wes, and it was also very new.

HB: What’s the biggest thing you feel like you’ve learned since your first presentation?