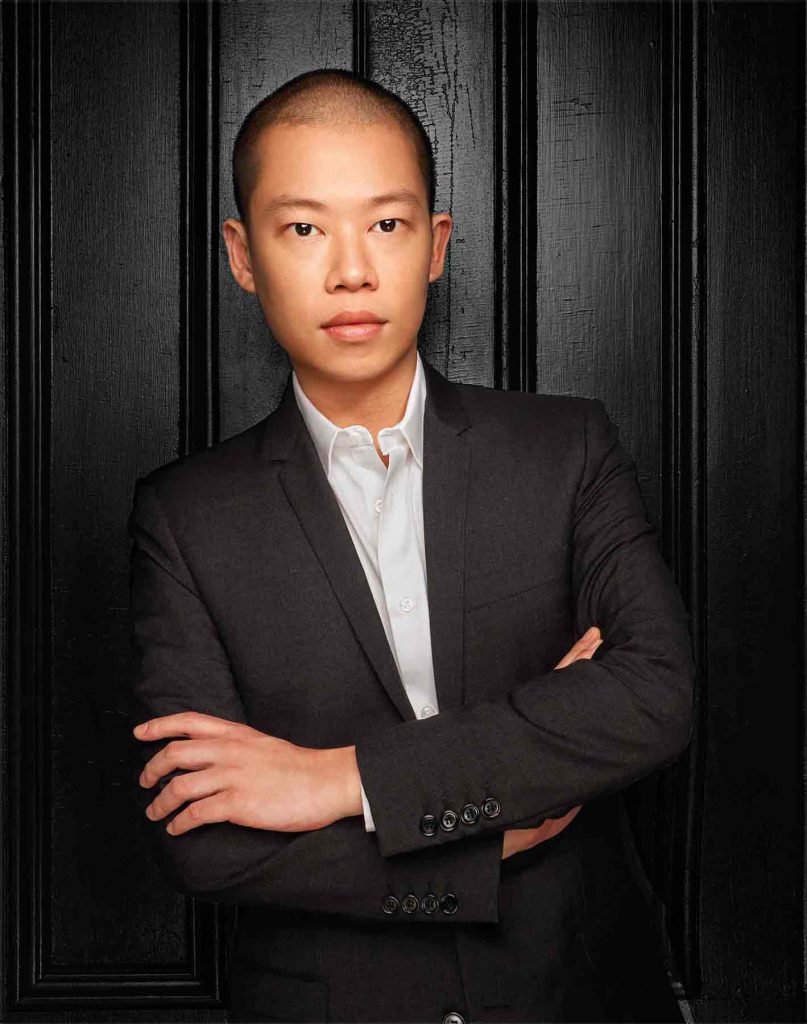 7.30AM When I’m in Germany for Hugo Boss, I stay at this hotel in the town of Metzingen, where the headquarters is. I’m not the best morning person. I set the alarms on my Jason Wu phone and my Hugo Boss phone, and generally use each snooze button three times. They’re all synchronised, just in case one doesn’t work. I use the alarm that sounds like a fire truck. It has a sense of urgency: Get up! Get up!

7.45AM I get up and take a shower. I like Kiehl’s products because there isn’t any smell, and I use the facial exfoliator from Caudalíe. I’m really fast getting ready. I have no hair, so I don’t have to style anything. As a designer, deciding what to wear is the last thing you want to think about; my uniform is a jacket, a T-shirt, jeans, and trainers. I have a bunch of Hugo Boss blazers, tons of tees from A.P.C. and Margiela, and then basic Levi’s and Converse, or I have Boss trainers in three colours. I’ve been wearing white Converse for 10 years – they can’t get old. I have, like, 10 pairs. When they’re dirty I throw them away. I can’t pull off dirty Converse; there isn’t a tinge of grunge in me. Then I have a cup of coffee, black, and start my day. I’m not a breakfast eater. I feel like some people are religious about it, but I like lunch.

8.30AM In the great German tradition, my day is planned to the minute. When I get to the office, I check my iPad and mentally prepare. It’s kind of a marathon starting then. I catch up with my German assistant, who’s Japanese, then make the rounds of the office and catch up with the team. I’m notorious for going through people’s desks to see what new things they’re working on. I love the creative process, so when I see a nice swatch on somebody’s desk I grab it. I’m one of the first ones to get there so I can see what everyone’s working on. I hate clutter, so I’m really good with a German assistant. Some people are really great at chaos, but I’m not. I can’t stand it when there are unread messages on the phone – it’s like this OCD thing I’ve developed. The Boss campus looks like the set of Gattaca. It’s perfectly manicured, all of these modernised glass buildings situated in the middle of the town, which is pretty suburban – a lot of green. The contrast was kind of what initially drew me to Boss, that juxtaposition between architecture and nature. Most days I spend time in three different buildings: D15, D12, and D19. It’s very sci-fi. I’m in what they call the technical development centre a lot, which is the German version of the atelier. My office is in D12 – on my floor is design, brand management, and merchandising – and then D19 is communications, marketing, and the art department. I kind of migrate through different buildings to do different things.

1PM I don’t usually take a lunch break, so the campus cafeteria delivers my “Jason lunch”. You know how in Europe, especially Germany, a sandwich is either, like, a piece of cheese or a piece of ham but not both? I got them to do a special one with prosciutto, cheese, and lettuce on a sunflower-seed roll. They now sell it – we’re starting a trend. In the afternoon we do anything from approving campaigns to retouching images to looking at designs for the catalogue and show invites. The other thing I do is look at the fragrance, concept names, ideas, who we’re going to use for models, photographers. I did a shoot with Edie Campbell here on campus for the Resort 2015 look book. She’s an amazing, amazing girl.

9.30PM I leave the office between nine and 10. In Europe, dinner is a prerequisite, so I eat with colleagues or friends. My favourite restaurant here is an Italian place called L’Angolo. They bring out this huge cheese wheel and put the pasta inside. I’ll have a glass of wine; I’m a sauvignon blanc kind of person.

11PM I go back to my room and stay up for three or four hours so I can spend time on the phone with the Jason Wu team back in New York when they’re up and running.

2AM I talk to my mum every week. She’s an inspiring woman, and she’s supported me since I was little. She bought me my first sewing machine when I was nine – kind of an unusual request from a nine-year-old boy. And she never second-guessed it. She has the biggest Jason Wu archive, everything from drawings from when I was five to sculptures I made when I was nine. Mothers always keep the best archives. I don’t really collect anything, but I buy maybe five books a week. I like to read things that have nothing to do with fashion. And I love cookbooks; I have about 30. There’s a really good one called The Blackberry Farm that my friend Leslie Fremar gave me. Right now I’m reading this Scotty Bowers book, Full Service. It’s all very scandalous – it’s about this guy’s trysts with Hollywood stars and everyone from the Duke of Windsor to … It’s quite impressive. I have two cats, sisters named Jinxy and Peaches. They’re so cute. My boyfriend takes care of them when I’m away – they’re our babies. I’ve had a cat since I was studying at Parsons. One of my classmates came to school and was like, “Help, my cat just gave birth. I didn’t even know she was pregnant.” Just like the reality show – it’s crazy. It’s like “Oh, I just have a really bad stomach cramp.” And next thing you know there’s a baby. I haven’t been as good lately about watching reality TV; I’m a little behind. I’m obsessed with this new make-up app called Makeup Genius. It’s hilarious, and everyone I know sends me cat videos – everyone.

3AM I always have a difficult time going to bed. I’m just very hyper and very focused. It’s hard to turn it off. I fall asleep with the TV; everything’s dubbed in German, so I put on a random channel with a movie I recognise. Maybe subliminally I’ll learn German that way. My favourite shows are Scandal, Orange Is The New Black, and The Good Wife. And, weirdly, I love Bizarre Foods, with Andrew Zimmern. It’s about weird foods globally, and being from Taiwan I’ve had every single kind of intestine. German food is very normal, I think. It’s quite hearty. My colleague lives in the Black Forest and has yet to bring me a Black Forest cake. I’m such a dessert person. I’m trying to be on a low-carb diet and low-sugar diet, but I’m just saying that. I always take the direct United flight to Germany, and they give you an ice cream sundae at the end of the meal. Always. It’s hard to not have it. The plane is where I catch up on movies. I saw Iron Man 3 and the new Captain America – I love an action movie. I love Melissa McCarthy movies and comedies in general – I just saw The Heat – and horror movies. I grew up with Child’s Play; interestingly enough, I ended up in the toy industry later. My other favourite is Death Becomes Her. I watch it every time it’s on HBO. It’s through fashion that I get to meet really different people and do different things. From meeting RuPaul to meeting senators to having a schnitzel in Germany, I can say that life experiences have been quite full as of late.