Hailey Bieber has been thrown some curveballs this year, including a serious health scare. But the model, style star, and newly minted beauty mogul has proven she can roll with the punches.

BY RACHEL TASHJIAN AND PHOTOGRAPHS BY JOHN EDMONDS; STYLING BY SAMIRA NASR 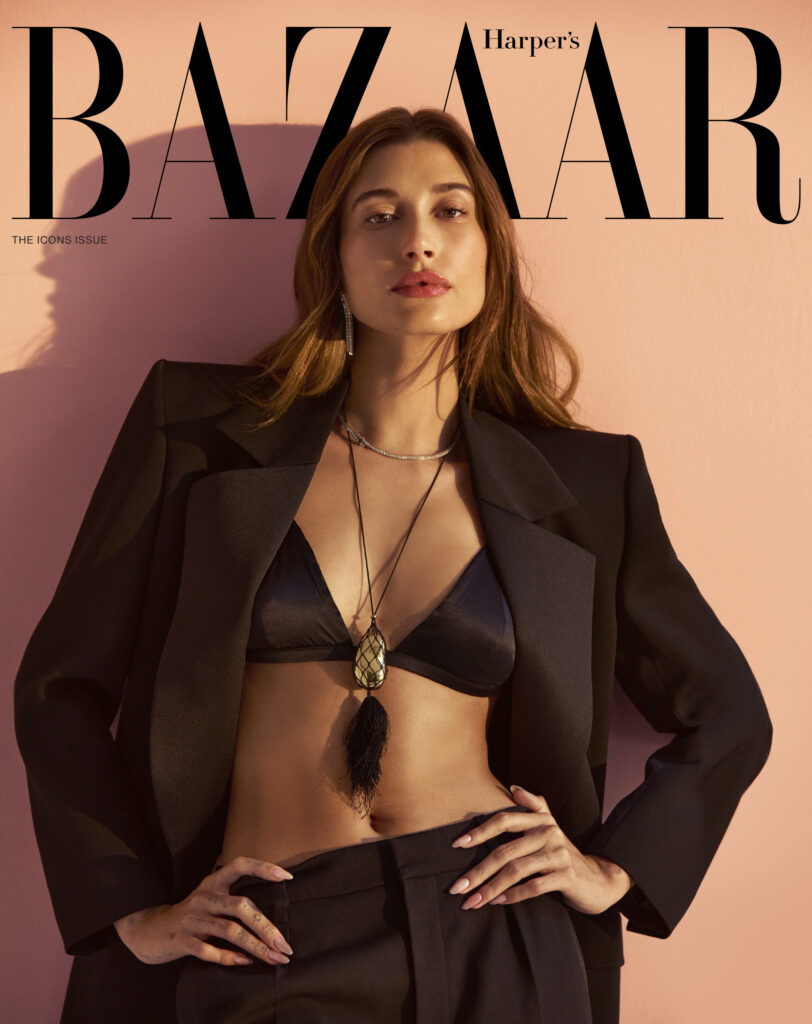 Hailey Bieber is one of the best-dressed women alive, in part because she’s so willing to mess up. “I look back on things that I’ve worn and I literally am so embarrassed. I’m like, what was I thinking?! That was such a miss,” she tells me from Idaho, where she and her pop-superstar husband, Justin Bieber, have disappeared for a mini vacation. It’s a surprising confession for someone who telegraphs such confidence, whether she’s going to the gym or Oscars parties and whose style is so obsessively chronicled. Embarrassment, though, is different from regret. “I’m never afraid to try anything. I think that just goes to show that there’s a moving evolution [in my style]. It just keeps growing. Which is kind of how I want to be in all areas of life.”

Bieber, who is 25, describes herself as “a very regimented and routine person.” She grew up a Hollywood kid, the daughter of actor Stephen Baldwin and Brazilian-born Kennya Baldwin, and trained as a ballerina. Yet part of what makes her so successful is her ability to deal with change. In the past year, she went through a personal health trauma, experiencing a strokelike episode from a blood clot in March. Then in June, Justin was diagnosed with Ramsay Hunt syndrome and experienced facial paralysis, which led him to postpone the rest of his 2022 tour in the U.S. That same month, Hailey launched a skincare line, Rhode (her middle name), which had been in the works for more than two years and is already winning kudos from discerning beauty fanatics.

Her vision of marriage is paradoxically progressive. Many people in their 20s and 30s see matrimony as something one does once life has reached stability, but Bieber, who wed at 21, sees it as only the beginning: You don’t figure things out and get married but rather get married and figure things out. “I just think life is changing all the time,” she says. “Day to day, week to week, year to year. I think a perfect example of that is over the last six months, both of us have gone through very serious health issues. You have to figure out how to deal with this shit as it comes, you know? There’s a reason they say ‘for better or for worse.’ Like, that’s for real!” 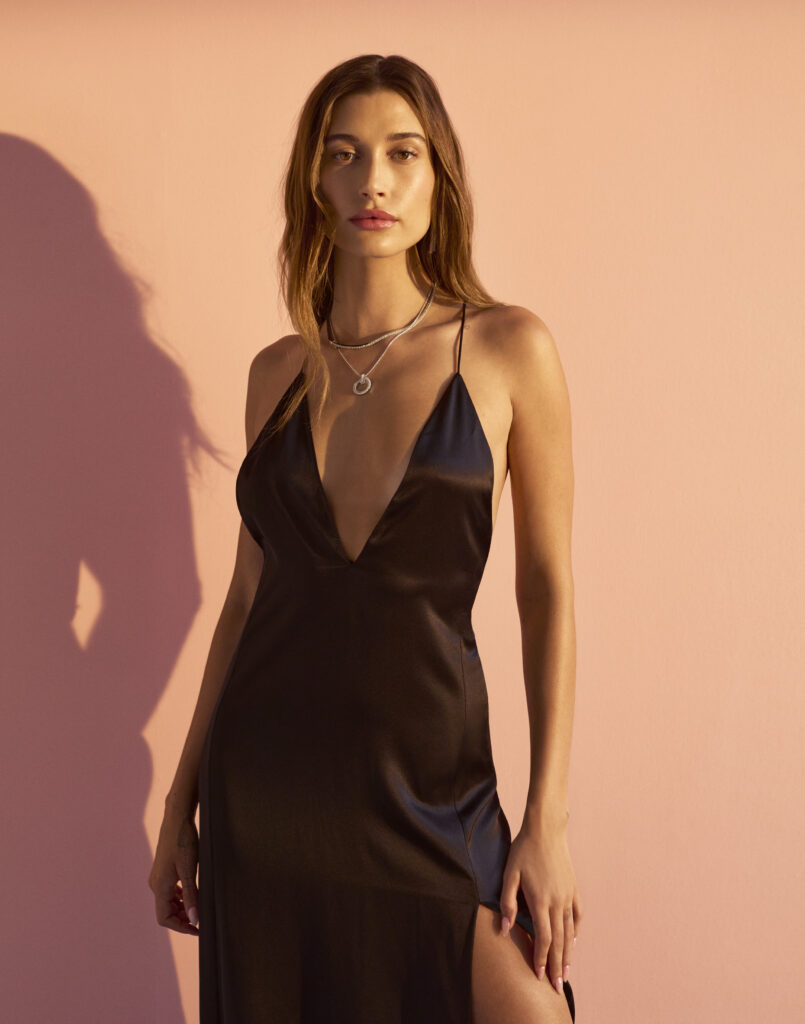 I’m never afraid to try anything. … Which is kind of how I want to be in all areas of life.

That same figure-it-out-as-you-go approach seems to apply to the way she dresses. She says her style “evolves every couple of months,” but what makes her look singular is her meticulousness and willingness to take chances. Her hair, nails, and skin are always done in an impeccably pared-down way, which creates a restrained elegance around even the most thrown-together look. She also actively seeks out new designers—often years before they appear on the celebrity radar. She is a muse for ERL, the brand founded by buzzy designer Eli Russell Linnetz, and was an early fan of Martine Rose, whose name has been floated as a potential successor to Virgil Abloh at Louis Vuitton. (Abloh famously designed Bieber’s wedding dress.)

“She’s one of the most stylish women I know,” says stylist Karla Welch, who has worked with Justin for years and Hailey for red-carpet appearances. “I recently went to an event, and everyone looked like her. That’s how powerful and influential she is.”

Yet Bieber is a street-style individualist. She looks fabulous in the usual influencer uniforms, like oversize greige suits and the yassified Princess Diana après-gym ensemble of baggy T-shirt, barely there bike shorts, and sneakers. But she also wears things that are truly steeped in self-possession: a sheer white Coperni lace dress with funky little rosettes, weird jeans by Eytys, or a Jean Paul Gaultier look from his 1990s golden age. Her style is not the effort of a well-assembled team but the joyful expression of a true clotheshorse who peruses the men’s department (that’s how she discovered Rose) and scrolls sites like Ssense. 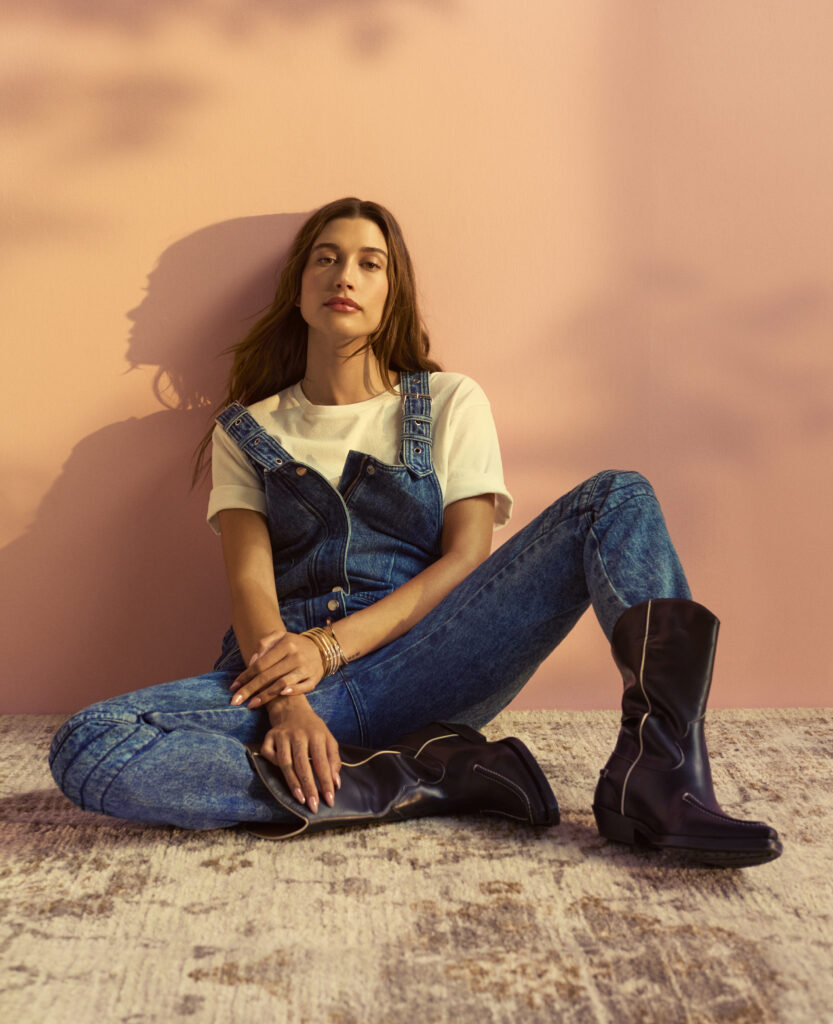 Though Bieber’s looks are hypercontemporary, her approach is ultra old-school. She dreams up different “vibes” (to use her favourite word) for trips and events, whether it’s a vacation in the Northwest or a friend’s wedding. Her process is true fashion-icon behaviour. In fact, it recalls that of Diana, to whom Bieber paid tribute in a magazine shoot in 2019 and who also made carefully considered fashion choices with whimsy and ease. “I was really inspired by the fact that she was the most-looked-at woman in the world at that time, of all time, and she did what she wanted with her style,” Bieber says of the late princess. “She really expressed herself through her style despite being in the position she was in.”

Diana’s status as a paparazzi target also resonates with Bieber. She admits that getting dressed sometimes makes her feel anxious, in spite of how much she loves it. “I get photographed so much that I feel like sometimes I put pressure on myself.” In part, it’s her own perfectionism. “Even if I’m just throwing on jeans and a T-shirt, I want it to be a dope pair of jeans and a great T-shirt!”

Bieber always puts in the effort—in fashion and romance. The day we spoke marked four years since she and Justin got engaged. “He’s still the person that I wanna be rushing back to,” Bieber says. “I might fly somewhere and go do a job, but I can’t wait to come back and hang out. And I feel like that’s because of the effort that’s been put in on both sides. At the end of the day, like, he’s my best friend, but it still does take a lot of work to make it work. And then I know eventually when kids come in the picture, that’s going to be a whole other season of navigating how to make that work.”

Whatever comes, she’ll have the right attitude—and look—to take it on.