Florence Pugh Is Just Being Honest

Florence Pugh’s greatest gift as an actor isn’t her ability to reveal the essential truth in a character. It’s that she comes by it honestly.

STORY BY ANDREA CUTTLER AND PHOTOGRAPHS BY JOHN EDMONDS; STYLING BY KELLY-ANN HUGHES 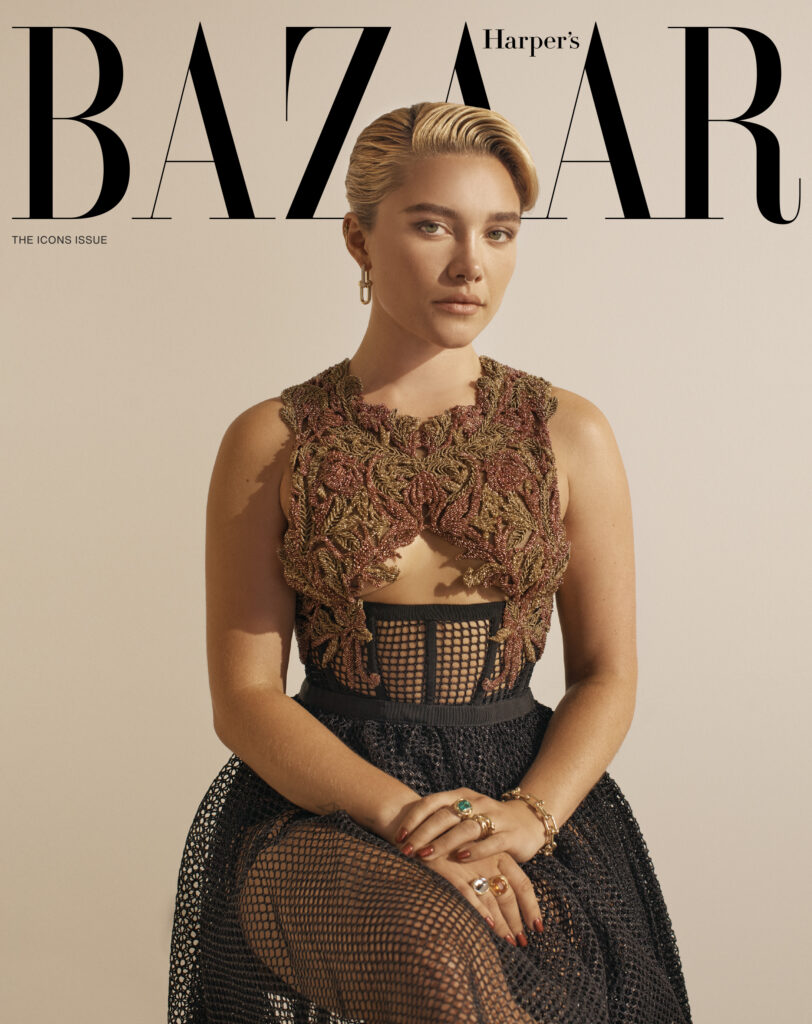 Florence Pugh knew it was going to be a thing. At Valentino’s couture show in Rome this past July, the 26-year-old British-born actor wore a Barbie-pink gown with layers of tulle and a completely sheer top. Working with designer Pierpaolo Piccioli and his team, Pugh approved the removal of its lining, eliminating any confusion over the intentionality of its transparency. “I was comfortable with my small breasts,” she tells me while sipping a glass of rosé from a cozy hotel room in the English countryside. “And showing them like that—it aggravated [people] that I was comfortable.”

Pugh received a deluge of internet nastiness. “It was just alarming how perturbed they were,” she says. “They were so angry that I was confident, and they wanted to let me know that they would never wank over me. Well, don’t.” Pugh expanded on this sentiment on Instagram, excoriating her body-shaming trolls: “Why are you so scared of breasts? Small? Large? Left? Right? Only one? Maybe none? What. Is. So. Terrifying.” The post has now been liked more than 2.3 million times. 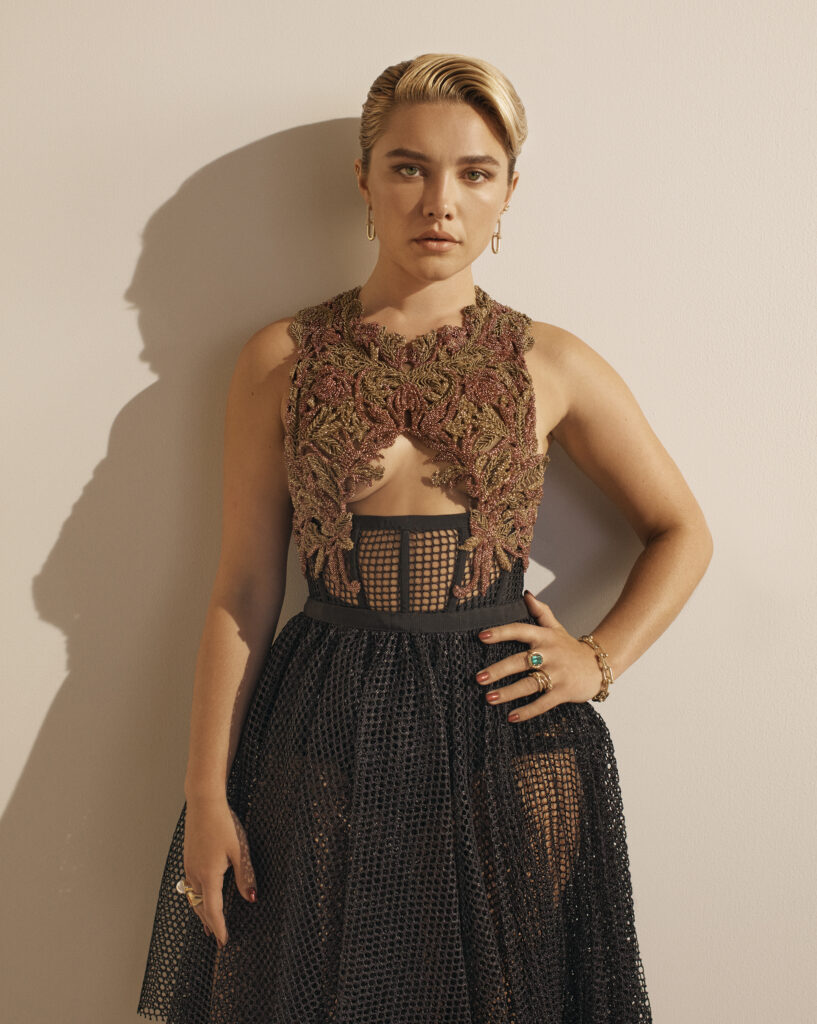 “I feel like I am now getting into this groove in my career where I know what I can take, what I can give, and what I will not accept anymore.”

Fans have come to expect this kind of no-BS fiery candour from Pugh. Since making her big-screen debut in 2015 as a teenage girl reckoning with her own sexuality in Carol Morley’s The Falling, she has built a career playing women who refuse to be silenced. Over the past seven years, she’s acted in almost two dozen projects, including her breakout performances in a pair of 2019 films, Ari Aster’s indie horror hit Midsommar and Greta Gerwig’s adaptation of the beloved classic Little Women, the latter of which earned her an Oscar nomination for Best Supporting Actress.

She has established herself as one of the most fearless, versatile talents of her generation—that rare actor who manages to both disappear into a role and still exude a singular star wattage. “I guess all of my movies have that element of women being forced into a corner, forced into an opinion, forced into a way of life,” Pugh says. “And then finally something cracks.”

It’s an apt description of Pugh’s character, Alice Chambers, in her latest movie, Don’t Worry Darling, a psychological thriller in which Pugh stars alongside Harry Styles and the film’s director, Olivia Wilde. Don’t Worry Darling is set in an idyllic desert town in the 1950s where every male resident works at the mysterious Victory Project. The women spend their days in a housewife loop: vacuuming and doing laundry, ballet lessons and shopping, poolside martinis and preparing multicourse dinners. After one of the wives disappears, Alice begins to question everything: what they’re all doing there, where their husbands really go, her own reality. 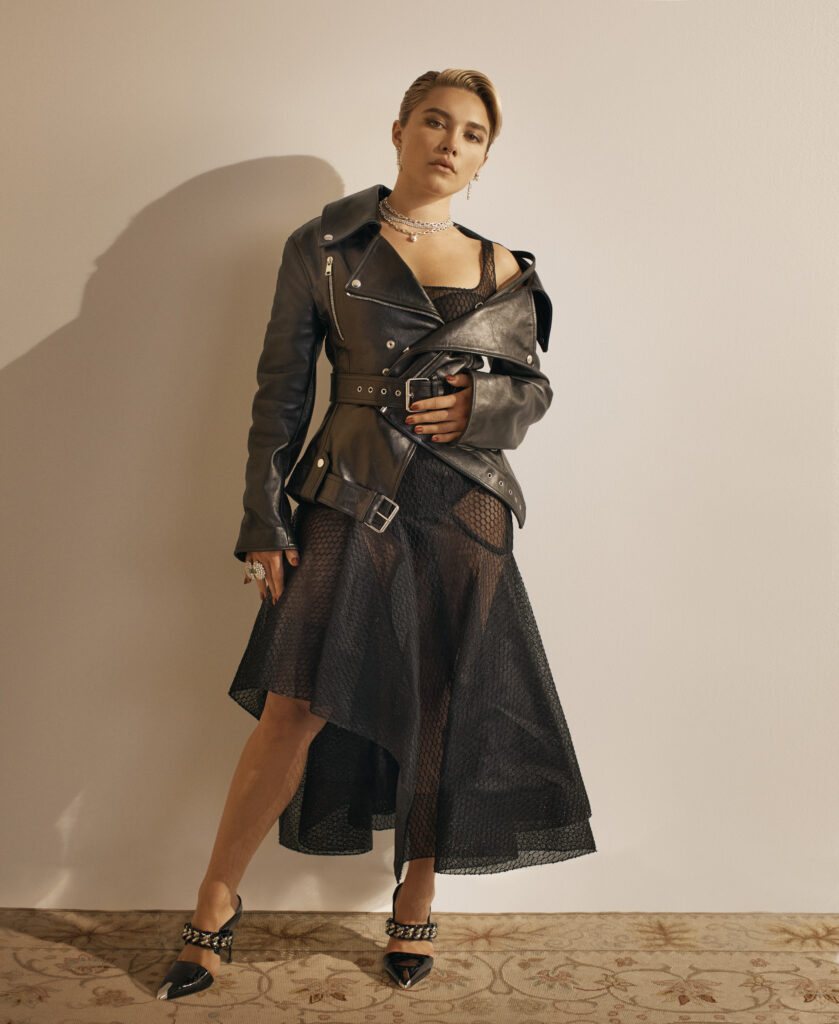 Gossip sites and Styles stans have breathlessly tracked every little morsel about Don’t Worry Darling since production began in the fall of 2020. After Wilde and Styles became romantically linked, the internet went into overdrive. When the trailer debuted in May, the sex scenes were predictably what was seized upon. “When it’s reduced to your sex scenes, or to watch the most famous man in the world go down on someone, it’s not why we do it. It’s not why I’m in this industry,” Pugh says. “Obviously, the nature of hiring the most famous pop star in the world, you’re going to have conversations like that. That’s just not what I’m going to be discussing because [this movie is] bigger and better than that. And the people who made it are bigger and better than that.”

Pugh grew up in Oxford, England, where her father is a restaurateur and her mother is a former dancer. She acted in plays in school and performed at her dad’s cafés but never had any formal training; she responded to an open casting call for The Falling at her mom’s behest with a video audition, recorded on her phone.

The low rasp in Pugh’s voice is the result of a condition called tracheomalacia, which can cause recurrent bronchitis and upper respiratory infections. To safeguard her health, Pugh spent the early part of the pandemic on lockdown in Los Angeles, seeking refuge in the warmer weather and spreading joy across Instagram with her “Cooking With Flo” videos. Nevertheless, she was itching to get back to work. “Part of the reason we all do this is because we run away with the circus,” she says. “I think that one of the pulls for me is that I get to see places, see people, befriend people, fall in love with people, and then move on and do it again.”

Of course, the circus can take on a life of its own. When Pugh and actor-director Zach Braff began dating in 2019, much was made of their 21-year age gap. It was an experience that Pugh found cruel and invasive. “Whenever I feel like that line has been crossed in my life, whether it’s paparazzi taking private moments, or moments that aren’t even real, or gossip channels that encourage members of the public to share private moments of famous people walking down the street, I think it’s incredibly wrong,” she says. “I don’t think that people, just because they have this job, that every aspect of their life should be watched and written about. We haven’t signed up for a reality TV show.” 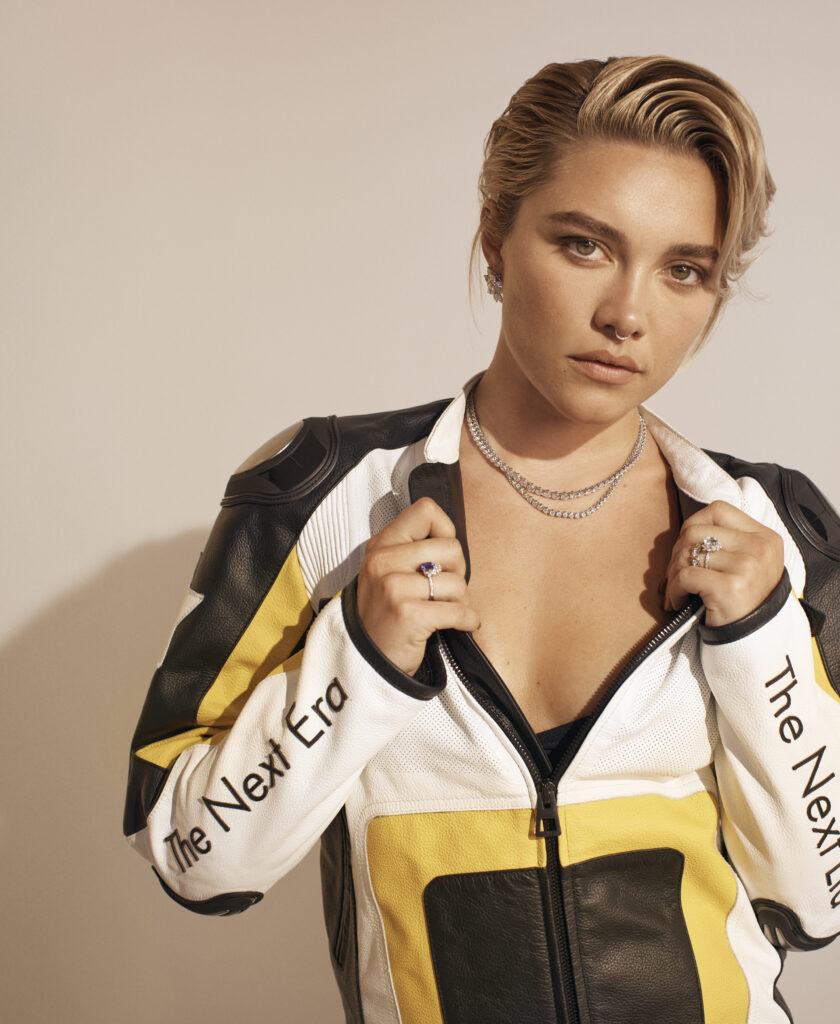 “I don’t think that people, just because they have this job, that every aspect of their life should be watched and written about. We haven’t signed up for a reality TV show.”

Pugh and Braff quietly ended their relationship earlier this year. “We’ve been trying to do this separation without the world knowing, because it’s been a relationship that everybody has an opinion on,” Pugh says. “We just felt something like this would really do us the benefit of not having millions of people telling us how happy they are that we’re not together. So we’ve done that.”

Before the breakup, the pair collaborated on A Good Person, due out next year, about a young woman who has to pick up the pieces of her life after a sudden tragedy. Braff wrote the script with Pugh in mind. “The movie that we made together genuinely was probably one of my most favourite experiences,” says Pugh. “It felt like a very natural and easy thing to do.”

It also helped her realize how she wants to work going forward. “I feel like I am now getting into this groove in my career where I’m knowing what I can take, what I give, and what I will not accept anymore,” says Pugh, who also appears this fall in Sebastián Lelio’s sweeping Netflix film The Wonder, just wrapped work on Christopher Nolan’s Oppenheimer, and began shooting Denis Villeneuve’s Dune: Part Two over the summer. “Being on these last few movies with some of the greats has been truly a wonderful way to kick myself back into the mode of ‘This is what you want to do.’ ”

Still, some at least have remained unfazed by all the buzz. “I went to see my gran, and she goes, ‘So what’s all of this business about your nipples, then?’ ” Pugh recalls. Pugh showed her a few photos. “She gasped,” Pugh says. “Because the dress was so beautiful.”