Jonathan Liang: The Designer is In 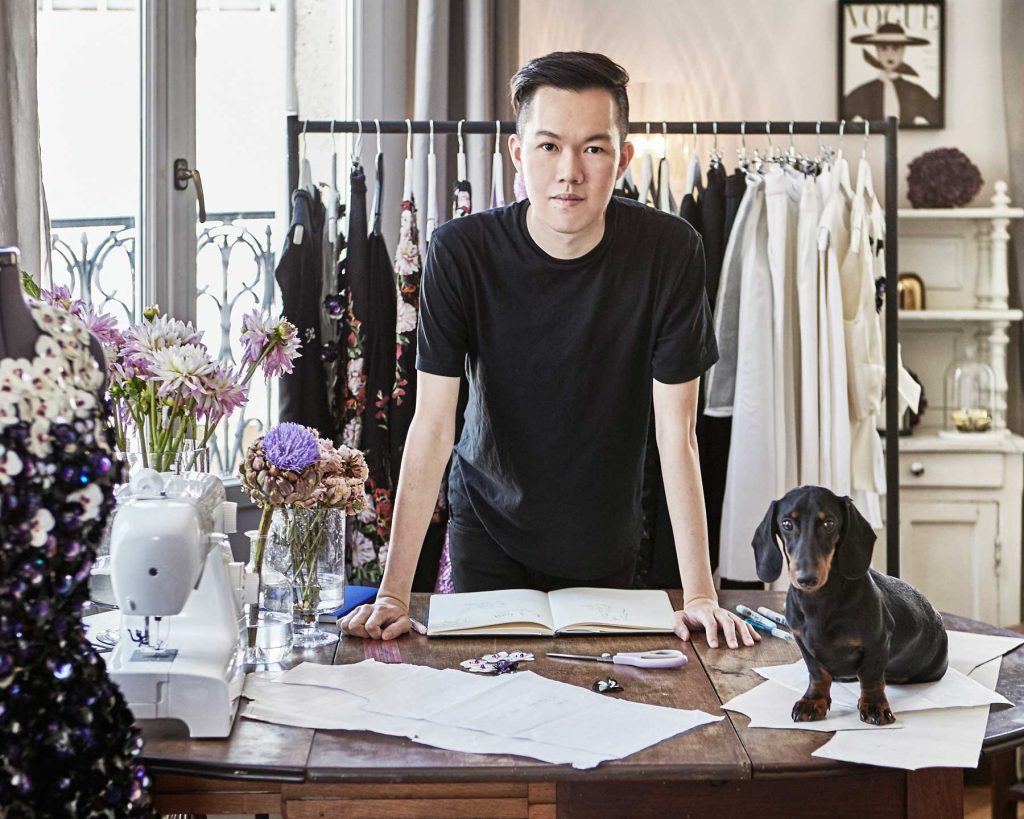 Jonathan Liang at his apartment in Paris

“The dream was to be an explorer, if that is even a real profession. And all my destinations were non-existent, but those were the most adventurous times of my life,” says Jonathan Liang. The Malaysian designer, currently based in Paris, may not have accomplished his dream of becoming an explorer, but he is on an adventure of a lifetime with his burgeoning fashion career. Carving out a magnificent collection every season, his next destination is to dominate the fashion industry.

The Devil Wears Prada Was A Huge Lie

With his über-cool, all-black uniform that consists of a black T-shirt paired with black trousers, Liang, who describes his aesthetic as “contradictory and rebellious,” begun his journey with a degree in fine arts at The One Academy. Thereafter, he was in search of another form of artistic expression, something wherein he could transform into a lifestyle element. That was the beginning! “Fashion school taught me a lot about techniques and the process of creating a design. I learned from some of the best lecturers in our country and I am indebted to them,” explains Liangabout his years in Raffles College KL. “Going back to school to study fashion molded me to become a designer that understood the intricate business that goes on behind closed doors, from creating a brand to managing designs and more.”

His perception of the industry has changed from when he first started out. “The Devil Wears Prada was a big lie because the fashion industry really isn’t that dramatic and self-absorbed. And nobody wears heels everyday, all day!”

“I moved to Paris because we wanted to find a base to establish the overall branding of the Jonathan Liang label, and also for good weather,” laughs Liang. “The energy and eccentricity of the Parisian culture and the underground scene expand the imagination to think beyond. You’d find me in either a bookstore, Café Flore, or at the Buttes-Chaumont Park when I need to relax and get away from the noise. The first time I showed my collection in Paris, I was a ball of nerves. It’s not just the presentation that makes me nervous, but the feedback we received the very next day as well. I’ve always been a nervous person when it comes to presenting my work, it’s a wonder why I don’t suffer from anxiety attacks. But this sort of thing, keeps the adrenaline pumping each season, and it’s a thrill. The atelier is where I live and work, and everyone is like family.” The Jonathan Liang brand was established in 2012 with the belief of inspiring women to inspire others, and that a ’90s throwback is always a great idea. Paris has been an amazing ride, but the Jonathan Liang label is moving on. “We are planning to move the studio to New York next year. This change comes as we want to try and explore a different market for our brand,” says Jonathan about his next exciting adventure.

If Madonna’s “Papa Don’t Preach” is playing on the airwaves, you would surely find Liang dancing to the ’80s hit, for it’s the one song the designer says that will get him on his feet. Alber Elbaz once said, “Be big in your work, be small in person,” and that is exactly how Jonathan Liang lives his life. “I try not to let anything get to my head and own up to every mistake I make,” explains Jonathan. After signing up to helm Dude & Duchess Malaysia, in addition to his own label, Jonathan spends almost equal amounts of time in both Malaysia and Paris. “It’s like I never left KL!” laughs Jonathan. “The scene in KL is interesting. It’s great to see Malaysians putting an effort in dressing up, and it truly reflects who you are and how you want to be seen. The fashion industry worldwide has changed, if anything, for the better. I guess someone from every decade would say that fashion during their era was golden. For us, the time is now.”