The 10 ’80s Film Every Fashion Girl Should Watch 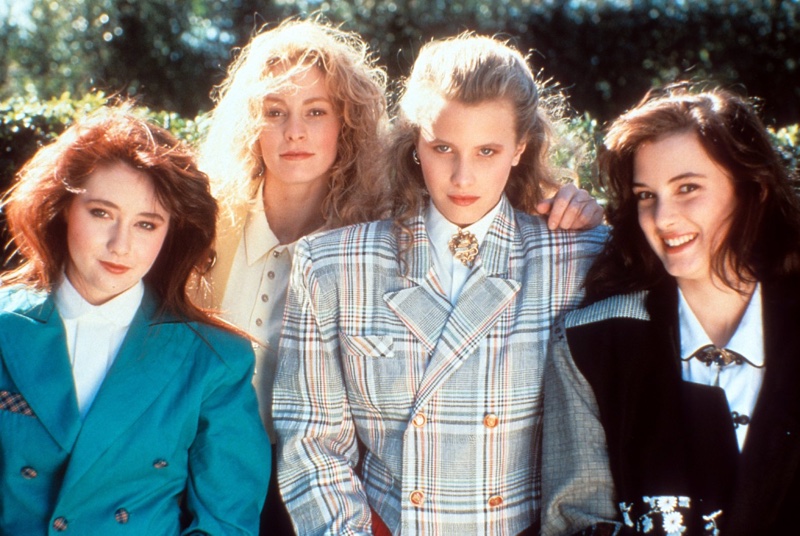 Fashion and film have always gone hand in hand, whether it’s a designer taking inspiration from a movie’s wardrobe or a leading lady sporting the latest couture. BAZAAR is rounding up the most important movies by decade—from the 1950s to today—that every fashion lover should see. Here, the defining cinematic style that shaped the over-the-top decade of the ’80s—from the big hair to the even bigger shoulder pads.

#1. Fast Times at Ridgemont High, 1982
Tapping into those high school stereotypes, there’s sartorial inspiration for everyone in this film—the surfer, the skater, the prep and the bombshell-next-door. While Sean Penn and Jennifer Jason Leigh’s characters [Jeff Spicoli and Stacy Hamilton] had their own look, the standout style moment of the movie was Phoebe Cates emerging from the pool as dream girl Linda Barrett in that infamous red bikini. The movie moment is one of the most iconic bathing suit scenes of all time—and will make you want to go out and buy a red bikini for your next afternoon by the pool.

#2. Heathers, 1988
Acting as the Mean Girls of the ’80s, Winona Ryder, Shannen Doherty, Kim Walker and Lisanne Falk star as the popular, catty clique of their high school. Aside from the dramatic high school gossip and antics, the film’s fashion epitomized that of the ’80s: shoulder pads, boxy blazers, big hair and an excessive amount of scrunchies—need we say more?

#3. Risky Business, 1983
As Joel Goodsen in Risky Business, Tom Cruise stars in one of the most iconic film scenes of all time. Attired in a crisp button-down shirt, high socks and Ray-Ban sunglasses, that living room dance scene is a style moment that continues to be channeled to this day.

#4. Working Girl, 1988
The decade of power dressing was cemented on the big screen as Melanie Griffith played the ultimate Working Girl in the 1988 film. Costume designer Ann Roth transformed Griffith’s character from a trendy, over-the-top Staten Island girl whose outfits epitomize “cheap” to a polished, power suit-wearing businesswoman in Manhattan (with tamer hair to boot). The before and after working-woman makeover perfectly captures the styles of the decade, from extravagant to professional.

#5. Scarface, 1983
Al Pacino may play a Cuban refugee who leads a drug cartel in Miami, but the plot line of the film is completely overshadowed by Michelle Pfeiffer’s incredible Halston-inspired wardrobe. Costume designer Patricia Norris created an impeccable look for Pfeiffer’s character, Elvira Hancock, including plunging necklines, slinky silhouettes and high slits that gave her the ultimate status of bad b*tch. The fashion worn by Pfeiffer’s character cemented her status as the cinematic queen of disco-era style, a look that would have been perfect for the dance floor of Studio 54.

#6. Footloose, 1984
Rebellious teenage style reaches a new level in this dance-centric film starring Kevin Bacon. When a teenager makes the move from a city to a small town that has outlawed dancing and rock music, an underground dance scene is born. Bacon is the ultimate rebel in his blue jeans and rolled up white t-shirt as he leads a pack of teens attired in rock ‘n’ roll inspired-looks.

#7. The Breakfast Club, 1985
One of the most iconic and referenced films of the ’80s, The Breakfast Club serves as a reminder in the importance of personal style and owning who you are. When five very different students are brought together in high school detention, the typecasting of high school stereotypes is brought to life. From the bad boy to the jock to the girly girl, these teens all prove that you can’t judge a book by its cover—or in this case, its outfit. While it’s not necessarily a fashion film, it’s one that shows the importance of honing in on your personal style.

#8. Flashdance, 1983
Two of the decade’s biggest crazes—exercise and dance—collided in this 1983 film. Cut-off sweatshirts, leg warmers and leotards illustrated the blurred lines between dancewear and streetwear during the ’80s. Jennifer Beals plays Alex Owens—the dancer that every teenage girl of the decade desperately wanted to be.

#9. Desperately Seeking Susan, 1986
If one person could be crowned the ultimate trendsetter of the ’80s, it would be none other than Madonna. The Queen of Pop stars as Susan in this comedy that follows a suburban housewife (Rosanna Arquette) who becomes fascinated with a New York woman (Madonna) she finds through the personal section of a tabloid. Madonna’s signature ’80s look of lace gloves, big hair and an abundance of jewellery plays a starring role in the film.

#10. Pretty in Pink, 1986
One of the Brat Pack films written by John Hughes, Pretty in Pink features Molly Ringwald as Andie Walsh, a stylish working-class high school senior who falls for a well-dressed preppy boy at school (played by Andrew McCarthy). The abundance of outfit changes in the film all prove one thing: pink hues pack a punch. Ringwald’s fashion-forward character sports all of the biggest trends from oversized sweaters to lace and bowler hats—swoon-worthy styling for any teenager at the time.

11) Weird Science, 1985
When two teenage geeks Gary and Wyatt create their dream-girl on a computer, she accidentally comes to life in the perfect form as Lisa (played by Kelly LeBrock). LeBrock was one of the It faces of the decade, the ultimate fantasy for any teenage boy during that era. The many outfit changes worn by LeBrock in the film take her character to every realm of ’80s fashion, from workout wear to glam night looks and everything in-between, making it a fashion feast for the eyes.

12) Girls Just Want To Have Fun, 1985
Before Sarah Jessica Parker was Carrie Bradshaw, she was teenage good-girl Janey Glenn inGirls Just Want To Have Fun. When Janey moves to Chicago she meets Lynne (Helen Hunt) who inspires her to let loose and disobey her father’s orders by dancing in a local TV show competition. The silly, light-hearded film tracks her character’s transformation from uptight good girl to dancewear-loving free-spirit. The fashion may not be good, but it was considered “chic” at the time.